Need to prove guilt beyond reasonable doubt protects us all 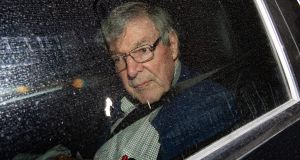 Cardinal George Pell was acquitted of charges of historical child sex abuse by the high court in Brisbane, which quashed his previous six-year prison sentence on appeal and ordered his immediate release from jail. Photograph: Bianca de Marchi/EPA

By and large, the fact that the full bench of the high court (Australia’s equivalent of our Supreme Court) found unanimously that his conviction should be quashed has not changed the minds of either camp.

Pell was immediately freed from the notorious Barwon maximum-security prison where he had been incarcerated along with serial killers, drug barons and terrorists. Two days before he was freed, three other inmates were hospitalised after abloody brawl, the latest in a string of attacks by inmates on each other. Pell spent 405 days in prison, not all in Barwon but mostly in solitary confinement.

Nor are his troubles over. There are civil cases pending, which have a much lower burden of proof, and questions still to be answered about the way in which he dealt with historical cases of sexual abuse of children by other clergy.

Nonetheless, no matter whether you like or loathe Pell, beyond reasonable doubt is a vital standard to protect all of us.

In a separate incident at another time in a crowded corridor, this time also dressed in full vestments, Pell is alleged to have grabbed the genitals of the complainant known as A

Sexual abuse is notoriously difficult to prove and court cases are often deeply traumatic for the complainant. Often, it comes down to one person’s word against another. In Pell’s case, though, this was not the case.

The abuse was alleged to have happened after two choirboys detached themselves from the closing procession of a cathedral Sunday Mass. There were 50 choirboys, 12 adult choristers, a choirmaster, altar servers, other celebrants, Archbishop Pell and Msgr Charles Portelli, the master of ceremonies, all in formal procession.

In a separate incident at another time in a crowded corridor, this time also dressed in full vestments, Pell is alleged to have grabbed the genitals of the complainant known as A.

There are no winners except, perhaps, future defendants who will not be convicted when an allegation has not been proven beyond reasonable doubt

Tragically, one of the two former choirboys, known as B, died of heroin abuse in 2014. He was asked by his mother if he had ever been abused and denied it. In itself, that means little. He could have been too traumatised to admit it to his mother.

But the reason the high court quashed the conviction was because of the unchallenged evidence given by Msgr Portelli and others. It was the practice that the large number of altar boys at the beginning of the lengthy procession waited for the ones at the end who were accompanying the archbishop and then bowed, two by two, in the direction of the crucifix in the sacristy before helping the sacristan clear away sacred vessels and so on.

The other celebrants would also have been in the sacristy. In short, it would have been a very busy place at the close of a solemn Sunday Mass.

Msgr Portelli and others gave evidence that the archbishop would always have been accompanied either by him or by the sacristan while still robed in his vestments.

In a withering paragraph, the high court judges said: “It remains that the evidence of witnesses, whose honesty was not in question, (i) placed the applicant [Pell] on the steps of the cathedral for at least 10 minutes after Mass on 15 and 22 December 1996; (ii) placed him in the company of Portelli when he returned to the priests’ sacristy to remove his vestments; and (iii) described continuous traffic into and out of the priests’ sacristy for 10 to 15 minutes after the altar servers completed their bows to the crucifix.”

Given this, the high court’s conclusion was inevitable: “There is a significant possibility in relation to charges one to four that an innocent person has been convicted.”

The high court found exactly the same about the other incident in the corridor but also commented: “The assumption that a group of choristers, including adults, might have been so preoccupied with making their way to the robing room as to fail to notice the extraordinary sight of the Archbishop of Melbourne dressed ‘in his full regalia’ advancing through the procession and pinning a 13-year-old boy to the wall, is a large one.”

The quashing of Pell’s conviction is not a triumph for anyone. No doubt Pell is glad to be out of the hellish Barwon prison but he is now an old man. He no longer occupies his post as prefect of the Vatican’s secretariat for the economy,  where he did sterling work clearing up the stinking corruption of the Vatican bank.

The complainant, while accepting the verdict, talks of the darkness that looms over his life. There are no winners except, perhaps, future defendants who will not be convicted when an allegation has not been proven beyond reasonable doubt.

1 With Lincoln looking on, the crowd dropped to their knees as 7pm approached
2 In six months we will be in the grip of a 1980s-style recession
3 Luke ‘Ming’ Flanagan bares his bottom half to European Parliament
4 Easing restrictions: What exactly will happen next Monday?
5 Michael McDowell: Black Americans fear the future and so should we
Real news has value SUBSCRIBE