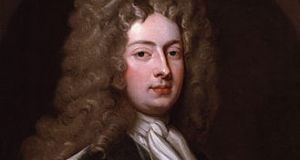 The writer William Congreve, who was born 350 years ago, began and ended life in England. But in between, he spent formative years in this country, thanks to his father’s military posting at Youghal.

He studied in Kilkenny College and Trinity, was good friends with Jonathan Swift, and wrote his first and only novel here, later published under a pseudonym, at the absurdly young age of 17.

That earned him an entrée into the literary circles of London, where he went first to practice law before taking to drama instead.

Championed by John Dryden in particular, he wrote a string of satirical comedies throughout the 1690s, all successes, until his last play, The Way of the World (1700), which was a failure at first but is now considered a classic and still regularly revived.

Alas, he did not have a high regard for the writing profession, retiring from it early to live off the royalties. His ambivalence to the trade surfaced in an exchange once with a religious critic, Jeremy Collier, who considered English drama of the period to be generally immoral and Congreve one of the worst offenders.

Contrary to legend, it was Congreve who wrote 'Music has charms to sooth a savage breast': of which the 'has' is invariably retrofitted to 'hath'

The playwright defended himself by saying that his first play had been a form of therapy, written “to amuse myself, in a slow recovery from a fit of sickness”. He had since regretted embarking on such a “difficult and thankless” discipline, one that had pitched him into “a perpetual war with knaves and fools”.

Presumably the clergyman was among the fools, although he seems to have had the last word on that occasion.

“Whatever his disease was, I am not to inquire,” Collier replied, “but it must be a very ill one to be worse than the remedy.”

A more damning critique of Congreve, arguably, was from one of his greatest admirers, Voltaire. Banished from Paris in the 1720s, the French philosopher spent years as an exile in Britain and made a pilgrimage there to the man he believed had “raised the glory of comedy to a greater height than any English writer before or since”.

Unfortunately, Congreve was “infirm and come to the verge of life” by the time they met.

And worse, in Voltaire’s view, was his tendency towards “entertaining too mean an idea of his own first profession, though it was to this he owed his fame and fortune”.

Voltaire’s letters continue: “He spoke of his works as trifles that were beneath him, and hinted to me on our first conversation that I should visit him upon no other foot than that of a gentleman who led a life of plainness and simplicity. I answered that had he been so unfortunate as to be a mere gentleman, I should never have come to see him; and I was very much disgusted at so unseasonable a piece of vanity.”

That “unseasonable” is presumably a reference to Congreve’s advanced age: he was all of 59 when Voltaire visited. But he was indeed on the verge of life, and died soon afterwards, just short of his 60th birthday.

If the at first underappreciated The Way of the World has come to be seen as his best work, the once popular The Mourning Bride (1697) has fallen badly out of fashion.

But the latter did contain at least two of his most famous lines, albeit almost always misquoted and often misattributed too.

Contrary to legend, it was Congreve who wrote “Music has charms to sooth a savage breast”: of which the “has” is invariably retrofitted to “hath” and the “breast” often changed to “beast”, with the quotation then typically credited to Shakespeare.

And it was Congreve too who wrote: “Heav’n has no rage, like love to hatred turn’d,/Nor hell a fury, like a woman scorned.” That one also gets refurbished a lot, while again being attributed to Shakespeare or sometimes Alexander Pope.

Given his attitude to writing, Congreve might not have minded much. Indeed he probably borrowed part of the quotations himself. The dangers of scorned women must have been a general talking point in the coffee houses of the time. In a 1696 play by Colley Cibber, for example, is the line: “He shall find no fiend in hell can match the fury of a disappointed woman!”

Yet another of Congreve’s witticisms, meanwhile, is still widely echoed more than 300 years later.

It occurs in his 1693 work about an ageing misogynist, The Old Bachelor, and must have been quoted since by many people who have never heard of it or him: “Thus grief still treads upon the heels of pleasure:/Married in haste, we may repent at leisure.”