Venezuela will not be easy win for Donald Trump 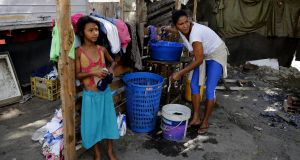 A child and a woman in Petare, Caracas. The people are being left behind in a political war between President Nicolas Maduro and self-proclaimed interim president Juan Guaido. Photograph: Leonardo Munoz

Juan Guaido’s self-declaration as Venezuelan president last week, following a call from Mike Pence (according to the Wall Street Journal), and his swift recognition by the United States, does little to heal the fractured country that is Venezuela today. Most of us will have seen the march of a million people in Guaido’s support last week. Less widely covered was Wednesday’s march of three million people in support of president Nicolas Maduro. The mobilisations are part of a fomented civil war, where the people of Venezuela are the abject losers.

I travelled to Venezuela in December 2017 , as part of a delegation overseeing the local and municipal elections. Following allegations of electoral fraud, I was keen to examine closely the electoral system, and to talk to ordinary people about their views on the political situation.

The shortages of food, medicines and basic supplies have driven many to desperation. But these shortages are driven to a large extent by the US embargo. This led the Congressional Research Service to warn, in November 2018, that the stronger sanctions being introduced by President Donald Trump “could exacerbate a difficult humanitarian situation, marked by shortages of food and medicine, increased poverty and mass migration”.

The paradox is that the people who are most affected by these shortages are those least angry with the government. The families of Caracas’s overcrowded barrios support Nicolas Maduro. It is people in the richer areas, where the supermarkets have supplies, who are most anxious to tell international journalists of the discomforts of life in Maduro’s Venezuela. A woman told me, with tears in her eyes, of the queues to get vital medicines.

The reason the barrios are calm, is because of an elaborate set of social supports received by the poorer citizens. Four million of Venezuela’s 19 million receive food parcels. Children are fed daily at school, and school attendance is up from 40 per cent to 90 per cent. Medicines are supplied, although with long delays, through local health clinics. Public transport is good, if crowded , and petrol is almost free. A full tank of petrol costs less than a can of soft drink. Two million social housing units have been built. But despite these progressive policies, many people are living from hand to mouth, depending on growing small crops and bartering possessions for food.

Not all of the economic problems come from the embargo. The failure of the government to diversify the oil-rich economy, to grow sufficient food for local consumption, has left the people subject to food withdrawal and hoarding by the big food importers.

The body which organises the elections, the National Electoral Council, showed us in great detail the electronic voting machines. Made in Taiwan, they are triggered by individual fingerprint, making multiple voting impossible. The voter receives a printed receipt of their vote, which is then placed in a separate ballot box. This allows a paper audit of the electronic vote. Some 50 per cent of votes are audited in this way. It’s a sophisticated system, and seems impossible to defraud.

In the vote I witnessed, the ruling Socialist Party won 70 per cent of the vote, while the opposition garnered 30 per cent.This seemed to reflect the vox pop I did of voters in the queue. The result was underwritten by a high-level delegation of Latin American Council of Electoral Experts (CEELA), including former Colombian electoral court president Guillermo Reyes, and the former heads of the electoral supreme courts of Honduras and Peru. They said the election reflected “peacefully and without problems, the will of Venezuelan citizens”.

Encouraged by the US, they decided to sit the election out and wait for intervention that would bring regime change

But that’s only part of the story. The observable technical truth of the election was undermined by the boycott of this election by many of the major opposition parties. Encouraged by the US, they decided to sit the election out and wait for the intervention that would bring regime change. It seems this week was what they were waiting for. An unpopular US president needs a foreign success story, and replacing the obdurate Maduro with a more compliant Guaido would ensure the flow of cheap oil northwards. Eliott Abrams, who lied in the Nicaraguan Contra scandal, will lead for the US. But I would not bet on this being an easy win for Trump.

While I was in Caracas, I took the cable car up to a mountainous walking area above the city, and talked with families out enjoying Venezuela’s famous hot chocolate. Political arguments were fiercely contested. One couple told me that Maduro’s policies were causing children to starve in the barrios. Others proudly showed their bags with pictures of Hugo Chavez and said their children looked forward to lives of dignity and progress. They would not tolerate the interventions that the US had made in Central America in the 1980s. As I watched the indoor ice skating and street theatre, it struck me that things are more complicated in Venezuela, than we in the West have been led to believe.

Betty Purcell is a journalist and author. She travelled to Venezuela as part of an international delegation overseeing the municipal elections in December 2017