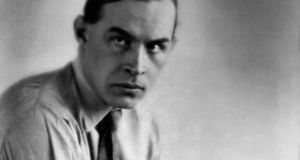 Remarque is the most remarkable thing about my quiet street in Berlin. Every day I pass a bronze plaque, high on the wall near my apartment block front door, reading: “In this building Erich Maria Remarque lived until 1929 and wrote ‘All Quiet on the Western Front’. Born 22.6.1898 Osnabrück. Died Locarno 25.9.1970.”

It was from here – looking out at the flat, modernist apartment facades, perhaps smelling the same fragrant linden trees in June – that Remarque returned to the muddy, bloody Belgian trenches he had experienced a decade earlier.

His journey paid off and (Im Westen nichts Neues), was published a 90 years ago this Thursday.

After simultaneous literary and commercial success it was granted the most notorious of literary recognition when, on May 10th, 1933, Nazi-supporting students tossed it, alongside the works of the Mann brothers and Erich Kästner, as fuel for the pyre beside Berlin’s state opera.

Unlike Kästner, Remarque wasn’t there to see the blaze. After years of public pillorying, he had left Germany five months earlier, a day after Hitler’s ascent to power.

It was the end of a life in Germany that began on June 22nd, 1898, in Westphalia. After a local school and university education he was drafted aged 18 and sent to Flanders on June 12th, 1917.

He was wounded five times in the course of a month on the western front, the last during the third battle of Ypres, and began writing in a military hospital about his experiences, supplementing them with stories of fellow invalids.

In the postwar decade, drifting and depressed like many of his“lost” war generation, Remarque turned to writing as a form of therapy. After rejections from other publishers, Ullstein’s Propyläen imprint liked his war manuscript but asked for further rewrites. It first appeared for a month from November 1928 as a serial in the popular Vossische Zeitung daily.

In a departure from his earlier drafts, Remarque opens his first chapter far from the trenches.

His narrator, Paul Bäumer, shows us soldiers chatting among themselves, satisfied with double portions of stew and cigarettes.

Then, in a slow reveal, Remarque explains how the field cook ordered food and prepared for 150, but only 80 soldiers from the company have returned from the front.

At a leisurely pace, Remarque takes the reader through the dehumanising of soldiers, as Bäumer realises he is being “prepared for heroism like a circus pony”.

He learns to recognise the signs of death “working its way out from the inside”.

“We are feelingless dead men who through a trick, a dangerous conjuring, can still run and kill,” Bäumer says.

“I am just 20 years old but I know nothing of life but doubt and death.”

Remarque’s spare description of the pointless reality of war still chills and is what made the book so powerful – and dangerous – on its publication 90 years ago.

Though Remarque subtitled his work Roman (novel), Ullstein sold it as a pseudo-memoir, promising readers a “personal experience without artifice, without distortion”.

That was a gift to German conservatives, who blamed their war defeat on internal betrayal rather than failure in the field.

Playing the man and not the ball, they accused him of being a traitor-fantasist because he had served “only” a month at the front before being injured. The controversy did no harm to book sales but hindered the German premiere of the 1930 US film version.

Outside a Berlin cinema, a mass protest was organised by Joseph Goebbels, the future Nazi propaganda minister. Inside the auditorium, he threw stink bombs and released white mice.

Once in power, Goebbels banned all Remarque’s works, stripped him of his citizenship and let his Nazi rumour mill claim the author’s birth name, Remark (his grandfather dropped the French spelling), was actually a reversal of his real, Jewish, name: Kramer.

The Nazi hatred of the author continued even a decade after he left Germany. His anti-Nazi sister Elfried was found guilty of “undermining the war effort” and beheaded. The bill – 495.80 Reichsmarks – sent to her surviving sister, Erna.

Remarque was by now far away from his homeland in Hollywood, having affairs with all of Hollywood’s great European leading ladies: Marlene Dietrich, Hedy Lamarr and Greta Garbo.

He became a naturalised US citizen in 1947, divorced his first wife Ilse Jutta Zambona a decade later and married Paulette Goddard, former wife of Charlie Chaplin.

All Quiet on the Western Front haunted Remarque for the rest of his life. Even in his posthumous novel Das Gelobte Land (The Promised Land), the novel’s narrator reflects on “the best things that people had created, in a time of the worst things people were capable of”.

A century after the first World War, when a draft-dodging US president flirts with explosive populism and strident nationalism, my former Berlin neighbour’s great anti-war novel remains a necessary, shattering read.