Move will kill off a budding, possibly successful relationship between the SDLP and UUP 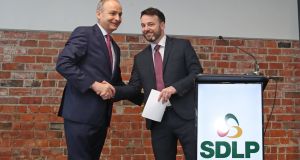 Politics in Northern Ireland has always obeyed Newton’s third law: “for everything that they do, there must be an equal and opposite reaction from us.” It makes life reasonably easy for those of us who are paid to observe the political and electoral process, but it also explains why things rarely change, even when we sometimes think they have.

So the news that the SDLP and Fianna Fáil have forged a closer link, albeit not a merger, got me thinking about Newton again. There is no doubt in my mind that unionists, of every variety, will view the link as just another manifestation of the pan-nationalist front (a phrase coined by former UUP deputy leader John Taylor, in November 1993, to describe the news that a report of talks between John Hume and Gerry Adams had been forwarded to taoiseach Albert Reynolds and minister for foreign affairs Dick Spring). Taylor viewed the development, as did most unionists, as an attempt by the Irish government together with local nationalist and republican parties to remove Northern Ireland from the UK.

Here’s the problem for unionists with the SDLP-Fianna Fáil link. Sinn Féin already has a foot in both the Assembly and Dáil and it is not impossible – although it strikes me as unlikely – it could be part of a governing coalition after the next Irish election. The link raises the possibility of Fianna Fáil influence at the heart of Northern politics. More worryingly for unionists, if the SDLP were to take their seats in a rebooted Executive it puts Fianna Fáil influence at the very heart of Northern Ireland’s government, too. In other words, in the next executive unionists could find themselves facing nothing but all-island nationalism and the distinct possibility that either Sinn Féin or SDLP-Fianna Fáil could be in or propping up the Irish government. Unionists would not relish that prospect.

Another knock-on effect of the SDLP link to Fianna Fáil is that it makes it impossible for the UUP to cut a deal with the SDLP. In 2015 and 2016 it looked as though UUP leader Mike Nesbitt and the SDLP’s Colum Eastwood were building a relationship which would allow their parties to present themselves as a viable electoral alternative to the “failing, fractious, DUP–Sinn Féin axis” in time for the next Assembly in 2020. They even went into opposition together in 2016 (although both had enough seats to enter the executive). But the unexpected collapse of the executive in January 2017, followed by an election in which both parties took a serious electoral hit, killed off a budding, possibly successful relationship; a relationship which could not be repeated if the SDLP is linked to Fianna Fáil.

At the 2017 election, Sinn Féin came within one seat and 1,200 votes of eclipsing the DUP and taking the post of first minister. Unionists also lost their overall majority in the Assembly, finding themselves in a 40 out of 90 minority. While there is a possibility that a serious challenge from SDLP-Fianna Fáil could knock Sinn Féin back a bit (and Peadar Tóibín’s as yet unnamed party could also be a factor if it fields candidates) unionists will be concerned – particularly on the back of a “difficult” Brexit – that Sinn Féin could yet nudge ahead of them. So they will be considering their options.

The most obvious one is a pan-unionist pact. For instance, a DUP and UUP coalition, in which they endorsed joint candidates and campaigned under one banner, would allow the winners to be counted as a single entity. In 2017, the DUP won 28 and the UUP 10. Under one banner that would be counted as a total of 38, allowing them a comfortable margin of victory over Sinn Féin– even if it saw off its nationalist rivals – and comfortably retaining the post of first minister within unionist hands.

That may prove an attractive option for both the DUP and UUP; although I’m not sure the UUP would accept Arlene Foster as leader of the DUP in such an arrangement. In a poll for a just-published book on the UUP (The Ulster Unionist Party, Country Before Party?) 56 per cent of UUP members said they supported a full merger with the DUP, or electoral pacts and alliances “when it suits us”. At a moment when a reheating of the relationship with the SDLP seems unlikely; when the UUP is struggling for relevance and survival; and when unionists probably should be working more closely together to promote and secure the union; increasing numbers of unionists may warm to a strategy that brings the pro-union family closer together.

It has been discussed in the past and there have been pacts, too, mostly for Westminster elections. But a joint vehicle and single banner for Assembly elections hasn’t been tried. And that’s because there are some very specific policy differences between the UUP and DUP; as well as a residual resentment from the UUP side about the DUP “stealing our clothes”. But, just two years away from Northern Ireland’s centenary, demographics are slowly shifting away from unionism and the challenges from nationalism and republicanism are becoming harder to shrug off with the bravado of old.

One thing is clear: unionism cannot survive if it is scattered so broadly and prone to serial fractiousness. It requires policy and strategy coherence. The UUP and DUP leadership will brush off talk of merger and coming together, but such a course now seems inevitable to me: in precisely the same way that a formal SDLP-Fianna Fáil link, and Sinn Féin’s U-turn on electoral participation in the North 30 years ago was and is inevitable for all-island nationalism and the end goal of unity.

The news that civic nationalism has organised a conference in Belfast on Saturday – Beyond Brexit: The future of Ireland – will spook unionism further: because, for the first time in a generation all of nationalism and republicanism seems to be looking beyond Northern Ireland and towards “inevitable” unity. Irrespective of what happens with Brexit – and I still think it will be a very soft landing – nationalism and unionism within the North seem increasingly irreconcilable and irreparably polarised.