Una Mullally: We need to remember the true meaning of Pride

Discussions around Pride are now similar to those about Christmas

Tens of thousands of people take to the streets of Dublin as part of the Pride parade 2017. Video: Dan Lloyd 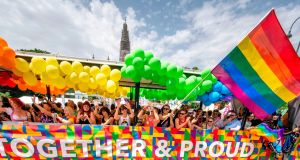 I don’t know when Pride “month” became a thing, but it’s here now, built into brand strategies and advertising budgets. Pride “month” exists because June is the time that most Pride events happen around the world – where they’re permitted and often where they’re not – June being the month when 50 years ago, the Stonewall riots in New York kicked off, although of course there was LGBTQ activism before then.

Jacob Tobia, author of Sissy: a Coming-of-Gender Story, recently said that discussions around Pride are now similar to discussions about Christmas; that we’re forgetting the true meaning of it, and that it has become overly commercialised and commodified. It is a privilege to be able to discuss these things in societies where LGBTQ people have a semblance of rights and where equality and anti-discrimination legislation and thinking is at the very least a superficial goal.

The critical discourse of Pride as a moment and movement is repetitive. Some people embrace mainstreaming as a cornerstone of visibility. Many understand the virtues and flaws of acceptability politics, in which many queer people have participated in pursuit of broader equality goals. Many look gimlet-eyed at the corporate and commercial presence and commodification of Pride “season”.

Alternatives to Pride are as old as the mainstream Pride movement itself, fluctuating with the politics and context of the day, from the Dyke March to Trans Pride to the Gay Shame movement. Some people are concerned with asking how a community can be radical and countercultural when queerness is being mainstreamed. Others just want to have a good time and grab some merch.

The GAA and the Garda participating in the Pride march in Dublin this year feels significant, as the protest and celebration subsumes the most conservative and mainstream aspects of our society. The group Queer Action Ireland will hold an alternative Pride event, for those who reject gardaí marching in the parade in uniform, and “recognise the hypocrisy of RTÉ acting as an official media sponsor”. Fair play to them. Resistance should be as present as participation.

On Twitter, the Garda posted a photo of squad cars jazzed up with a rainbow design. Seeing that photo made me think of conversations I’ve had with gay and lesbian gardaí who have suffered awful abuse and bullying within their organisation. It made me think of the Garda sergeant in Dublin who allegedly harassed a female colleague on the grounds of her sexual orientation to the point of allegedly mocking up a fake registration plate that read FAG1 and placing it over the number plate on her car, and then brought a High Court action in an attempt to stop an internal investigation over his alleged homophobia.

And it also made me think of the amazing work of Garda inspector Paul Franey who has dedicated his career to improving representation and the lives of LGBTQ people within an organisation often hostile to difference. It made me think of gardaí who are not out to their colleagues and how they must feel when they see a rainbow design on a squad car.

One Pride does not fit all. Fragmentation, separatism, defiance, occupation, rejection, protest, abstention, boycotting and participation are all valid positions. On an academic level, it’s easy to rail against the commercialisation and mainstreaming. But Pride does weird things to people, including compelling Taylor Swift to release the worst song of her career last week.

To me, on a practical level, on an experiential level, on an emotional level, the feeling of being surrounded by thousands of “your people” – in all their diverse identities and lives – is always a hugely emotional one for me, particularly seeing the much more evolved social support structures that exist for queer kids and young people now.

The only correlation I can think of is something many Irish people have experienced – walking into some far-flung Irish pub somewhere in the world to watch an All-Ireland final. The comfort, the familiarity, the quiet solidarity rooted in identity, this is the emotional interior that cannot be colonised by big tech companies walking in a march, or gay politicians trying to offset their neoliberalism with a veneer of social progressiveness.

And Pride is also rooted in pain. It is in many ways not just about coming out, it’s about coming out the other side. I recently chaired a panel discussion as part of Call It Out, a civil-society campaign aimed at combating homophobia, biphobia and transphobia. The room was tense with the emotional toll of trauma. Attacks happen all the time, the most recent high-profile one being against two women on a bus in London, and in the aftermath of which, one of the women, Chris, wrote an astonishing piece for the Guardian.

“Make the extraordinary reaction to our attack the norm,” she wrote. “I beg you to amplify and channel this energy to hold accountable the intersecting web of elected politicians, government agencies and corporations who have reinforced a status quo of clearly delineated inequality long before this single attack in 2019. Redirect your money from rainbow capitalism to people-of-colour-led organisations striving for justice . . . Question why the photo of two attractive, white cisgender women compelled you to post about Pride for the first time.”

A rallying call if there ever was one.

1 Exiting Level 5: Ministers to push for reopening of shops, restaurants and churches next week
2 Donald Trump directs team to co-operate on Biden transition
3 Alison Curtis: My guilt at not going for a second pregnancy
4 How to gift your child a house deposit . . . tax free
5 Covid-19: Hairdressers, gyms and religious services could return next week
Real news has value SUBSCRIBE