Una Mullally: Noel Whelan was a hero and an ally 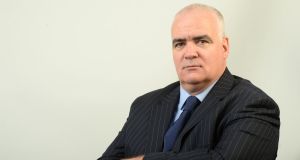 The joke going around the LGBT community in the aftermath of the 2015 referendum was that Noel Whelan had spent so much time with gay people, he was starting to look like Colm O’Gorman.

Noel had been sporting a new beard and a spring in his step. I remember seeing him at Dublin Castle in the blurry haze of jubilation. If you played any kind of role in the marriage equality campaign, you know it and you feel it. It embedded itself so deeply in our human make-up that its impact was almost cellular.

Some of the straight allies during the marriage equality campaign emerged from the most unlikely of quarters. They stepped up to widen the scope of national empathy. They were the Tom Currans and the Mary McAleeses and the Noel Whelans, and so many more.

At Noel’s funeral on Saturday, his wife, Sinead McSweeney, spoke so beautifully about his generosity and energy. The huge numbers that gathered included many from the LGBT community who have lost a great ally in Noel. Part of his legacy is also demonstrating what allyship looks like, the sort of allyship that is not performative nor composed of empty gestures.

Noel would probably balk at being depicted as so central to the campaign as he has been in recent days. He spoke openly about coming late to the issue, and that he was just doing his bit.

He wrote about the respectful nature of the foot-soldiers in the Yes Equality campaign, their dignity, their passion and enthusiasm, and the sophisticated knowledge of digital communication that permeated the movement. He deferred always to those for whom the issue mattered the most. That is what allyship looks like. Taking part, not taking over.

In the immediate aftermath of the marriage equality referendum, he wrote about crying on Dame Street having left Dublin Castle. Even then, he was still asking questions.

“How had the rest of us been blind for so long to the prejudice visited upon the gay and lesbian community?” he wrote.

“Why had those of us in the mainstream been deaf for decades to their cry for equal recognition? How was it that we had failed to appreciate the sting of discrimination they felt? How come in their sense of isolation it meant so much to them that a straight man in the public eye, who was not a politician, had spoken out for their right to love and marry as equals?”

Noel understood, first-hand, that straight allies could bear the burden of the campaign more lightly. Sure, they were all up for a fairer, more equal society, but the deep-rooted emotional necessity of that win didn’t cut so deeply.

He was honourable and dignified and generous and good

It takes a seriously empathic person to understand that, and to use that position as leverage to get stuff done, rather than retire to the self-interest of “This doesn’t concern me.”

At a time of heightened rhetoric online, punishment tweetings and manufactured division, it’s important to remember that the LGBTQ community is a welcoming one, that subsumes people from all walks of life.

Wherever you go, these global and local communities are sponge-like Ellis Islands, soaking in the tired, the poor, the huddled masses yearning to breathe free, the wretched refuse and the tempest-tossed.

The LGBTQ community has always embraced allies, no matter how unlikely they may seem. The community in Ireland observed that this guy – with his Fianna Fáil background and mainstream media pundit credentials – wanted to help, that he would go out to bat for us, and was serious about getting stuck in. The emotional weight of such solidarity does not evaporate.

Noel understood that a social revolution was happening in Ireland. He was a divil for detail, but he also was great at the bigger picture. While so much political analysis gets muddled in the minutiae of irrelevant parochial battles in small-time territories, he zoomed out.

“The real impact,” he wrote about the abortion referendum last year, “will be across all parties and outside the party system altogether. One thing which does seem clear is that this referendum marks both a gender shift and a generational shift in Irish political participation.”

“I have never seen anything as fresh and female as this campaign,” he wrote. Where other pundits patronised the Repeal campaign, Noel saw it for what it was, and understood the energy of people “new to formal politics” but “highly skilled in the modern campaign arts”.

He understood how transferable the skills were from feminist and LGBT activism to winning national political campaigns, and how such participation was changing Ireland forever.

Noel was full of grace. That might seem like a odd description for a big guy with those bushy eyebrows and loose shirt collars, but he had so much grace. He was honourable and dignified and generous and good. In a world that frequently defaults to individualism, he used his privilege for something bigger than himself.

The beauty of his contribution to the marriage equality campaign is not just that he went and did something himself, but that we all did it together, with the likes of him.

We all enter the world alone, but Noel has left it with a community that will never forget that he was there for us when we needed people like him the most. May he rest in power.

1 Covid-19 globally: Victoria, Australia, reports most deadly day
2 Meath creche awaits test results after two cases of Covid-19
3 Are we really facing the death of the office?
4 Coronavirus: Non-essential travel from US set to be banned within days
5 Coronavirus: No additional deaths in State but 68 new cases
Real news has value SUBSCRIBE