Una Mullally: Insurance industry claims about fraud do not add up

If fraud is so rampant, why is the industry not reporting cases to gardaí?

When questioned on insurance fraud numbers by Sinn Féin's Pearse Doherty members of the insurance industry had to revise figures down at a Joint Committee hearing. Video: Oireachtas 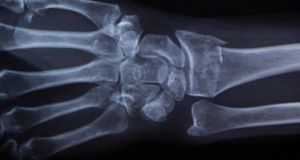 An X-ray of a hand. Allianz Ireland reported 48 cases of suspected fraud to the Garda since June 2018, out of 5,000 claims. Photograph: Thomas Peter

In 2017, profits in the insurance industry jumped by 1,300 per cent. That’s right, a one thousand three hundred per cent increase in profits in one year. How on earth did that happen? Last Thursday, the bosses of FBD, Axa and Allianz sat dumbstruck in front of Sinn Féin finance spokesperson Pearse Doherty at the Oireachtas finance committee. FBD made €50 million profit in the last two years. Axa made €89 million profit last year. Happy days.

The Maria Bailey debacle kick-started yet another conversation about insurance and personal injury claims in Ireland. Small-business owners in particular were very vocal about claim culture, and the often ridiculous insurance claims they have to deal with. Nobody is saying that we don’t have an issue with frequent and exaggerated claims, but there are serious questions to be asked about how the industry is dealing with what it characterises as an epidemic of fraudulent claims.

The industry’s clarion call about its high and rising premiums is that it’s all down to fraudulent claims. It’s a neat scapegoat. If people didn’t make so many dodgy claims, insurance premiums wouldn’t be so high. But where are all these fraudsters? Why aren’t our courts filled with thousands of people going down for insurance fraud? Doherty’s line of questioning followed this simple logic. The reality is that insurance companies are not reporting to the gardaí the level of suspected fraudulent cases that they say are happening.

Doherty put it to FBD that they said 20 per cent of claims were fraudulent. FBD gets about 60,000 to 65,000 claims a year. “So you’re suggesting a fifth of those are fraudulent,” Doherty said. Jackie McMahon, FBD’s chief claims officer, said: “Well, I have given it to you on value there the number, as opposed to on hard count number. But yes, 20 per cent.” From this, Doherty deduced that 15,000 claims must then be fraudulent. McMahon said 15,000 might be a bit high. Doherty said: “Let’s say 10,000, being generous to you, given that you said 20 per cent . . . How many fraudulent claims do you think FBD gets per year? Fraudulent claims. Because the real question is, how many have you reported?”

Doherty asked if they had a system where they could report fraudulent claims. McMahon said yes, that they reported them to the gardaí. “Okay,” Doherty continued, “you don’t need a level of proof. It’s up to the gardaí then to investigate it, would that be correct?” “That’s correct,” McMahon said.

Doherty asked again about the number of fraudulent claims FBD had reported to the gardaí, “Because it’s definitely not 10,000, let me tell you. It’s not 15,000. It’s definitely not the 20 per cent figure that you have talked about. So I want to get to real facts here, instead of the spin from the industry, because it doesn’t add up.”

Doherty asked Allianz how many they had reported. Forty-eight since June 2018. Out of how many claims? Five thousand. Forty-eight out of 5,000 is less than 1 per cent, so why isn’t the other 19 per cent reported to the gardaí?

“The indicators are, we have to investigate and make sure we are not wasting Garda time. So we investigate to a certain level before we pass them,” Allianz Ireland chief executive Seán McGrath said. Such a process of investigation into 20 per cent of suspected fraudulent claims, and passing on 19 per cent, means the real figure is 1 per cent, surely?

McGrath’s words started to catch in his throat, “Not, not, em, [pause] not totally. So depending on what happens them along the way . . . No we don’t accept fraudulent claims, but some of them don’t turn out to be provable or have evidence.” So they’re not fraudulent, then. Doherty correctly said that it is not up to the industry to prove fraud, but to report a suspected crime to the gardaí.

Doherty then moved on to Axa Ireland chief executive Philip Bradley. How many fraudulent claims had his company reported to the gardaí? Fifty since 2013. Thirteen of those claims ended in prosecutions. AXA gets about 5,000 injury claims per year.

So what’s going on? No one is saying people don’t make fraudulent claims, but the industry’s own figures – and certainly its own actions – don’t back up the alleged blight. If fraud is so rampant, why isn’t the industry reporting cases to the gardaí? If it’s such a strain on the industry – so much so that everyone who takes out an insurance policy is impacted – why isn’t the industry tackling it? Surely not because they stand to benefit from rising premiums while all these mysterious fraudsters get the blame? Maybe we’ve been talking about the wrong kind of insurance fraud all along.