Una Mullally: How I was caught up in an Iranian fake news operation 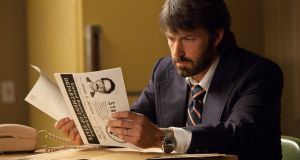 Hailstones in August, not being able to get a table later than 6pm in a restaurant on a Thursday evening, finding myself attached to a suspected Iranian fake news operation – these are all things I did not expect to happen last week.

A colleague emailed me last Wednesday alerting me to an article on the cyber security website FireEye, with the headline: “Suspected Iranian influence operation leverages network of inauthentic news sites and social media targeting audiences in US, UK, Latin America, Middle East”.

One of the allegedly fake websites uncovered as part of the investigation into this operation is a site called The British Left. In the “About Us” section of the website, it declares: “The British Left is a news organisation completely independent of any advertisers, funders, companies, political organisations or political parties. Una Mullally, our editor in chief, teamed up with a group of extraordinary people for form The British left [sic] in 2012. With absolutely no financial backing or outside investment, we have rapidly built a brand new media outlet from scratch through the determination of our progressive values, a vibrant team and engaging content”.

FireEye passed the information they had uncovered to Facebook, who began to remove social media accounts. Along with Facebook, Twitter and Alphabet (Google) removed hundreds of accounts tied to the alleged propaganda operation.

An air of plausibility

The British Left website lifted the “About Us” section from the website The Canary, and substituted my name. I had never heard of the website until then, and have never written for it and am certainly not its “editor in chief”. It was suggested I should clarify this by tweeting the fact that I have nothing to do with the website, which I did. A short while later, a friend texted “turn on Channel 4 News”. The suspected Iranian influence operation had made the dastardly mainstream media. Several jokes with my friends about Argo later, I got in touch with FireEye.

In print, journalists have long utilised selective editing as a manipulative tool, creating narratives and insinuations

The folks at FireEye were intrigued about a real journalist’s name making it on to one of the websites involved in their investigation, as they believe this bolsters the theory that at least some amount of research had gone into the content on these websites in order to give them at least an air of plausibility. At the time of writing, the website is still online, as it’s hard to scrub those kinds of things from the internet as opposed to social media accounts. There is no one technically “in charge” of pulling it down. Other accounts Google deleted across YouTube and Blogger had ties to the Iranian state broadcaster, Islamic Republic of Iran Broadcasting.

“This influence operation linked to Iran aims to promote political narratives in line with Iranian interests, including anti-Saudi, anti-Israeli, and pro-Palestinian themes,” Lee Foster a manager in information operations at FireEye said: “The activity we have uncovered is significant and demonstrates that actors beyond Russia continue to engage in online, social media-driven influence operations as a means of shaping political discourse. It also illustrates how the threat posed by such influence operations continues to evolve, and how similar influence tactics can be deployed irrespective of the particular political or ideological goals being pursued.”

The whole thing is weird and random, but the future of fake news isn’t ropey-looking news sites thrown together by “bad actors” and those seeking to disrupt democracy or increase polarised debate, nor is it bots on Twitter nor conspiracy theories shared on Facebook. The future is something so sophisticated that it will discombobulate our eyes and ears to the point that even a viewer or listener aware that it may not be real will question their own interpretation. Will we be able to believe our eyes? Maybe not. Actually, that’s the present. This technology already exists. The future probably holds something far more sinister.

In March, the London Times detailed an audio project recreating John F Kennedy’s “lost” Dallas speech, which he was due to deliver the day he was assassinated. A total of 831 existing JFK speeches and interviews, and 116,777 “sound units” were analysed to create the speech that was never spoken. The “JFK Unsilenced” project was widely shared and praised, but I found it unnerving. The potential for manufacturing things that were never said by world leaders for nefarious means is clear.

Last year, researchers from the University of Washington created a tool that, as reported in The Verge, “takes audio files, converts them into realistic mouth movements, and then grafts those movements on to existing video”. To illustrate this technology, audio clips of former US president Barack Obama were grafted as new mouth shapes to create the illusion of a contemporary speech when it was in fact one from a different time, including an interview from 1990. The result is alarming, even when the audio is relatively benign.

In print, journalists have long utilised selective editing as a manipulative tool, creating narratives and insinuations. To some degree, we trust journalists to be honest messengers. But as technology advances, the lines between fake and real can be blurred, Iran or no Iran. In the meantime, I’m off to watch Argo again.

Pope’s words on homosexuality must find form in papal document

1 Sacha Baron Cohen: ‘I had to ring the alarm bell and say democracy is in peril’
2 Love in a time of Covid: John and Mary marry over 40 years after first meeting
3 Father unaware partner and baby dead until gardaí called to raise alarm
4 Coronavirus: Close contact numbers fall in sign restrictions may be working
5 Two hundred Irish retailers for all your online Christmas shopping
Real news has value SUBSCRIBE