The State’s monolingualism is problematic in cultural, social and economic terms 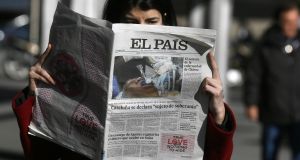 In his speech The Necessity for De-Anglicising Ireland, delivered in 1892, Douglas Hyde warned that the failure to revive the Irish language would leave Ireland vulnerable to excessive cultural influence from Britain: “We will become what, I fear, we are largely at present, a nation of imitators . . . lost to the power of native initiative and alive only to second-hand assimilation.”

One hundred and twenty five years later, while no language can in itself protect from rampant globalisation, there is more of a grain of truth in the idea proposed by Hyde and others that Ireland’s status as a predominantly English-speaking country is not entirely unproblematic in cultural, social and economic terms. In his book Ireland 1912-1985, historian Joe Lee raised questions about the psychological implications of the decline of Irish and argued that Ireland’s monolingualism both reduced our capacity to learn and limited the range of experiences on which we could draw.

Although 13 per cent of the Irish population speak a language other than Irish or English at home, the State has yet to catch up with that social reality and a monolingual ideology is firmly entrenched in officialdom. Despite the status of Irish, the State has never got to grips with providing services in Irish and provision for immigrant languages is patchy. Eurobarometer surveys on language ability show Ireland near the bottom in terms of multilingual competence. In 2012, 60 per cent of those surveyed were unable to speak anything other than their “mother tongue” compared with less than 20 per cent in countries such as the Netherlands and Sweden.

Similarly, Ireland is towards the bottom of the table in terms of respondents who agree “totally” with the idea that everyone in the European Union should be able to speak at least two languages. The linguist James McCloskey has written of the pernicious effects of monolingualism in countries where English is dominant. Indeed, the Eurobarometer surveys show the UK even lower than Ireland on the competence scale with numbers studying languages plummeting. Brexit should be a wake-up call for Ireland in this regard, and an opportunity for us to cast off the shackles of monolingualism.

Ireland’s poor record on multilingualism has been addressed in various policy documents. Languages Connect: Ireland’s Strategy for Foreign Languages in Education contains worthwhile proposals, a report by colleagues at NUI Galway on language and migration recommends viewing multilingualism as an asset and not a problem, while the Migrant Integration Strategy calls for much-needed improvements in interpretation.

Multilingualism in Ireland cannot be considered in isolation from Irish, but there is little integration between such policies and the 20-Year Strategy for the Irish Language and no plan to promote Irish among immigrants. Teaching and learning Irish should be viewed as a springboard for building multilingualism, but the Department of Education’s flawed review of the exemptions process for Irish suggest a policy to dismantle its core status by stealth. In short we need a strategy for all languages to develop multilingualism while protecting the position of Irish.

Formal language learning cannot be separated from what is happening outside the classroom and a broader approach is required. One such area ripe for improvement is the media, whose influence is more powerful than ever as traditional formats and platforms converge. English-language media from Britain and the United States have dominated Ireland for decades and are a powerful conduit of cultural messages with a far-reaching impact on public opinion. This leaves us particularly susceptible to discourse from English-speaking countries, a point also emphasised by Joe Lee. It is virtually impossible to buy a newspaper in a language other than English in Irish shops, British newspapers make up a large part of the print market and television and radio are overwhelmingly Anglophone.

In response to the argument that someone wishing to hear German or Polish news can find it online, it is important to remember that existing domestic media services are still powerful players with market dominance and the absence of other languages sends the message that only English matters. The fragmentation of mass media has led to the “long tail” of niche online services and while the internet is highly multilingual, individual websites get lost in the noise and lack the status of established outlets.

Any multilingual media strategy for Ireland should involve providing multilingual news and information from other viewpoints as a counterbalance to cultural messages in English but also as a way of fostering language learning. It should also give voice to immigrants speaking languages other than Irish and English. Channels such as ARTE on the French-German border and the Special Broadcasting Service in Australia could be models for successful television stations in multiple languages.

Programming from other European public service broadcasters could be broadcast on a separate Saorview channel and subtitled in order to increase cultural awareness and multilingual ability. In line with the Broadcasting Authority of Ireland’s aims to increase media plurality and diversity, the valuable but limited multilingual programming on community radio could be increased.

Multilingual short-form digital content involving immigrant languages in Ireland could be developed and commercial broadcasters also need to reflect multilingualism more than is the case at present. Brexit will not mean the end of British dominance of the Irish media market, but such initiatives would at least offer an accessible alternative to wider sources of information in various languages and support existing policy to develop multilingualism in Ireland.