Cliff Taylor: Ireland can – and must – get all adults vaccinated by September

Scotland, now vaccinating 60,000 a day, shows a rapid ramp-up can be achieved 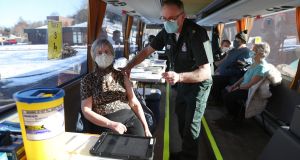 Paramedic Paul Kelly vaccinates Marion Matheson inside a holiday coach outside Culloden Medical Practice near Inverness, Scotland. The Scots have accelerated their vaccination programme to more than 60,000 jabs a day in recent days. . Photograph: Andrew Milligan/PA

In Scotland they call them jags. Here we call them jabs. The Scots have accelerated their vaccination programme to more than 60,000 jags a day and more than one million people have had their first vaccine.

And of course we are frustrated that the UK got its order in ahead of the European Commission and is thus now well ahead. There will be much more controversy about this in the months ahead – and rightly so.

But, to use that awful phrase from the financial crisis, “we are where are are”. And Ireland is delivering out all the vaccines that are arriving.So let’s look at Scotland as an example of what we can do in the coming months as supply rises, or at Northern Ireland where similar proportions of the population are being vaccinated.

Both examples show clearly that when the supply of vaccines is there, the numbers can ramp up really quickly. The same can, indeed must, happen here.We will need to go from 40,000 a week to 40,000 a day. Given the supply, there is no reason why we should not have all adults vaccinated by September.

It is interesting to look at Scotland as it has roughly the same population and land area as the Republic. It has had its vaccine roll-out controversies too . Like the rest of the UK there is debate about the gap between doses of some vaccines. And this week first minister Nicola Sturgeon warned that supply problems might require some slowdown of vaccinations in coming weeks. But Scotland shows that it is possible to ramp up a programme quickly and get very large numbers done.

The 60,000 recorded on a number of recent days – in atrociously cold and snowy weather – is the highest since the programme started. More than 350,000 vaccinations were done in the week to last Thursday.

If Ireland can move to this level as supply ramps up in April and May – and plans are being put in place to do so – we will quickly make progress and can meet the target of having the adult population fully vaccinated (two jabs if needed ) by September.

On a reasonable calculation, everyone in the top 12 priority groups, including over 50s, anyone with a serious medical condition and large groups of key workers could all be done by early in August.

Scotland is using similar strategies as Ireland intends to employ; using mass vaccination centres – including one in Glasgow doing up to 5,000 jabs a day – GPs and local clinics.

Here, part of the prevailing gloomy narrative is that we are way behind and will take ages to get going. Ministers seem scared to even talk about the vaccination programme, surrounding predictions with caveats and talking down what vaccines can achieve. It seems part of a general uncertainty about what to do next.

But this will be a numbers game – vaccines in to the country and vaccines out to the public. And it can be done.

There are uncertainties for sure – but in a month or two the supply risks will ease as more vaccines get approved. Both Taoiseach Micheál Martin and the head of the vaccine task force, Professor Brian MacCraith, have in recent radio interviews identified the second quarter of this year as a key period. This is when the big rise in numbers needs to happen.

Professor MacCraith has spoken of the hope of getting vaccine supplies of one million a month from the second quarter, enabling the administration of 250,000 jabs a week. The Scottish experience shows that this kind of vaccination level is eminently achievable.

If supply allows, the aim should be higher. There is a strong chance that supply will rise beyond 1 million a month – perhaps to 1.5 million or more in May-July period. Pfizer is ramping up production, the Commission is squeezing AstraZeneca and if the Johnson&Johnson vaccine is approved it could come on stream by late March. As it requires just one vaccination, it would be a massive boost to the programme.

We can’t underestimate the logistical challenges in rolling out a new IT platform, getting sites up and running and finding enough staff. But it is beyond obvious to say that money should be thrown at this.

If the High Level Vaccine Task Force which is overseeing this, or the Department of Health and HSE which are implementing it, say they need more cash, then they should jut get it. The business case can be done on the back of an envelope – lockdown is costing us €1.3 billion a month, And of course there is the much more important reason of saving lives.

While for now EU governments, including our own, can points to Brussels and supply problems, the pressure will soon move to national capitals. Supply is coming on stream quickly.

The vaccines will be there, it will be a question of getting them out to the people and then, crucially, of managing this in the context of a policy of easing restrictions, getting Covid numbers down and having a strategy to keep them down while reopening.

As a small country with huge public support for vaccination, we should be able to get this done.There is a plan and while it has had to be remade a few times already, the next week or two will see the programme move out to the general population in the shape of the over-85s.

Ramping up will have its blips and problems, but is clearly possible. In Scotland around 20 per cent of people have had their first jabs, while the number in Northern Ireland is similar.

A frazzled population, which has endured longer and more serious lockdowns than in most other EU countries is looking north of the Border and across the Irish Sea and seeing big progress.

As supply ramps up here, we have to get this one right. If Scotland can vaccinate 60,000 people a day, across the Highlands and Islands , in the snow, then we simply have to be able to do something similar. If the Government gets this one wrong, it’s time in office will quickly run out.