Twenty-five years before Greta, there was Severn and we ignored her

Time running out to make transition to low-carbon future safe, just and inclusive

25 years before Greta Thunberg took to the stage at the UN, 12-year-old Severn Cullis-Suzuki spoke at the plenary session of the Rio Earth Summit. Video: Rio Earth Summit 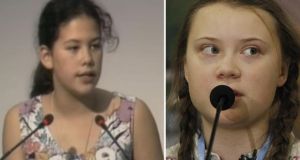 ‘Coming up here today, I have no hidden agenda. I am fighting for my future. Losing my future is not like losing an election, or a few points on the stock market. I am here to speak for all generations to come . . . We hear of animals and plants going extinct every day, vanishing forever . . . Did you have to worry of these things when you were my age? All this is happening before our eyes and yet we act as if we have all the time we want and all the solutions. I’m only a child and I don’t have all the solutions, but I want you to realise, neither do you. If you don’t know how to fix it, please stop breaking it.”

Reading this you could think it was from any one of the youth climate strikers. Greta Thunberg, or Saoi O’Connor from Cork. Instead, these words were spoken more than 27 years ago, by then 12-year-old Severn Cullis-Suzuki at the plenary session of the Rio Earth Summit in 1992.

She became known as “the girl who silenced the world for five minutes”. Imagine if the world had listened. Countless lives could have been saved from climate-induced natural disasters. We could have spared some of the 60 per cent of animals that have disappeared since the 1970s and pulled a million more species back from the brink. We may have never needed to coin the term “eco-anxiety”, a word and condition becoming more prevalent as the impacts of our climate and ecological crisis become clearer. Young people would never have had to take to the streets to beg for a chance at a liveable future, with slogans such as “You’ll die of old age, I’ll die of climate change.”

We would have had a relatively easy and achievable chance of addressing global warming and the ecological crisis.

Instead, as David Wallace-Wells’s Uninhabitable Earth notes, more carbon dioxide was pumped into the atmosphere in the years since the Rio Summit than in all the years prior to it. We now need emissions to peak by 2020 at the latest and then curve starkly downwards which will require “war-like mobilisation” and is predicated on building no new fossil-fuel infrastructure.

Emissions instead are increasing. Regardless of what we do now, we will face climate-change impacts. So now it’s about trying to mitigate the worst of these, both in terms of halting emissions so we can try avoid runaway climate change, and putting structures in place to help those impacted.

Against this backdrop, the UN Climate Action Summit will take place in New York on September 23rd. The United Nations secretary-general, António Guterres, has called on leaders to come with “concrete, realistic plans to enhance their nationally-determined contributions by 2020”. He says this in reference to the fact that despite the fanfare of the Paris Agreement of 2015, countries’ nationally-determined contributions, even if implemented, bring us more than three degrees of warming, far beyond the 1.5-degree limit which, according to the Intergovernmental Panel on Climate Change, is the safest level for human and ecological well-being.

In light of this, it’s important that rather than placing all hopes in the UN agreements and summits – which leaves us open to complacency with announcements such as the Paris Agreement success, and despairing despondency when President Donald Trump declared he would take the United States out of the agreement – we feel empowered at the local grassroots level to take action and create pressure from below.

Guterres is placing his hope in the student strikes, and general pressure from citizens and the growing environmental movement to get leaders to act. This is indeed where we can find cause for hope. Millions around the world are mobilising to solve our climate and ecological crisis. People are starting to realise that beyond individual-based solutions we must fundamentally change the fossil fuel-based system and models of consumption which got us here, and policy will be key.

At home in Ireland, this means halting plans to build a LNG gas terminal in Kerry and stopping the issuing of licences for oil and gas drilling off the Irish coast. It means realising that addressing climate change gives us a chance to improve societal well-being by investing in public transport, cycling lanes and citizen-centred renewable-energy policy such as feed-in tariffs which in countries such as Germany have facilitated democratic sustainable energy transitions. It means realising that one way or the other our society is going to change due to climate change, but by enacting policy now we can make sure the transition is as safe, just and inclusive as possible.

With the UN summit and global climate strike just around the corner, Cullis-Suzuki’s words ring poignantly true: “At school . . . you teach us how to behave in the world. You teach us to not to fight with others, to work things out, to respect others and to clean up our mess, not to hurt other creatures; to share, not be greedy. Then, why do you go out and do the things you tell us not to do?

“Parents should be able to comfort their children by saying: ‘Everything is going to be all right, it’s not the end of the world, and we are doing the best we can.’ But I don’t think you can say that to us any more. Are we even on your list of priorities?”

Let’s hope leaders prioritise a liveable future for today’s youth. Let’s hold them to account to do so. Persistently phone your TD, call into their clinic, join or set up an environmental group in your area. Ask the young people in your life how they are feeling about climate change and listen to their answers. As a first step, join them at the global climate strike on Friday.