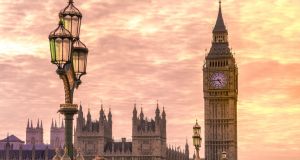 Proposals, some more realistic than others, for a tunnel between Britain and Ireland have a long history and were debated at Westminster. Photograph: iStock

On July 7th, 1899, the First Lord of the Treasury, Arthur Balfour, met a delegation led by Lord Londonderry, a former Lord Lieutenant of Ireland, to hear their proposal for a tunnel between Ireland and Great Britain.

Some years earlier, in 1866, an army officer, Capt William Macbay, had suggested that causeways should be built between St David’s Head in Wales and Carnsore, and between Port Patrick in Scotland and Donaghadee. They would be sufficiently wide to carry roads and railway lines but would have apertures for shipping which would be bridged over.

The hills on both sides would supply rocks to tip into sea. These would be taken out on barges and the manual labour would be provided by the 20,000 convicts who were idling or doing unproductive work in the prisons. The captain didn’t claim to be an expert in engineering but he reckoned that the project wouldn’t be more difficult than achievements such as the pyramids, the great wall of China or the Roman wall in the north of England.

Unlike Macbay’s proposals, Londonderry’s ideas had a semblance of practicality. During the intervening decades a number of large tunnels had been bored through mountains on the continent and the possibility of a tunnel between England and France had been discussed in parliament on a number of occasions and had the support of William Gladstone.

Before meeting Balfour, the delegation had obtained the advice of Ireland’s leading railway engineer James Barton, an enthusiast for the project. The shortest route would be from the Mull of Kintyre to the Giant’s Causeway but 100 miles of railway through difficult terrain would be required on the Scottish side. Another route, from Portpatrick in Wigtownshire to Donaghadee, had to be ruled out because of a deep depression called Beaufort’s Dyke and the route they proposed was under the relatively shallow sea between Portobello, near Stranraer, and Islandmagee. The distance was 24 miles, but Barton had assured them that a few extra miles of tunnel wouldn’t frighten the engineers “in these days of gigantic feats of applied science”.

They suggested that the government might finance the construction of the tunnel and its approaches at a cost of £12million which would later be subscribed by private sources if the treasury would guarantee annual interest of 3 per cent.

The office of first lord was then distinct from the office of prime minister and, as the UK’s senior treasury minister, Balfour was sceptical. Even if a tunnel were built, “the great stream of traffic” would continue on more southern routes, and he wondered if the government would be liable should the project fail to be completed or the tunnel failed to compete with existing shipping. He promised to give the matter “very full consideration” and the issue didn’t arise again in any serious way until 1918.

In August of that year, Gershom Stewart, the MP for the Wirral, tried to interest Lloyd George in a tunnel and in November a parliamentary committee on transport in Ireland discussed possibilities. Sir Francis Fox, a widely respected civil engineer, then told the MPs that the project would be more difficult than a tunnel to France because of greater hydrostatic pressure in the North Channel. He also noted that the Irish and British railways had different gauges and he believed that a mooted cost of £8,000,000 was optimistic.

On July 9th, 1929, the Lord Privy Seal, JH Thomas, gave what might have been the last word on the subject when he told the House of Commons that he doubted if the project was technically or economically feasible.

But that wasn’t the end of the matter and the notion has been raised repeatedly since then including in recent weeks. It seems to provide a sort of blank canvas on which enthusiasts can superimpose their hopes. MacBay believed that his causeways would smooth away and blend those distinctions of a social and national character that existed to the prejudice of unhappy Ireland.

In 1907, a historian, Lecker Lampson, suggested that a tunnel would bind the populations of Ireland and Great Britain with bands of steel. They would intermarry and blend and old prejudices would be forgotten.

In November 1916, an English newspaper envisaged a time when a traveller from America could disembark at Galway and board a train for Baghdad or Vladivostok.

Girshom Stewart argued that a tunnel would help to end misunderstandings between the two countries. Seventeen years later, his namesake, William Stewart, the MP for South Belfast, saw the building work as a source of employment and tried unsuccessfully to get the Northern Ireland government to finance a feasibility study.

In March 1956, Hartford Montgomery Hyde, the MP for Belfast North, suggested that a tunnel would make Northern Ireland part of the United Kingdom “in fact as well as in name”.

Will it ever come to fruition? Perhaps, if air travel becomes severely restricted because of climate change and the politicians have enough tunnel vision, but the cost-benefit analysis will be interesting.