Fintan O'Toole: We need to sing a Christmas lullaby to ourselves 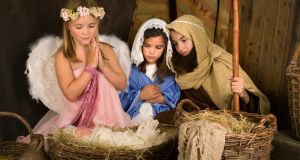 Behind Christmas and Craciun and Noël and Nollaig, there is that universal experience of trying to get a baby to sleep

Here is a Christmas story for contemporary Ireland, courtesy of Déirdre Kirwan, who was for a long time principal of Scoil Bhríde primary school in Blanchardstown. The school, as I’ve mentioned before, was, like so many in Ireland, flooded with new languages as immigrants arrived to make their lives here. The pupils spoke in 51 different tongues at home, ranging from Afrikaans to Xhosa and from Arabic to Yoruba. It had to develop new ways to explore words in the classroom.

In the autumn, one sixth class teacher made a pact with the kids (all around 11 years old) not to speak the word “Christmas” before the beginning of December – but they could, in a particular lesson, refer to it in any other language. So the Romanian children said “Craciun” and the others realised that it sounds like “Christian”. The Francophone children said “Noël” and the others said it sounded like “Nollaig” in Irish.

The teacher herself was in a choir and she was learning the lovely old Latin carol Dormi Jesu, so beautifully set by John Rutter. So she put up the words and invited the kids to work out what they meant using their own languages.

Here’s how they did it.

Dormi Jesu: The Romanian speakers recognised “dormi” as “sleep” and the Francophones associated it with “dormir” and the English speakers with “dormitory” – so it’s a lullaby. Thus: Sleep, Jesus!

Mater ridet: They all got “mother” from “maternity”. The teacher explained that “ridere” is Italian for “smile”. Thus: Mother smiles.

Quae tam dulcem somnum videt: A Romanian kid said “dulcem” is like “dulce” in her home language, meaning sweet, and that the word in Italian is “dolci”. The teacher mimed a somnambulist and one of the kids got “sleep”. So: something about sweet sleep.

Si non dormis, Mater plorat: A Russian speaker said that “plorat” sounds like “plakat”, which means “cry”. A Romanian pupil said “ploaie” means “rain” in that language, which led the French-speakers on to “pleut” (which means the same in French) and “pleurer”, which goes back to “cry”. So: If you don’t sleep, Mother will cry.

Inter fila cantans orat: A pupil suggested that “cantans” sounds like “canadh” (singing) in Irish and like “choir” in English. “Inter” evoked interschools debates and interacting with other schools. So something like “in between”? The teacher added that in Latin this sense can be applied to time – so here it means “while” or “meanwhile”. For “fila”, one pupil offered the Yoruba word “fila”, which means “hat”. Another offered “filaments”, so threads maybe. Thus: something about singing while making threads?

Blande, veni, somnule: They already had “soft” for “blande” and “sleep” for “somnule”. The Francophones thought of “venir”, to come. Thus: come, soft sleep.

So they got nearly all of it. I would construe it in English as something like this:

To see so sweet a slumber.

If you don’t sleep, Mother weeps.

While she spins, she sings her prayer:

The beauty of it is that so many of us have been there. From before time and history, before we even knew we were homo sapiens, we have done this – sung to our babies to try to get them to drop off into dreams. We’ve done it on savannahs and in igloos, in caves and in mansions, in stables and in refugee camps, in air raid shelters and in suburban bedrooms, in log boats and jet planes, on every continent and in every corner of the earth. And it is one of the most human of things because it is so impure, so evenly compounded of exasperation and love, of irritation and gentleness, of enervated exhaustion and tender devotion: I adore you but please, Jesus, will you shut up now.

So what those children in Blanchardstown were decoding so cleverly was not just a puzzle of language. It was an image of commonality. The Nativity has very specific religious meanings for many people. But behind Christmas and Craciun and Noël and Nollaig, there is that universal experience of trying to get a baby to sleep. It is itself encoded in the ambiguity of a word in English – care. It evokes both our capacity to take care of others and our state of being care-worn. We long for Christmas to have only the first meaning, but we know it will always have the second too.

We all need to sing – in Arabic or Irish, in Yoruba or Romanian – a lullaby, not just to our babies but to ourselves. We are the same in this, the same as those who have gone before us, the same as those with whom we share this troubled time. We all need to be wrapped up tight and warm and to feel more cared for than careworn, to drop off into dreams, even if we will have to wake too soon and spin again. I wish you all that drowsy comfort.