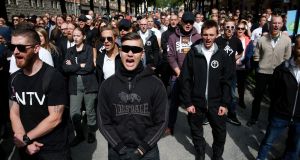 Supporters of the neo-Nazi Nordic Resistance Movement in Kungsholmstorg square, Stockholm, in August: a third of links shared via Twitter with Swedish political hashtags were sensationalist, conspiratorial or designed to mislead. Photograph: Fredrik Persson/EPA

Reports from Sweden in the run-up to last weekend’s election felt familiar to those who had watched the Brexit and Trump votes: a national conversation preoccupied with immigration, an increasingly confident right wing and a highly toxic online information environment. Commentators in the US and much of western Europe predicted a seismic shift to chauvinistic resentment politics. It didn’t turn out like that, and early analysis points towards at least two factors that might have strengthened the resilience of Sweden’s democracy.

International interest came in part from signs that the online conversation in Sweden was threatening the democratic process. The Oxford Internet Institute (OII) found that a third of links being shared via Twitter with Swedish political hashtags were “junk news” – sensationalist, conspiratorial or false material designed to mislead or deceive. This was far more than they found when looking at Germany, France or the UK. A separate study by the Swedish Defence Research Institute found that more than one in 20 political tweets were by “bots” or automated accounts.

The rise of the Sweden Democrats also prompted commentary. This party’s anti-immigrant “welfare chauvinism” has been compared to France’s Front National or Italy’s newly governing Lega Nord. Almost half of the bots found sympathised with the Sweden Democrats, and many (42 per cent) of these specifically attacked the governing Social Democrat party.

The Sweden Democrats were predicted in some polls to take one-quarter of all votes. But when the preliminary results came in on Sunday evening, they had secured less than 18 per cent. They had increased their result on the 2014 election by just less than 5 per cent, but so too did other smaller parties like the left, centrist and Christian Democrat parties, who together were up 6.5 per cent.

The Economist’s European columnist, Jeremy Cunliffe, tweeted that those UK and US commentators predicting a right-wing landslide failed to take account of Sweden’s proportional representation system.

Online activity attacking another party might be a viable tactic in a two-party system like the US, but it doesn’t work as well when you are one of eight alternatives. This theory is backed by the exit poll by broadcaster SVT which shows that, while many voters had deserted the governing Social Democrat party, they voted in higher numbers for a green or far-left party than they did for the Sweden Democrats.

Online activity attacking another party might be a viable tactic in a two-party system like the US, but it doesn’t work as well when you are one of eight alternatives

Sweden could therefore be experiencing something like what Ireland saw in 2011; a fragmentation into smaller parties when voters become frustrated with the existing offering. In proportional systems, the number of seats parties win in an election quickly drops when the public starts to move away. In winner-takes-all systems like the UK and US, political parties can maintain dominance even as vote share drops. Unacknowledged resentment does not disappear, however. Especially in a digital age.

Swedish political scientist Dr Anamaria Dutceac Segesten, who studies the role of social media in democracy, offers another insight. She points to the substantial viewership of and trust in public broadcasting in Sweden as a limiting factor for the impact of online disinformation. It is easier for falsehoods to go unchallenged when people move into media bubbles or don’t trust what they hear from mainstream channels. SVT is by far the most popular source of news in Sweden and is trusted by 90 per cent of Swedes which, according to Pew Research, is more than any other national broadcaster in western Europe. Italy ranks near the bottom at 65 per cent.

Interestingly, the Swedish national broadcaster has managed to maintain the trust even of those who hold what Pew considers “populist” views. Almost 80 per cent of these trust SVT. Only in the Netherlands has a national broadcaster maintained higher trust of populist voters, another country where a recent predicted surge in far-right voting failed to materialise.

The Swedish elections show us that some democracies are proving more resilient to emerging threats to democracy than others. In this case, early analysis suggests that a responsive electoral system and shared, trusted sources of news are helpful. Against that benchmark, Ireland does not do too badly.

A study by Dublin City University and the Broadcasting Authority of Ireland earlier this summer found that RTÉ was the most trusted brand in Irish news, scoring an average trust rating of 7.39 out of 8 (followed closely by The Irish Times).

A lot more needs to be done to improve the trustworthiness of the news people find online, and one concrete step RTÉ could take is to improve its digital offering and in particular the shareability of its content. This would enable more Irish citizens to find trustworthy news where and when they look for it. It might also bolster wider policy efforts to strengthen our democracy.

Liz Carolan is a senior associate at the Open Data Institute and adviser to the Open Data Charter. She was co-founder of the Transparent Referendum Initiative (tref.ie)

1 The five ‘hidden’ reasons that stopped me losing weight
2 Why our love for Leo is withering on the vine
3 No obvious signs of injury on remains of McGinley children
4 Una Mullally: Those attacking Sinn Féin have become cheerleaders in reverse
5 Snow expected as Met Éireann issues status yellow weather alert
Real news has value SUBSCRIBE