The Swedish election in one word: Lagom 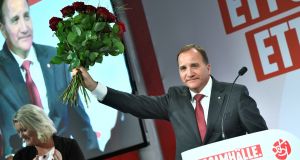 A stench of Scandi-Schadenfreude hung over much of the foreign coverage of Sweden’s general election .

The message was always the same – whether it was wrapped in mock, middle-class concern or jingoistic glee. After years telling us how to be stylish and tolerant, the coverage suggested, the rise of the far right showed the smug Swedes aren’t so perfect after all.

If also cut the other way. After years of believing ecstatic outsider reviews, many Swedes felt obliged to now accept as gospel the negative write-ups, too. They began to doubt the propaganda dispensed from childhood that Sweden is the best country in the world.

But here are two numbers worth considering. On Sunday 84.4 per cent of voting Swedes turned out to vote. And 82.4 per cent of those that turned out rejected the far-right Sweden Democrats (SD). From this angle, the glass of Swedish democracy looks rather full.

The far-right surge – expected to hit 20 per cent or more in early summer – fell away as protest voters reconsidered their options.

Did they really want to vote for a party founded by Nazis and filled with MPs who, when not mocking feminists or attacking homosexuals, call immigrants “poisonous snakes” and belittle Holocaust survivors?

When SD wunderkind Jimmie Åkesson took to the stage on Sunday evening he insisted – after recovering from an ill-timed coughing fit – that gaining nearly five points to almost 18 per cent made his party a force to be reckoned with. Attention must be paid. The result was impressive and yet disappointing, considering how the SD framed the refugee crisis as a modern-day Siege of Vienna.

No amount of Muslim scare stories, backed by ominous mood music or online bot trickery, could lift the far-right above the symbolic 20 per cent mark. In the electoral pecking order, Sweden’s far-right ended the evening where it began: third.

It is third, too, in the Nordic populist club: just behind Norway’s far-right Progress Party, which scored 15.3 per cent last year, and far behind the Danish People’s Party, which secured 27 per cent in 2014.

There’s no denying the Swedish populists ran an effective campaign by suggesting one common denominator – immigration – was behind every voter concern, from public security to hospital waiting times. And they will drive a hard bargain on immigration in upcoming talks – presuming anyone wants to talk to them. But that is not a given after an impressive election-night turn from Stefan Löfven. The Social Democratic prime minister was last to appear in public on Sunday night, not surprising given he had lead Olof Palme’s once-proud party to its worst result in a century. But Mr Löfven didn’t try to spin a silk purse out of a sow’s ear of a result. After acknowledging the problems behind voter desertion, he pointed out the obvious: Sweden still works.

It was such an untypical politician’s speech that my Swedish friends fell silent and listened closely.

One suggested that Mr Löfven sounded more like a statesman in those few minutes than he had in his previous four years in power.

His address came too late to influence the election, but not the upcoming difficult talks. All “decent” parties in Sweden had a moral responsibility to try new things for a stable government, he said.

It was a tearless graveside oration for the old Swedish bloc system of centre-left and centre-right camps, that functioned for decades, but will no longer work in the new hung parliament.

Either the Social Democrats and the conservative-liberal Moderates will throw their lot in together, or someone will have to defect from one camp to the other to crate a parliamentary majority. But even a minority government can govern effectively in Sweden, once it doesn’t face a consistent opposition majority.

The challenge now is for Sweden’s politicians to accept – intellectually and emotionally – the new political reality and adapt accordingly.

With a budget due in two months, there is no time for oversized (male) egos to block a new government, triggering fresh elections that would be a shot in the arm for the far right and a slap in the face for Swedish voters.

They came in droves to the valstugor or election cottages, clustered on squares around the country. They are where volunteers, not politicians, break down their party’s politics into ordinary language for curious voters – including scores of young people.

In an era of smartphone addicts, social media bubbles and fake news, Sweden’s ongoing embrace of offline, analogue politics was a welcome and impressive sight.

In a nod to the latest Nordic buzzword sweeping Britain, one way to understand Sunday’s election is Lagom or the art of balanced living.

1 One hundred Irish retailers for all your online Christmas shopping
2 Miriam Lord: All test and no trace makes Jack, and heaven knows who else, a very ill boy
3 What I learned about male desire in a sex-doll factory
4 Gym owner plans to defy restrictions and open
5 Des Bishop apologises to Traveller community for comments in interview
Real news has value SUBSCRIBE