Why does nationalism exude a seductive appeal? 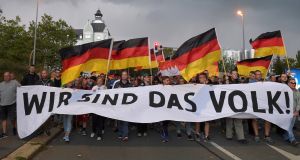 Far-right demonstration in Chemnitz, Germany: The banner reads “We are the people”. Photograph: Matthias Rietschel/Reuters

On Sunday, Sweden handed impressive electoral gains to its controversial nationalist-conservative party, the Sweden Democrats. With 17.6 per cent of the vote, they are now a close third behind the Moderates and Social Democrats, moving them into the mainstream of Swedish politics. The surge in support for an anti-immigration party in Sweden, a country traditionally renowned for its welcoming attitude toward immigrants, holds huge symbolic significance for other nationalist movements in Europe, and appears to reflect a steady upward trend in European support for nationalist and Eurosceptical parties.

This trend is part of a shift in public sentiment, in Europe and America alike, that has taken many seasoned observers unawares. Just when it seemed as if globalisation and European integration were unstoppable, we beheld the shock elevation of a TV celebrity to the White House on a platform promising to “make America great again,” the passing of Brexit, the dramatic Spanish standoff with Catalonia’s independence movement, and the consolidation of nationalist and Eurosceptical political parties in numerous EU member states such as Germany, Denmark, Austria, Italy, Poland and Hungary.

The knee-jerk reaction of many political commentators, academics and journalists to these developments is to view nationalism uniformly as a creeping political disease, the work of some parochial-minded holdouts who are not enlightened enough to embrace the cosmopolitan dream of universal peace and fraternity.

Few would deny that nationalism has an ugly underbelly – German Nazism and Italian fascism are part of its dark legacy. But if we could get down off our moral high horse for a moment, we might begin to interrogate the reasons behind the recent resurgence of nationalist sentiment, and take the full measure of the political and cultural crisis which is driving it.

We might begin to interrogate the reasons behind the recent resurgence of nationalist sentiment, and take the full measure of the political and cultural crisis  driving it

To understand why citizens might rally to the defence of a national community, let’s start with the simple fact that none of us can live as pure global citizens. Virtually all of us strive to anchor our life in some community. Only in the context of a concrete community can I play a role that confers meaning on my life and find myself confirmed in my identity by the love and recognition of my fellows.

This necessity for community might, theoretically, be satisfied at a very local level, for example, in a small village or town. However, in a society with a specialised economy and advanced technologies, it becomes expedient to establish ties with individuals and organisations beyond one’s immediate social enclave, giving rise to greatly expanded social spaces.

Consequently, the necessity for a sense of community can no longer be exhausted at the local level. People feel the need to identify with the values and culture of larger-scale communities, to feel “at home” not only in their families and villages, but in the city and country at large.

This desire to feel at home is skilfully harnessed by political leaders, who weave a more or less compelling narrative about how “we” the “people” form a separate community, with a natural, inalienable right to govern our own affairs. This narrative serves to legitimate governments’ claim to act in the name of “the people” and reassures ordinary citizens that the large society they interact with is not some amorphous sea of randomly connected individuals, but a “national community”, their community.

This coping mechanism worked remarkably well for several generations, when national cultures and economies formed more or less self-contained bubbles and evolved at a manageable pace. However, it was violently disrupted when the pace of social change was put into overdrive by a volatile and fast-moving global economy, and the ground rules of social interaction were destabilised by the influx of a large number of immigrants not socialised into the national culture of their host countries.

Nationalist ideology seems like a poor fit for multicultural and multiethnic societies. However, people may understandably take refuge in it in the face of a global economy that throws traditional industries and markets into disarray, national governments whose policies are held ransom by other global actors, the criminal and anti-social behaviour of some immigrants which brings a bad name to immigrant communities, and the growing perception that national languages, customs, and ways of life are under siege.

It is tempting to use nationalism’s most violent and destructive expressions as a pretext for dismissing it wholesale. But this would be a serious error, for nationalist movements often express a legitimate desire to slow down unsustainable levels of social change, and to vindicate a society’s right to defend its distinctive values and way of life. As such, any serious response to the rise of nationalism must address its underlying motives, rather than simply condemning it as a piece of brutish sectarianism, racism or xenophobia.

The need to ground one’s life in a culturally cohesive, enduring community is an inescapable dimension of the human condition. Like it or not, we must either accept some version of the nationalist narrative as a coping mechanism for resisting disruptive social change, or else search for a fresh narrative that prepares citizens for change, while also addressing their need to be anchored in a place they can call home.

David Thunder is a researcher and lecturer at the University of Navarra’s Institute for Culture and Society, and author of Citizenship and the Pursuit of the Worthy Life