Trump undermines journalists but he does not kill them 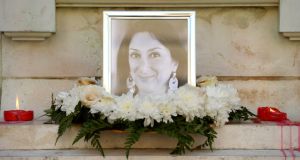 The Great Siege monument in Valletta, Malta, was turned into a shrine for journalist Daphne Caruana Galizia after she was killed by a car bomb last October. Photograph: Matthew Mirabelli/AFP/Getty Images

Donald Trump is many things, a lot of them bad, but he’s not among the world’s foremost oppressors of the media, as the Committee to Protect Journalists (CPJ) appeared to designate him this week. In defence of the non-profit group, which named Trump the winner of its prize for “overall achievement in undermining global press freedom”, the wheeze was a response to the US president’s contemptible announcement about his planned “fake news” awards ceremony.

In other categories, the CPJ bestowed “awards” on Xi Jinping of China (“Tightest Grip on Media”), Myanmar’s Aung San Suu Kyi (“Biggest Backslider”) and Recep Tayyip Erdogan of Turkey, victorious in both “Most Thin-Skinned” and “Most Outrageous Use of Terror Laws Against the Press” categories. Runners-up included Egyptian president Abdel Fattah el-Sisi, Vladimir Putin of Russia and Poland’s Andrzej Duda.

Trump’s denigration of the media is dangerous, but to put him in the same bracket as all-out autocrats such as Putin, Erdogan or Xi on this count seems to me wrong-headed, or at least premature. It also distracts from those areas in which Trump poses a more immediate threat, and from those parts of the world where journalists risk their lives every day simply by doing their work.

For a sense of where the media is really up against it, read the latest annual report from Frontline Defenders, published this month. Among the cases it documents are those of the Maltese investigative journalist and blogger Daphne Caruana Galizia, who was killed by a car bomb last October, or the Azerbaijani blogger Mehman Huseynov, who was arrested and tortured by police because of his work documenting corruption within the ruling party.

The report notes that Turkey remains the top jailer of journalists in the world, with 158 media personnel imprisoned.

According to Reporters Without Borders, 65 journalists were killed, 58 were taken hostage and 326 detained worldwide in 2017. One of the deadliest places for reporters was Mexico. In March last year, Miroslava Breach Velducea, a reporter for two newspapers in Chihuahua state in northern Mexico, was shot dead while in her car. A few days before her death, she wrote a story about an armed conflict between two leaders of a criminal group linked to the Juárez cartel.

The investigation has stalled and her family have struggled to get access to details of the police inquiry.

At least five journalists were targeted last year by gunmen in the Philippines, whose president, Rodrigo Duterte, once said: “Just because you’re a journalist you are not exempted from assassination, if you’re a son of a bitch.”

It’s true that Trump’s open undermining of the American media sets a bad example and sullies the reputation of a country that has long seen itself as a beacon of media freedom, but Putin, Erdogan and Xi hardly needed his imprimatur to stifle independent media.

The threats to media freedom in the US may get worse under Trump, but in general they predate his rise

In the United States itself, Trump’s craving for mainline media approval and his unprecedented private openness to reporters is accompanied by a public campaign of vilification against the trade. His vitriol certainly has real-world consequences, as reporters who received death threats after public denunciations from the president would attest.

But standing between Trump and the media are strong constitutional guarantees of press freedom and freedom of speech, and robust legislative and judicial systems that can resist executive over-reach. That’s one reason why Trump’s desire to harden the libel law is doomed: neither the courts nor Congress is amenable to the idea.

Indeed, Trump himself has given a jolt to morale in the industry by underlining its importance, delivering it a bigger audience and allowing it to showcase its strengths.

The threats to media freedom in the US may get worse under Trump, but in general they predate his rise. Stressed business models and a fracturing of the audience are long-established trends. The collapse of Gawker Media after a high-profile privacy action in 2016 showed the vulnerability of the media to lawsuits financed by rich third parties with ulterior motives. Barack Obama left behind a “flimsy legacy” on press freedom and access to information, argues Reporters Without Borders.

Revelations about mass surveillance by federal institutions, and a series of controversies over the government’s attempts to identify the sources of leaked information by monitoring reporters or applying legal pressure are long-standing causes for concern.

One of the most damaging trends, however – and one that Trump has certainly made worse – is what Index on Censorship, a campaigning group, has called the “widespread and low-level animosity that feeds into the everyday working lives of the nation’s journalists, bloggers and media professionals”.

Trump’s construction of his own parallel reality, with its “alternative facts” and its reflexive dismissal of awkward coverage as “fake news”, nourishes that animosity and in turn feeds off it. It’s an insidious trend, and one that will long outlast this disgraceful presidency.