Tom Arnold: How Ireland can influence the world 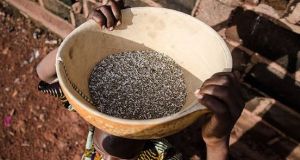 Irish Ambassadors from around the globe will meet in Dublin next week to strategise on the direction of our foreign policy post-Brexit. They will plan for changing Irish relationships with the UK, EU-26 and the wider international community, and identify opportunities for Irish influence at European and international level.

It is difficult for a small country to carve out a distinctive policy position and to achieve influence internationally. But it can be done through combining credible domestic policies, high-level political advocacy and partnering with like-minded countries and institutions.

For example, Ireland has played an internationally recognised leadership role on policy for global food and nutrition security within the past decade. The lessons from this success are relevant in planning for the future.

In 2008 the world faced a “food price crisis” involving rocketing prices for the main staple crops of wheat, maize and rice, leading to food riots in over 30 countries and an increase in the number of hungry people to one billion.

Also in early 2008, the respected health journal The Lancet published research on the cost of undernutrition in terms of child mortality and stunting, and proposed a set of practical measures, complete with costings, to address the problem.

This combination of changing politics, science, and economics, allied to public opinion, led to significant policy shifts and action to improve food and nutrition security.

The Irish government had established a Hunger Task Force in 2007, charged with identifying “how Ireland’s foreign policy and aid budget could have the maximum impact on poverty and hunger”.

The task force’s report was launched at the UN in September 2008 by UN secretary general Ban Ki Moon and taoiseach Brian Cowen.

The timing of the report was very good, and the recommendations – that a greater focus should be put on smallholder African agriculture and on early childhood nutrition, that Ireland should seek to play a leading advocacy role in promoting global food and nutrition security and that 20 per cent of the Irish aid budget should be spent on food and nutrition security – were seen internationally to be highly relevant.

As a consequence, between 2008 and 2013 Ireland played a key – and disproportionate – leadership role influencing international policy. It was based on the government implementing the recommendations of the Hunger Task Force, and engaging in high-level political advocacy. Policy consistency was illustrated when Irish policy remained the same through a change of government in 2011.

The political benefits accruing from Irish leadership were seen in a series of partnerships with the UN, the EU, the UK and US governments.

In looking to the future Ireland should seek to continue its lead role in fighting global undernutrition. But the focus should broaden through placing food and nutrition at the heart of Irish foreign policy in a more strategic, long-term and whole-of-government approach.

The changing nature of malnutrition should also be recognised. Six of the top nine risk factors to global health now relate to diet, with major long-term consequences for public health and finances.

This problem will inevitably move up the international political agenda within the next decade. In response, Ireland requires a comprehensive national food and nutrition policy to continue Irish leadership in tackling global undernutrition.

Three other linked topics should be considered as pillars of future Irish foreign policy – the Sustainable Development Goals (SDGs), the Paris agreement on climate change, and migration. Specific commitments should be made under each pillar, but, in addition to being a pillar in its own right, food and nutrition should form an integral part of the other three pillars.

The SDGs are the agreed global development agenda until 2030, and were finalised in 2015 under the co-chairmanship of Ireland and Kenya at the UN.

A commitment to prioritising climate change will necessarily involve a rewrite of current Irish policy to make it credible at home and abroad.

Adoption of migration as a priority would signal that Ireland will commit to working with its EU partners, the African Union, African countries and regions to address the root causes of migration, including conflict, governance standards, climate change and poverty.

Minister for Foreign Affairs Simon Coveney has recently initiated a review of Irish development aid policy. The past decade has shown how an intelligent and well targeted aid programme can be a key part of Ireland’s wider foreign policy, can achieve influence on important global issues, and deliver political benefits in so doing.

The challenges of a post-Brexit world mean that the choices made in future foreign policy will be crucially important in shaping Irish political influence and economic success.