Post-Brexit UK will be lonely on edge of Atlantic Ocean 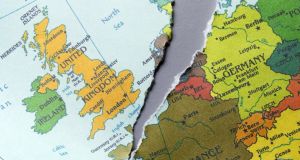 By embracing Europe, Ireland made it a success story. The UK has always stayed at arm’s length in an almost Victorian romance instead of a passionate relationship.

When it comes to the Brexit negotiations, members of the European Parliament have an enormous responsibility: we will have to say either yes or no to the withdrawal agreement at the end of the talks in early 2019. Only a few months before the European elections, we will have the final word on the texts which will engrave the conditions for the divorce and prepare the EU27’s future relationship with the UK. It is with this sense of responsibility that the members of the European People’s Party (EPP) Group in the European Parliament will meet in Wicklow this week to discuss Brexit and its impact. It is no coincidence that we chose Ireland to host this meeting: no EU country will be more affected by the UK’s decision to leave the EU than Ireland.

Some 62 per cent of Irish people feel they will be impacted by Brexit in their daily lives, according to an exclusive opinion poll conducted by Red C Research for the EPP Group. The economic consequences of Brexit will be huge. The historic Common Travel Area means that Ireland is fully integrated in the British economy and this predates the EU. But more importantly, there is the Belfast Agreement which only worked because both Northern Ireland and the Republic were part of the EU. With 30,000 people commuting across the Border every day for work and about €6 billion worth of goods traded across the Border in 2016 it is unimaginable that hard borders will be recreated.

We want to find solutions for the communities of the island of Ireland because it is unthinkable that people who have learned to live in good harmony for so many years could be cut off from each other again, that freedom of movement of people and goods could end. Should this be the case, our worry is that the more radical elements may return to violence. This is why our political group insisted on clear language in both the council’s guidelines and in the European Commission’s negotiating directives on the importance of finding a solution for the Border with Northern Ireland which we insist needs to be treated as one of the first priorities.

Ireland is not alone. It is an important part of a much wider European community and wants to remain so, as the opinion polls conducted after the UK referendum showed (86per cent of voters believing that Ireland should stay in – Irish Times/Ipsos MRBI poll, July 2016). While the UK has decided to continue its journey on its own, Ireland enjoys the support of the rest of our European family. And no decision on the Irish question will be taken without Irish agreement.

It is with the EU that the UK will be negotiating. There will be no bilateral deals. This is also what we have come to say in Wicklow. Another of our key priorities in the Brexit negotiations is the issue of EU citizens living in the United Kingdom. They must come first. Solutions must be found so that those living in the UK do not have their lives turned upside down because of a referendum result. Our third priority is the financial settlement. Great Britain has made commitments and has obligations. Those need to be settled before we discuss future arrangements.

The EPP Group’s position is clear: first we discuss the divorce settlement, then we talk about our future relationship. The European Parliament will not allow any parallel negotiations. We must come to terms with our common past before we can contemplate a friendly future.

Finally, we would add that a country outside the EU cannot have a better deal than an EU member state. Cherry-picking is over.

Brexit will cause damage to both sides, there is no doubt about it. Forty-four years of marriage, as reasoned and sometimes passionless it may have been, are not easy to wipe away in the blink of an eye. But we are convinced that the UK will come out of this more damaged than the EU.

Brexit will make the United Kingdom far less attractive and the UK economy will suffer from it. The UK will be very lonely on the edge of the Atlantic Ocean.

Yes, we deeply regret the outcome of the referendum which we feel was the consequence of an internal fight inside the Conservative Party. But we respect and accept it. Nobody is trying to stop the UK from leaving. Europe is a work in progress. We are a community of shared values in which alternative visions can coexist and sometimes clash, but by sharing a common table, we can work on a common destiny. The UK has excluded itself from this common story. We regret this but are hopeful that at least those who want to continue with a common Europe are successful.

By embracing Europe, Ireland made it a success story, while the UK has always stayed at arm’s length in an almost Victorian romance instead of a passionate relationship. According to the above-mentioned opinion poll, 65 per cent of Irish people believe the EU should be working closer together. We are grateful to Ireland for its enthusiasm for the European idea and we pledge to you that we in the EPP Group will not let you down.