Trump has not been alone in undermining American democracy 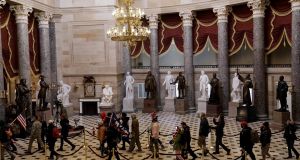 Supporters of President Donald Trump who swarmed the US Capitol walk through its National Statuary Hall in Washington.(Anna Moneymaker/The New York Times)

In an appalling yet fitting end to the presidency of Donald Trump, a pro-Trump mob stormed the US Capitol on Wednesday to prevent legislators from certifying the election of his rival, Joe Biden. The event was truly shocking. Yet if it surprised you, you haven’t been paying attention.

Trump has never hid his contempt for democracy. For two months, he has refused to concede to Biden. He privately pressured the Georgia Secretary of State to “find” votes to overturn the election. He has publicly claimed, despite a total lack of evidence, that massive voter fraud prevented his re-election.

President Trump should be removed from office, as many are now advocating, but the problem is far deeper than him alone.Trump alone has not undermined democracy; the Republican Party has become democracy’s enemy. Many Republican leaders supported Trump’s baseless claims that the 2020 election was rigged; their disputing the election results on the Senate floor on Wednesday surely incited those protesting outside the Capitol. The sight of Republican lawmakers fleeing the pro-Trump mob that breached the barrier perfectly illustrated Frankenstein’s monster turning on his creator.

Republican leaders’ support of Trump has aided and abetted his assault on democracy throughout his presidency. Dissenting party leaders such as Senator Mitt Romney who have consistently criticised Trump are few and far between. Yes, it’s a good thing that many Republicans are finally breaking with Trump. But praising them for now defending the legitimacy of Biden’s election is a bit like praising a serial killer for not murdering anyone this time.

It is not just Republicans’ defence of Trump that their party an opponent of democracy. Before Trump’s rise and especially after 2013 when the conservative-led Supreme Court gutted the 1965 Voting Rights Act, the party promulgated false claims of massive voter fraud as an excuse to suppress voting by racial minorities and the working class, likely Democratic voters. They shamelessly gerrymandered legislative districts in 2010 to dilute the power of Democratic votes. And now many of them had the gall to claim that it’s the Democrats who rig elections!

Republicans have not only gamed elections to undermine democracy. They have also exploited the most undemocratic features of the American constitutional system to frustrate the will of the majority. Republican Senate majority leader Mitch McConnell is now being praised for defending the legitimacy of the presidential election, yet he has done as much as anyone to undermine American democracy.

Just last week, McConnell prevented a vote in the U.S. Senate to increase Covid support to Americans that surely would have passed if brought to a floor vote. In 2016 McConnell prevented Obama from naming a Supreme Court justice several months before the election under the pretence that the next President should have that power. Then, hypocritically, weeks before the 2020 election, he rushed through the confirmation of ultraconservative Justice Amy Coney Barrett. The main difference between McConnell and Trump is that the former’s assault on democracy was waged in the backroom chambers of the Senate rather than on Twitter.

The only answer to this dangerous assault on American democracy is more democracy. And here there is hope. Wednesday also saw the election of two Democrats in the once solidly Republican state of Georgia in what may be the most consequential Senate election in American history. Their election gives Democrats control of both houses of the legislature and the presidency. As such, they will now have the power to fully investigate Republican attacks on democracy beginning with how Republican leaders incited Wednesday’s riot. More important, it gives them the ability to pass strong voting rights legislation to overturn Republican restrictions.

The election of Democrats in Georgia was partly an unintended consequence of Trumpist claims that the 2020 election was rigged. It turns out that if you keep banging on about how the elections are fixed, a certain number of idiots actually believe you and don’t vote. And that can cost you a close election.

But the election of two Democrats also resulted from a long-term organising campaign that particularly targeted African Americans, a reliable Democratic constituency with a long history of being disenfranchised. Recent elections in Georgia have pit this organizing effort against blatant efforts to repress African American votes, in many cases forcing black voters wait several hours in line to cast their ballots.

While Republican state officials are now being praised as defenders of democracy because they resisted Trump’s entreaty to “find” enough ballots to overturn Biden’s narrow win in the state, let’s remember they led these voter suppression efforts. The real defenders of democracy are those who fought long and hard to ensure that every Georgian had the right and ability to vote and those who endured long queues to cast their ballots.

Trump’s presidency carries many cautionary tales about American democracy’s fragility, painfully evident in the violence at the US Capitol. The riot and shocking events were a consequence of Republicans’ undermining American democracy, not just Trump’s. There is also a more positive lesson: when democracy is fully mobilised, its enemies cannot win.