If you think global warming is distant and remote, look at how Africa is changing 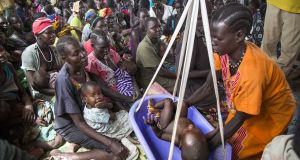 Expect to see far more of that polar bear marooned on a shrinking ice floe. With Donald Trump’s disgraceful decision to withdraw the United States from the Paris climate accord, global attention turns to an issue so large and consequential that we struggle to process it within the frame of conventional public debate. Politicians think in electoral cycles, not generations. The media are strong on events but weak on long-term processes. Faced with an invisible, still largely intangible threat to the lives of hundreds of millions of people and the habitability of the planet – even one that we can do something about – the instinct is to turn away and seek solace in ignorance.

Emblematic of the problem is that ubiquitous stock image of the polar bear, which captures the catastrophic dimensions of the threat but, by situating the story in a far-off wilderness, inadvertently reinforces two comforting myths about global warming: that the problem is distant and remote.

In these places, which are among the world’s poorest, global warming is not an abstraction but a lived reality

It’s neither. A better image would be that of a farmer in Niger who is struggling to feed her family due to drought and failing crops. Or a fisherman on the Pacific island of Kiribati, just 2m above sea level, where the ocean has already swallowed chunks of the coastline and could ultimately claim the entire island. In these places, which are among the world’s poorest, global warming is not an abstraction but a lived reality. Every day, they see how a changing climate can interact with other phenomena to disastrous effect.

At the heart of the climate crisis is one of the great inequalities of our age: while greenhouse gas emissions are disproportionately generated by the richest countries in the world, it’s the poorest on the planet who will be hit first and hit hardest. Africa, which produces just 4 per cent of the world’s emissions, is on the front line. The continent is expected to warm up to 1½ times faster than the global average, according to the UN’s Intergovernmental Panel on Climate Change (IPCC). That would leave it particularly vulnerable to the consequences – erratic precipitation, rising seas and extreme events such as droughts and floods. As it happens, due to poverty rates, poor infrastructure, its farmers’ dependence on rainfall and the lack of social-welfare safety nets, Africa is also the continent least equipped to deal with that fallout. The IPCC estimates that by 2020, up to 250 million Africans are likely to suffer from food insecurity as a result of climate-driven crop failure, loss of livestock and a lack of water.

Bad for your health

But those are only the potential direct effects. A warming planet is demonstrably bad for people’s health. The World Health Organisation estimates that, since the 1970s, climate change has been responsible for more than 140,000 deaths worldwide each year because it poses not only immediate dangers through heatwaves, floods and storms. Scientists expect to see more food shortages, increased malnutrition and more outbreaks of waterborne diseases such as cholera, which thrives in rainy periods. An open question is whether it could also impact on vector-borne diseases such as malaria. Some suggest warmer temperatures could affect the life cycle of mosquitoes in ways that would facilitate the spreading of disease.

Across Africa, climate migration is already driving the continent’s urbanisation. When drinking water becomes scarce or crops fail, people move. Huge numbers of Eritreans and Somalis have fled to Ethiopia in the past year due to food insecurity in their own countries. Climate change is expected to further increase the number of Africans living in slums and to worsen existing stresses in the continent’s fast-growing cities.

Less predictable, but a source of acute concern nonetheless, is the link between shifting weather patterns and security. We know that conflict over natural resources can spill into violence and war. Climate change is often thought of as a “threat multiplier” rather than a catalyst for conflict, but in 2009 the UN Environment Programme saw fit to observe that “the potential consequences of climate change for water availability, food security, prevalence of disease, coastal boundaries and population distribution may aggravate existing tensions and generate new conflicts.”

As part of the Paris climate deal in 2015, rich states reiterated a pledge to provide $100 billion a year until 2025 for developing countries’ own actions on climate change adaptation and mitigation. Many African counties, including Ethiopia, Rwanda and Kenya, have already developed climate-resilient strategies to cut poverty and emissions.

But given that African emissions are so low, a key part of the grand bargain was that the rich world would lead the way in fixing a problem that is largely of its own making. It was, as Donald Trump might put it, the ultimate deal. His decision to tear up that deal was wrong-headed and damaging to American interests. It was also a two-fingered salute to the poorest of the world.