Travellers should be prioritised for Covid-19 vaccination 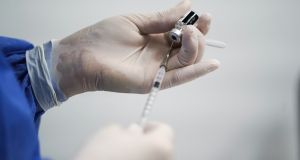 Are we here in Ireland being too narrow, too blinkered, too selfish in our unseemly rush to vaccinate those who don’t really need it but can afford it? Photograph: Nathalia Angarita/Bloomberg

The video of a Traveller funeral had been shared on Twitter a few thousand times by the time I saw it. It showed several hundred people following a coffin into a graveyard in Roscommon, during Level 3 restrictions. It was a spectacular breach of the limit of 25 people.

Like a lot of people, my reaction to the video was probably a slightly less polite version of “tut-tut, what part of global pandemic do these people not understand?”

That fed into the ‘outsider, outcast’ narrative of Travellers. It goes along the lines that these are the people who reject the rules of society, ergo society should reject them. Some of this translated into the 342,000 votes Peter Casey got in the presidential elections in 2018. In truth, there are few in society without an iota of prejudice against Travellers. I can see it in myself sometimes; daubing the brush into the barrel of tar when there’s a report on violent feuds between families.

I’m not for one second going to defend hundreds attending a funeral. Traveller representative groups have themselves harshly criticised them, saying they contributed to clusters in the community.

But I do challenge the way that when it comes to Travellers and Covid, public discourse is being shaped mostly by videos of funerals. That is a pity and unjust. These are outliers. The truth of the matter is that Travellers have been heroic in the way they have confronted a pandemic that has hit their community like a juggernaut.

The third wave has been devastating for this small but distinct group of people in our society. Since mid-December alone, some 2,000 Travellers have been diagnosed with the virus. The total since March last year is now running at 3,500. The maths are stark. That’s over 10 per cent of the 31,000 travellers recorded in the last census. It’s also two-and-a-half times the national figure.

This third wave, driven by the arrival of the UK variant, has been particularly merciless for Travellers – of the 89 outbreaks since mid-December, 15 have been clusters of 20 people or more. The median age has been 25.

Sure, funerals have played a part. But they have not been the predominant cause. In Ireland, most Travellers live in hopelessly overcrowded conditions, sometimes without adequate clean water or proper toilets. As a group they also have a much higher susceptibility to chronic health conditions.

Are we here in Ireland being too selfish in our rush to vaccinate those who don’t really need it but can afford it?

In Dublin, there are 500 Travellers in homeless emergency accommodation. That’s 11 per cent of Dublin’s homeless drawn from a group that makes up 1 per cent of the population.

There’s no other way of saying it – Travellers have been dealt a poor hand. Ronnie Fay, director of Pavee Point, this week instanced the situation faced by Traveller children out of school because of Covid-19. There are many who live in cramped trailers with no access to broadband or the screens and laptops that come as standard for most Irish children these days.

Education is the key to a better future for Travellers. We seldom hear of the Travellers who have qualified as medical doctors or nurses (mainly through the Royal College of Surgeons access programme), teachers, lawyers or academics (Sindy Joyce from Limerick was conferred with a PhD in 2019). There is a Traveller senator, Eileen Flynn, and a TD with Traveller heritage, Pádraig Mac Lochlainn. You can only imagine the almost insuperable odds they have overcome to become role models.

It took the pandemic for the Traveller health strategy to finally kick into action. And for local authorities to depart from the sclerosis that characterised its Traveller accommodation policies for the past half-century. To be fair to them, local authorities, the HSE and the Department of Health all stepped up in the past year to provide new accommodation, toilets, clean water, empty fields, mass and emergency testing, primary care, information. It’s thanks too to the commitment of many Traveller front-line health workers and organisations. Without their efforts, Covid-19 would have been even more devastating.

A truly shocking finding from the 2016 census was that only 3 per cent of Travellers are over 65, compared to over 12 per cent nationally. It is partly offset by the fact there are twice as many Traveller children under 12 than there are in the settled community.

It is still an arresting statistic. Life expectancy that low was last experienced in Ireland in the 1940s. “To be an old Traveller means that you’re only over 40,” Dublin Traveller Missie Collins has said. “Where I live there are 300 Traveller families. I can count a fist of them that are over 60. My own husband died in his early 50s. There are many Travellers who don’t get to see their 50th birthday.”

The undeniable reality is Travellers are a deeply vulnerable group in Irish society and should be prioritised for vaccination because they are more susceptible to the virus, and more likely to become very ill when they do get it.

Their example brings us to the wider question of vaccine equity, powerfully enunciated by Dr Mike Ryan when receiving Trócaire’s Romero award this week. “Who gets the vaccine?” was the (almost rhetorical) question he asked.

His answer laid down the battle lines for a profound moral choice: “If frontline health workers and vulnerable people in developing countries do not get vaccinated while the rich north gets on with vaccinating perfectly healthy young people, then I hope the history books write it down,” he said.