Dublin and Berlin bound by new spirit of energetic goodwill 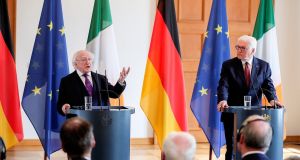 President Michael D Higgins’s 2019 state visit to Germany was such a success that his German counterpart (and Rory Gallagher fan) Frank Walter Steinmeier, right, was all set to return the visit last year – warp speed in diplomatic terms – until the virus intervened. Photograph: Maxwell’s

Dublin’s bilateral relationships with London and Berlin are like two very different children. London is the eldest: used to getting its way and able to throw world-class tantrums if not. Berlin is far younger and less petulant, so low-maintenance that it is easy to overlook – even neglect.

Now, just eight weeks into the post-Brexit era, Ireland is quietly rewiring its diplomatic priorities for the years ahead.

Maintaining close ties with the UK will remain existential. As Queen Elizabeth put it a decade ago in Dublin Castle – when Brexit was not yet a word, much less a reality – “whatever life throws at us, our individual responses will be all the stronger for working together and sharing the load”.

But as Dublin and London adapt the bilateral relationship to the post-Brexit reality, there will inevitably be distance on matters no longer of common – EU – interest to both capitals.

Enter Berlin. Twice in the last week, leading German and Irish officials have come together to discuss how to make more of their bilateral relationship.

The process started with a 2018 Department of Foreign Affairs plan for a “wider, deeper” footprint with its largest EU partner. Part aspirational thinking, part to-do list, much has been achieved in the three years since, from a new consulate in Frankfurt to a full-time cultural officer in an expanded embassy in Berlin.

Germany is no slouch either, from millions invested in its Dublin cultural hub, the Goethe Institute, to the unprecedented energy of ambassador, Deike Potzel.

President Michael D Higgins’s 2019 state visit to Germany was such a success that his German counterpart (and Rory Gallagher fan) Frank Walter Steinmeier was all set to return the visit last year – warp speed in diplomatic terms – until the virus intervened.

Not even a once-in-a-century pandemic has slowed progress in growing the Dublin-Berlin connection. In December, Minister for Foreign Affairs Simon Coveney was in Berlin to meet his German counterpart Heiko Maas.

As a departing, non-permanent UN security council member, Germany passed its baton – in fact a gavel – to Ireland. It was an outward sign of mutual trust after close work in New York, such as on security questions posed by climate change.

The German-Irish relationship stepped up another gear last week with a second video conference of state secretaries and secretaries general of foreign affairs, finance, agriculture, trade and defence.

Long-time watchers of this bilateral relationship in Ireland are hopeful, but have seen hopes dashed before

Ministers Coveney and Maas also published a new, 11-page joint plan of action. Its aim: to activate “unused potential” in the relationship of two pro-EU nations with a shared rules-based approach to human rights, climate change and all the many challenges in between.

Greater co-operation is promised in the Sahel region of Africa and on EU peacekeeping while the paper pushes research projects – from fintech and timber to cloud computing and livestock – to grow further bilateral trade ties already worth a healthy €42 billion annually.

A new spirit of energetic goodwill was palpable in a webinar on Thursday, organised by Prof Gisela Holfter of University of Limerick’s Centre for Irish-German Studies.

State secretary Miguel Berger of Germany’s foreign ministry said post-Brexit shifts in trade and transport were already visible, as consumers and producers in Germany and Ireland focus more on their respective markets.

His Irish opposite number, Niall Burgess, secretary general at the Department of Foreign Affairs, praised the “solidarity and care” shown to Ireland by Berlin in the face of recent Brexit challenges. As a student he secured a German scholarship from the country’s DAAD exchange programme, allowing him a year at the University of Würzburg, in Bavaria’s Franconia region. Closer personal relationships between Irish and Germans, he said, would leave both sides “much richer”.

New initiatives on the horizon include a “21st century penpals” project between six schools on each side, and a travelling guest professorship in Irish Studies, funded by Dublin, at Germany’s University of Wuppertal.

Long-time watchers of this bilateral relationship in Ireland are hopeful, but have seen hopes dashed before. For them, the true sign of a new, sustainable bilateral relationship will come when Dublin turns words into action on language teaching in schools, and transforms sporadic spending on research and cultural co-operation with Germany into a permanent part of the annual budget.

Officials in Dublin and Berlin say regular bilateral consultations will continue and move down through departmental hierarchies. Making it routine for civil servants, and not just diplomats, to know their German counterparts will, so they hope, sustain the the bilateral relationship beyond any political changes after September’s federal election.

You know the times are changing when, as one seasoned Irish official noted this week, Dublin’s contacts with Berlin have now reached a level of intensity previously reserved for London.