Tom Brady and the vindication of age over youth 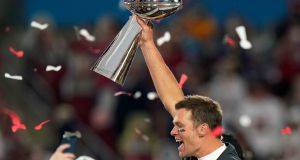 In the first half of Sunday’s Super Bowl a frothing 43-year-old Tom Brady chased down an opposing player, 28-year-old Tyrann Mathieu, and barked something so unpleasant into his face mask that it appeared to stun the younger man, nicknamed Honey Badger.

For an instant, Brady ceased to be the quarterback of the Tampa Bay Buccaneers vying for an unheard-of seventh Super Bowl victory and became something more familiar to me: a deranged old man angrily chasing a kid off his lawn.

Brady’s triumph on Sunday over the Kansas City Chiefs and their supremely talented 25-year-old quarterback, Patrick Mahomes, was the ultimate vindication of age over youth. Throughout the evening, the younger man raced around the field, frantically trying to make something happen. To no avail. Brady, meanwhile, was - but for his eruption at the Honey Badger - almost annoyingly composed. He prevailed not through any great flourish of athleticism but by making sound decisions and avoiding mistakes. It was a vintage, old man performance that this old man could appreciate.

Professional American football is a violent game played (mostly) by young men in hopes of creating a spectacle that might, for a few hours, distract older men from certain realities. Among them: that we have reached the age when our employers would happily swap us for younger, more tech-savvy and less expensive models. The spell is broken by the accompanying television advertisements for erectile dysfunction pills and balms for a clunky prostate.

We live in a culture that fetishises youth. Real estate developers and urbanists talk breathlessly about the latest amenities new buildings require to woo talented young workers. To someone my age - that is, I regularly awake to pee at 3am - it is astounding that an employer would care what I thought about our office space.

Still, it turns out that the old have not been vanquished. Our new president, Joe Biden, is 78 and moves like it. The speaker of the House, Nancy Pelosi, is 80. And the Senate minority leader, Mitch McConnell, is a 4,000-year-old vampire, or so I’m told.

In Hollywood, many of the acting nominees for this year’s Golden Globe Awards are well over 60, including Anthony Hopkins, Glenn Close, Bill Murray and Michelle Pfeiffer. In this digital age, many finance eminences are literally older than dirt.

In sports, where turning 30 once meant entering the death zone, longevity is the new frontier of greatness. There is talk that LeBron James, the 36-year-old basketball genius, is planning to play at least until his son enters the league alongside him.

As a Bostonian, I first encountered Brady when he was an unheralded young quarterback thrust into service when the man ahead of him was injured. I and a few other Patriots fans in New York would gather at a friend’s one-bedroom apartment to watch the games. We were all single then. We have since been through marriages and divorces, brought children into the world and watched them grow to adolescence, changed jobs, moved overseas and returned home - all during Brady’s career. It would not shock me if he is still tossing footballs when my post-gender grandchildren are living in a Tesla compound on Mars.

Brady credits something he calls “pliability” for his longevity. It is, to be charitable, a wellness regimen he has developed with his witch doctor/body coach/business partner that has not yet been scientifically verified. (My sister is a physical therapist. If you want to hear someone rant for two hours about “pliability”, do call her). Others suggest his success is down to the genetics lottery, or the quick decision-making that has allowed him to release the ball before taking a battering from very large men.

Whatever the case, Brady’s longtime employer, the New England Patriots, decided after last season that it was, at last, time to move on from the old man. So he did what other Northeasterners of a certain age do: moved to Florida.

One day, surely, it must come to an end. But not on Sunday, I realised, as I watched Brady accost the young Honey Badger. Then I had to pee.

Joshua Chaffin in New York Correspondent of the Financial Times