‘The Pogues’ Fairytale is now 30 years old. And on Christmas Day, the son of Tipperary who wrote it will be twice that age’ 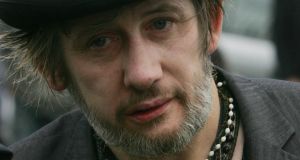 I had forgotten the singer Dan Fogelberg was no longer with us until noticing that today is the 10th anniversary of his premature death. But on a happier note, the milestone reminds me that he wrote one of the classic examples of a musical genre much appreciated at this time of year: the lyrically-depressing Christmas song that nevertheless feels good.

First released in 1981, but played every December since, Same Old Lang Syne describes him meeting an old girlfriend in a grocery store on Christmas Eve and, in the absence of a bar nearby, sharing a six-pack with her in a car while they discuss what might have been.

And if their mutual lament for lost innocence rings true, it may be because the story was autobiographical, based on Fogelberg’s real-life encounter with a real-life lost love a few Christmases earlier.

This made for an awkward situation when the record came out, given that it mentioned how the female party had married for security rather than romance: “She would have liked to say she loved the man/But she didn’t want to lie.”   In the event, her anonymity was preserved then and until after Fogelberg’s death when, safely divorced, she outed herself.

In any case, the gloomy lyrics are uplifted by the melody, which borrowed from musical greatness.  No, not Old Lang Syne, although that too was incorporated and made to sound better than the God-awful dirge it is.  I mean Tchaikovsky’s 1812 Overture, whose air is relocated from the Napoleonic wars to Peoria, Illinois, with haunting effect.

Russian composers are heavily implicated in the genre of simultaneously depressing and uplifting Christmas songs, because Sergei Prokofiev provides crucial support for another: Greg Lake’s I Believe in Father Christmas.

That too is about lost innocence.  And it was sung with feeling in our house earlier this week as my children watched the weather forecast, outraged that the worst was passing Dublin by: “They said there’d be snow this Christmas/They said there’d be peace on earth/But instead it just kept on raining/A veil of tears for the Virgin birth.”

Which in turn reminds me of another masterpiece of Yuletide gloom: Joni Mitchell’s River.  It actually starts with Jingle Bells, on piano, but played in a minor key, as if it’s four in the morning after a party when all the guests have gone, including her now estranged lover.

Sure enough, that’s what the song is about, although as with Greg Lake’s, it also works as a lament for unseasonably mild weather, even climate change. A Canadian in California, Mitchell dreams of a frozen river she could “skate away” on.  But I’m sure the song is sung with equal fervour in Friesland, where the Elfstendentocht – a famous canal skating marathon – has not been held since 1997, the last time it was cold enough.

Christmas Card from a Hooker in Minneapolis

Then the facade disintegrates as she reveals that, in reality, there’s no husband and, worse, “he doesn’t play the trombone”.  Yet even this ends on a faintly optimistic note, with a PS to the effect that she’ll be “eligible for parole on Valentine’s Day”.

The incarceration at Christmas theme brings us, inevitably, to the “drunk tank” in Fairytale of New York: greatest of all the paradoxically-uplifting songs of seasonal misery. Its lyrics are marinated in alcohol and regret.  But again, somehow, the music soars.

Speaking of regrets, one of mine this year is that I didn’t get to see a play called Fairytale Off New York, which premiered in Borrisokane, Co Tipperary, recently and ran for four nights.  Written by Michael Doorley, it was inspired by both the song and a strange real-life incident in a Dublin restaurant some years ago.  I hope there’ll be a second run.

In the meantime, the premiere coincided with two anniversaries.  The Pogues’ Fairytale is now 30 years old.  And on Christmas Day, the son of Tipperary who wrote it will be twice that age.

This is no small achievement.  Shane McGowan was famously hard-living when the song came out.  If bookies had given odds on him reaching 60 then, he’d have got more than 18 to 1.