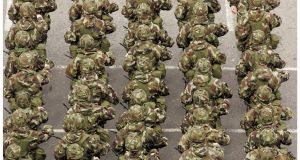 Members of the Army and Defence Forces marching along O’Connell Street: there has been little public debate on Pesco. Photograph: Alan Betson

A major decision about Ireland’s role in a common European defence has been rushed through the Dáil.

On Thursday, 7th December, the national parliament voted to enter a new military arrangement known as Permanent Structured Co-operation (Pesco). The Cabinet took a decision to propose this at their meeting on November 21st but deliberately withheld notification until the very last moment. One can only conclude that the aim was to limit the space for public debate.

There is no requirement under EU treaties for Ireland to enter a new military arrangement. Article 46 of the Lisbon Treaty allowed countries who wanted to deepen their military commitment to the EU to join on a voluntary basis in “permanent structured co-operation”. It was originally thought that neutral countries such as Ireland would not take this step.

Yet Fine Gael has a long-term strategy to erode the concept of Irish neutrality and pave the way for greater involvement in a new EU army.

The call for an EU army was originally made by the EU Commission president Jean Claude Juncker on March 8th, 2015. He said that “a common European army would convey a clear message to Russia that we are serious about defending our European values”.

Two years later, moves were put in place to create Pesco. The notification to the EU Council on the formation of Pesco stated its purpose is bring together all willing member states whose “military capabilities fulfil higher criteria” and which have made “more binding commitments with a view to the most demanding missions” .

As if that was not explicit enough, the notification further stated that “A long-term vision of Pesco could be to arrive at a coherent full spectrum force package – in complementarity with Nato, which will continue to be the cornerstone of collective defence for its members”.

But where have the Irish people ever expressed a readiness to send their troops to fight wars in the Balkans, in “complementarity with Nato”?

Does the redefinition of Irish neutrality now include an option to join in mad-cap adventures triggered by erratic US foreign policy under Donald Trump?

Pesco is ominous because it is based on binding legal commitments between participating EU states. Annual regular assessments will be conducted by the High Representative of the Union for Foreign Affairs and Security Policy to ensure that Ireland is honouring these commitments.

Just as the troika was allowed to monitor Ireland’s economic policy in the past, we now have another EU agency monitoring defence commitments.

But what are these commitments that Fine Gael and Fianna Fáil have signed us up to?

One is “regularly increasing defence budget in real terms, in order to reach agreed objectives”.

But should we not be prioritising spending on social housing rather than defence? Homeless people are dying on our streets while others are living in cramped, overcrowded conditions with relatives of friends. Do homes not come before bombs and guns?

And what are these “agreed objectives” and who will be agreeing? Nato members are proposing that the target for military budgets should be 2 per cent of gross domestic product. If Ireland were ever to try to reach this, we would require a fivefold increase in military spending.

Another commitment is to spend 20 per cent of our total defence budget on military equipment and research to “fill strategic gaps” in EU defence.

Pesco also signs us up to “Intensive involvement of a future European Defence Fund”. The purpose is to develop an EU arms industry so that profits can be made by companies who manufacture the means of death and destruction. Like those who are currently supplying Saudi Arabia with the means to massacre people in Yemen.

Instead of more weapons, the EU should be investing in a transition from a fossil fuel economy to one based on renewables. Or, shudder the thought, using the money to alleviate world hunger and care for refugees its past military interventions has produced.

Henceforth, however, Irish soldiers will be joining these EU military actions. Under Pesco we are agreeing to “partaking in European external action in the military field” and “substantially contributing to EU battle groups by confirmation of contributions in principle at least four years in advance”.

When Irish soldiers start dying in foreign fields to protect the interest of the big European powers, these clauses will come back to haunt the conservative parties.

But in the meantime, consider this. Article 29 (4) (9) of the Constitution: “The State shall not adopt a decision taken by the European Council to establish a common defence pursuant to article 42 of the Treaty on European Union where that common defence would include the State.”

Why then is the Taoiseach and his allies in Fianna Fáil signing us up to such a common defence?