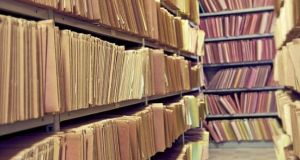 Just what constitutes a public as opposed to a private record in relation to our history of institutionalisation? Photograph: Getty Images

Over many years the declaration that we “must learn the lessons of history” has abounded. We do no such thing; indeed, the constant iteration of this rallying call is precisely because we do not absorb the lessons. Neither is learning those lessons the real reason we study history.

Forty years ago Leszek Kolokowski, a Polish philosopher, offered an alternative and succinct reason: “We learn history not in order to know how to behave or how to succeed, but to know who we are.”

That is relevant to both the national and the personal perspective. One of the most emotive issues in our recent history has been the inability of people to know who they are as a result of lost childhoods, institutionalisation and forced separation. That is why the issue of the mother and baby home records has become such a touchstone.

The notion of a new denial compounding a historic betrayal understandably infuriated those whose lives were enveloped or even destroyed by these institutions.

The clarification on Wednesday from the Attorney General that these survivors can request information from the archive of the Mother and Baby Homes Commission is welcome.

It is unacceptable and unjust that any individual be denied access to their personal records as that would essentially be a denial of their citizenship, and that victims of these institutions have been distressed by recent developments is unacceptable.

But, as Minister for Children Roderic O’Gorman has pointed out, a myriad of other issues remain unresolved: we need elaboration on them and the wider question of access to archival material.

In 1995 the journal of the Irish Society for Archives editorialised about some of the potential problems in relation to this issue. “Because the preservation of archives is increasingly becoming guaranteed under statute, and because of greater public awareness of their value . . . the emphasis will change from preservation to access. In such a situation there is potential for conflict between the demands of researchers for access and those of the professional archivist in relation to the moral and physical protection of archives.”

The archivists further suggested that forums were needed to contribute to a better mutual understanding. Such a forum is needed now as a matter of urgency, but we also need to look at what we already have.

Since 1987 there has been a National Archives Advisory Council, established under the National Archives Act of 1986, to advise the minister with responsibility for archives (now Catherine Martin) not just on the exercise of her powers under the 1986 Act, but “on all matters affecting archives and their use by the public”.

Consisting of historians, archivists and chaired by a judge (the current chair is Justice John Hedigan, a retired judge of the Court of Appeal), the advisory council has virtually no public profile but it should have given the issues that have continually arisen, not just in relation to the mother and baby homes but also the archives generated by the Ryan Commission into child abuse and the report of the interdepartmental committee on State involvement with the Magdalene laundries.

It is both disturbing and astonishing that the records of the Ryan Commission were at one stage being threatened with destruction.

The report of the Mother and Baby Homes Commission, due to be delivered today but unlikely to be published for months, is said to be 4,000 pages. It will deserve careful and thorough consideration, but it is unlikely it will bring complete satisfaction or closure to all concerned.

The tension between the officially-documented version of events in institutions and the experiences of those who lived or were born in them will probably never be fully resolved.

What is needed now seems sevenfold: that those who gave testimony to the commission be provided with a copy of their own testimony; a guarantee that individuals, including those adopted from the homes, get access to their full personal identity records and not just a database; the honouring of the rights of those who want their testimony and records relating to them to remain confidential; that material that should be open anyway due to it being older than 30 years be released; full information about the extent, location and accessibility of the records the commission’s report is based on; and that along with those affected by the institutions, professional archivists be vocal and included in the process of resolving these dilemmas (a statement from the National Archives would help).

Finally, there is the question of whether documents considered as belonging to a private entity – in this case religious orders running the homes – should actually be classed as State archives given the role of the State in funding and inspecting the institutions. Just what constitutes a public as opposed to a private record in relation to our history of institutionalisation?

Archives and their preservation and use raise key questions of public ownership and collective citizenship.