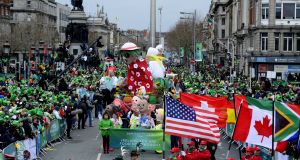 St Patrick’s Day, Dublin. ‘Absolute symbolic equality between all religions would rule out maintaining the flags of countries such as Sweden and the UK, which feature crosses, or having Christmas, Easter or St Patrick’s Day as national holidays.’ File photograph: Cyril Byrne

The news that the more than 200 secondary schools run by the State Education and Training Boards are to phase out specifically Catholic symbols and practices was unsurprising. These schools are formally multidenominational so mandatory Masses, Catholic symbols and visits by diocesan inspectors have come to be seen as increasingly inappropriate in a country whose population includes rapidly rising numbers of non-Catholics and, indeed, non-religious people.

However, while mandatory Masses and diocesan inspections are clearly unsustainable in contemporary Ireland, working out what symbols and arrangements should stay or go is likely to be a difficult task.

The General Secretary of Education and Training Boards Ireland has stated that the overall goal is “catering for children of all religious and non-religious worldviews equally”. The problem is that given the fuzzy border between religion and culture, achieving absolute equality between all religions is extraordinarily difficult.

Christianity has been one of the biggest, perhaps the biggest, influence on Irish and European culture over the centuries. To be sure, there have been other influences. A strong secular tradition has made European societies some of the least religiously influenced in the world.

There have also been long-standing Jewish and Muslim presences in parts of Europe and recent decades have seen a large increase in the Muslim population as well as rises in the numbers of other religions and non-believers.

However, in most European states for almost all of the past millennium the vast majority of the population has been Christian. The influence of this religious tradition on national cultures is hard to overstate. European art and music cannot be understood without an understanding of the Christian story.

In Ireland the Christian influence over Irish culture is difficult to avoid from basic greetings such as “Dia is Muire dhuit” to the status of St Patrick’s Day as national holiday. As a range of scholars of church-state relations have pointed out over the years, in circumstances where one particular faith has exercised a predominant influence over centuries, achieving absolute symbolic equality for all religions is almost impossible.

Absolute symbolic equality between all religions would rule out maintaining the flags of countries such as Sweden and the UK, which feature crosses, or having Christmas, Easter or St Patrick’s Day as national holidays. The use of the shamrock on the jerseys of Irish sports teams would also fall foul of a strict neutrality rule given the history of the shamrock as a symbol of the Christian Holy Trinity.

As Benedict Anderson, the famous theorist of nationalism, wrote, nations are “imagined communities” that require shared stories and symbols to sustain them. It is unavoidable that those stories and symbols if they have any historical resonance, will reflect the religiously-particular history of that nation.

In some cases, this might be straightforward. The shamrock as a symbol of Ireland has probably achieved a meaning separate from its religious origins just as the Swedish flag represents Sweden in a way that transcends the presence of a cross on the flag.

Other cases might be more difficult, Christmas has a dual role as a national celebration with many secularised elements as well as Christian religious feast. This means that it may be reasonable to give Christmas a more prominent role in the life of a secular Irish school than is given to Diwali, Eid or Yom Kippur.

St Patrick’s Day could be seen as an unacceptable celebration of the arrival of one particular religion to Ireland. But replacing it with a generic “Ireland Day” would surely be a loss and it could equally be seen as a cultural celebration of Irish identity more generally, albeit one with Christian roots

Human rights law does not require absolute neutrality on the part of the State. In the case of Lautsi v Italy the European Court of Human Rights ruled that religiously-specific symbols can appear in state schools provided that the system is open to all belief systems and the overall effect on pupils is not oppressive. The Irish authorities ought to be more ambitious and to aim for arrangements for religious minorities that are more inclusive than the rather low standard of “not oppressive”. But it should be recognised that this is no easy task.

The state should not be engaged in the promotion of one set of religious beliefs. However, Christianity has exercised too great an influence on Irish culture over the centuries for it to be possible to remove any arrangements or symbols that bear the imprint of that influence from schools or other state. Designing arrangements that are not exclusionary but which do not throw the cultural baby out with the religiously-specific bathwater will be a difficult and delicate task.