The world in 2019: a good year for the pessimists 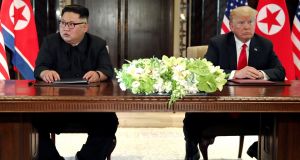 US president Donald Trump and North Korea’s leader Kim Jong-un hold a signing ceremony at the conclusion of their summit on the resort island of Sentosa, Singapore in June. Photograph: Jonathan Ernst/Reuters

In José Saramago’s novel Death at Intervals, built around the conceit that one day, suddenly, people stop dying, there’s a darkly comic scene in which a specially-formed expert commission convenes to try to figure out how to deal with the practical consequences of eternal life. “The philosophers, divided as always between frowning pessimists and smiling optimists, readied themselves to recommence for the thousandth time the ancient dispute over whether the glass was half-full or half-empty . . .”

Half-full or half-empty. When we consider the world in 2019, both camps – the frowning pessimists and the smiling optimists – have a cogent case to make. The latter, represented most prominently by the linguist Steven Pinker, stresses the long view. There has never been a better time to be alive, Pinker argues in his recent book Enlightenment Now. In a broad defence of scientific rationality and liberal humanism, he enumerates human advances in a range of areas – health, the environment, peace, democracy and so on – to conclude that we are healthier, wealthier and safer than at any point in human history. His previous book, The Better Angels of Our Nature, holds that war and violence are in long-term decline in the developed world.

We only think the world is getting worse because of the type of information we consume day-to-day, according to this argument. The news, Pinker observes, is filled with stories about war, death, terrorism, pollution, crime, drugs, guns, inequality, violence and oppression. Every problem is a crisis, every illness an epidemic, every rain shower a storm. The news consists only of what happened, not what hasn’t happened, so as long as bad things do not vanish entirely, there will always be enough bad news to fill a newspaper or a TV bulletin. That distorts our view.

Victims of false consciousness or not, most of us tend to see the world through our own generational frame. That means people feel they have good reason to be gloomy. Most western adults can compare the state of the world today with, say, the 1990s, an interlude between the end of the Cold War and 9/11, when western economies were roaring, liberal democracy seemed unassailable, politics was civil and stable, and climate change was barely talked about. Even though, since then, millions of people have been lifted out of poverty and hundreds of thousands of lives have been saved by advances in science, the west is, for its own reasons, wracked by existential angst. And 2019 is going to make that worse.

That’s because we can safely assume the short-term trajectory of some of the most worrisome trends in western politics. Brexit is due to take place on March 29th, and none of the possibilities still on the table is remotely palatable. A no-deal exit for the UK would be disastrous. A negotiated departure would be less traumatic but very damaging nonetheless. Even the best outcome for Ireland – a Remain vote in a second referendum – would poison British politics for years and probably result in yet another vote within a decade.

We enter 2019 with populists in power across the developed world

In the US, the departure of defence secretary Jim Mattis removes from the Trump administration the last serious, experienced multilateralist from the White House. A Democrat-controlled House of Representatives may constrain Trump domestically, but it will do little to temper his wildly erratic foreign policy. With Trump unshackled, expect further appeasement (with no reward) of North Korean dictator Kim Jong-un, worsening tensions with the EU and Nato and continued kowtowing to Moscow. That’s the most benign scenario.

In 2019, the world will pay the price for Trump’s reckless decision to withdraw US troops from Syria. The Kurds, abandoned by their US allies, will fear being massacred. Expect them to lose all the gains they have made in recent years as the Turkish military imposes itself in America’s absence. Islamic State (Isis) will regroup in different forms. There has been no terrorist attack resulting in more than 10 deaths in Europe since the summer of 2017. It would be a surprise if that trend did not go into reverse this year.

We enter 2019 with populists in power across the developed world. Democracy has not only stopped spreading; it is in retreat. Thirty years after the Tiananmen Square massacre, China’s model of authoritarian capitalism appears stronger than ever, and its leaders are growing more assertive on the world stage. From Brazil to Turkey, strongmen are on the rise. The global economy is fragile. China and the US are locked in a trade war. And rich-world leaders show no sign that they are prepared to do what is needed to avert catastrophic climate change.

In other words, for those who value the international order put in place in the postwar era and the liberal values that underpinned it, there is every reason in the world to feel alarmed about 2019.