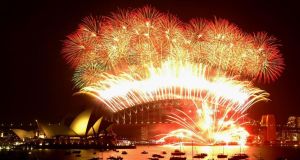 “Images of the Sydney Opera House practically exploding as Australia rings in the year sets the bar unrealistically high and any plans you may have been looking forward to seem parochial in comparison.” Photograph: Nick Wilson/Getty Images

It’s the most anxiety-inducing time of the year. New Year’s Eve is upon us again.

Even the question is enough to send shards of apprehension through me: “What are you doing for New Year’s?”

For me, it’s an annual race to be under the covers and asleep by midnight, as the rest of the world celebrates, and hope I’m not woken by fireworks. I dread this night of the year.

New Year’s Eve is supposed to be about joy, hope and starting over. But for me it’s an existential crisis in the form of forced fun; an overwhelming, stressful, travesty of a party where everyone is under pressure to pretend they’re having The Best Time Ever.

The reality versus the expectation is always going to be a downer. Early images of the Sydney Opera House practically exploding as Australia rings in the year sets the bar unrealistically high and any plans you may have been looking forward to seem parochial in comparison.

Unless Colin Farrell turns up in the local pub, and you get off with him – like my sister did once at the stroke of midnight – it’s guaranteed to be a disappointment.

We’re meant to see it as a time of reflection, of looking forward to new beginnings, but it only makes me maudlin about the past and forboding about the future.

I miss everyone I ever knew, and feel the cold spectre of doom. When the Charlie Hebdo shooting happened in January 2015, I thought of how those same 12 people had been full of optimism, celebrating Le Reveillon just a week previously.

Maybe I’m a control freak, but I wonder about the mindset of those who can stare at the future and laugh in its face

It’s enough to make you want to drink your head off, but what could be a more depressing start to a year than waking up on January 1st with the worst hangover of your entire life?

I look at others out of their minds with happiness on New Year’s Eve and think: who are these people? How can you wave goodbye to an old year so cavalierly and have no regard for it being gone forever? I get a heightened awareness of mortality and finality and the inexorable march of time.

Maybe I’m a control freak, but I wonder about the mindset of those who can stare at the future and laugh in its face. I can’t work out if they’re moronic or liberated, brave or stupid.

Auld Lang Syne is profoundly melancholic. The Robert Burns poem set to music means “days gone by” and is a farewell song. Should old acquaintance be forgot and never thought upon? The flames of love extinguished and fully past and gone.

It’ll be 10 years this year since I’ve gone out on New Year’s Eve. Instead I go to bed with my son and feel inordinately thankful for having him and wake up when it’s all over.

I gave up trying to celebrate it after a particularly flaccid night in 2008 where I drank cheap champagne and had to make small talk, in French. Life’s too short.

The time I’d faced it before that was in London when a rogue candle set my hair on fire. I’d even avoided partying like it was 1999 on the millennium eve, when me and my new boyfriend at the time both agreed there were better ways to ring it in.

Anyway, it’s a horrible time to be on a night out – hard to avoid, insanely busy, messy, and full of the kind of people that makes you think Sartre was right.

It’s also an excuse for every overly-affectionate drunk to slobber on everyone, and you’ve to kiss those around you at midnight, which gives me the same social anxiety as having to do that awkward handshake thing at Mass. Not to mention the cringey clock countdown itself.

Then it’s over. And everyone’s celebrating the new year now and they don’t care about the old one. It might as well have never happened.

Despite hating New Year’s Eve, I’ve always felt relieved and resolved on New Year’s Day. There’s a sense of acceptance about it. Paradoxically, I see change as an opportunity and not something to fear. So I’ve decided the focus should be on embracing January 1st, and all it brings.

It’s named after Janus, the god of gates, transitions, beginnings and endings. He’s usually depicted as having two faces and he looks to the future and the past. I’ll think of Alfred Lord Tennyson, who wrote: “Hope smiles from the threshold of the year to come, whispering: ‘It will be happier.’”

Larissa Nolan is a writer and commentator