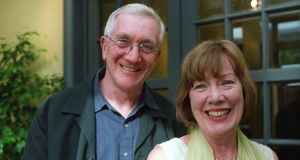 Since my father, Fergus Linehan, died last November we’ve been circling around his personal effects and papers without managing to figure out quite what to do with them. Hundreds of typewritten pages. Black-and-white glossies of forgotten shows. Posters for comedies, musicals and tragedies, hits and flops, world premieres, revived classics, new adaptations and hopeful revivals.

It’s the sort of ephemera which was never intended for posterity, but which now stands as a permanent record of a lifetime immersed in Irish theatre.

To absolutely no one’s surprise, for every photograph of my father, there are 50 of my mother, Rosaleen, which is as he would have wanted it

To absolutely no one’s surprise, for every photograph of my father, there are 50 of my mother, Rosaleen, which is as he would have wanted it.

Occasionally one of us will dive into the papers and emerge with a tasty morsel, like this 1968 letter.

“My dear Fergus Linehan,” it begins. “May I express my admiration for the skill and brilliant humour of your play, McRoarty TD. It is not a bit my sort of play, as you may realise – I belong, I fear to the Celtic Twilight period – but I cannot withhold the fact that I laughed nearly all the time, and loved all the jokes.

“I see that Seamus has been quite wicked to you, and you must be wicked to him. As you are to all our dear politicians.

“I feel certain that the play will be a great success. All you will have to live down is one bad notice.

“Hilton Edwards and I, who have had thousands of bad notices, have never recovered from the shock and send you brotherly greetings. My congratulations to your wife, who is irresistibly funny and good. Yours ever, Micheál Mac Liammóir.”

“Wicked” Seamus is Seamus Kelly, Irish Times theatre critic and author (as Quidnunc) of this Diary for 30 years.

The line about my mother shows how inextricably my father’s life as a writer was entwined with hers as a performer. Over the course of 60 years, they worked together on scripts and songs which ended up in satirical revues, radio shows and stage musicals. The clack-clack-clack of the typewriter from the study was a familiar childhood soundtrack for my brothers, sister and me.

When we started to grow up, my mother began to stretch her own wings to escape from her designated pigeonhole as a “mere comedienne”. From Friel and Murphy to Chekhov and Wilde, she became an internationally recognised dramatic actor, a source of immense pride for my father, who loved to see her succeed in London and New York as well as in Dublin.

There will be no more writing now, but the performing goes on. On Tuesday in the Gaiety, when Rosaleen Linehan emerges onstage as Hurdy-Gurdy Man in Conall Morrison’s Woyzeck in Winter, as part of the Dublin Theatre Festival, she will continue a tradition almost as long as the 60-year-old festival. It’s 56 years since she made her first festival appearance in Late at the Gate, a revue written mostly by my dad.

On October 12th, that six-decade-long relationship with the Dublin Theatre Festival will be celebrated at a dinner in the Westbury Hotel.

It will be an emotional night for the family as we approach the first anniversary of my father’s death.

If anything, our connections with the festival have grown deeper over the years through my brothers: Fergus jnr (as we no longer have to call him) spent five years as its director; Conor has composed music for many productions and is pianist on Woyzeck in Winter.

While his day job was as, variously, film critic, TV critic and arts editor for The Irish Times, and his most commercially successful writing was the satirical revues he wrote for my mother and Des Keogh from the 1970s onwards, my father’s true passion was for musical theatre.

Many of his most successful musicals were Dublin Theatre Festival productions: Speak of the Devil in 1980 (for which my mother wrote the music); Mary Makebelieve in 1982 and The Streets of Dublin in 1992.

For my mother, one of her first “straight” roles was as Arkadina in Thomas Kilroy’s version of The Seagull at the 1981 Dublin Theatre Festival. Her one-woman performance in Mother of All the Behans got rave reviews at the 1987 festival, and the following year her portrayal of Maela in Frank McGuinness’s Carthaginians won her a Harvey’s award (the equivalent of today’s Irish Times Irish Theatre Awards). There have been so many festival appearances since that she confesses she’s lost count.

Surprisingly to me, this is the first public celebration of an enduring partnership in life and love as well as in theatre.

I like to think that my father, after a lifetime spent in the wings, is finally walking onstage to take my mother’s hand as they both turn to the audience and accept their applause.