Gavin Sheridan: Will Facebook be a vector for hate in the Irish abortion referendum? 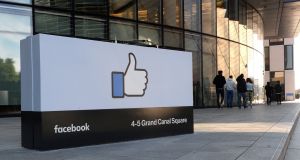 Facebook can no longer argue it’s too small to not fall within electoral laws. Two million Irish users spend significant amounts of time on Facebook every day. Photograph: Cyril Byrne

Most political anoraks will be familiar with the “I approve this message” included at the end of campaign ads in US elections. It usually comes at the end of whatever political ad is being broadcast. It is known as “stand by your ad” and is part of the McCain-Feingold legislation enacted in 2002.

The legislation has merit, but 2002 is a long time ago in internet years – the legislation was brought in before Facebook, Twitter, YouTube or Instagram existed. Transparency was one of the key aspects to the legislation.

Fast forward to 2011 and attorneys representing Facebook wrote to the Federal Election Commission (FEC) arguing that Facebook ads should remain exempt from most provisions of existing legislation.

In the letter – available on the FEC website – Facebook lawyers argued the FEC already recognise an exception for “skywriting, water towers, wearing apparel, or other means of displaying an advertisement of such a nature that the inclusion of a disclaimer would be impracticable”.

Facebook was effectively arguing that ads within its platform were exempt from rules because ads on its platform were more like skywriting than broadcasts on television. Facebook ads for electoral purposes were left largely unregulated.

But 2011 is also a long time ago in internet years and the world is a different place today. Revelations in the US of Russian interference in the 2016 election have prompted several investigations.

Last November, Facebook founder Mark Zuckerberg said, “I think the idea that fake news on Facebook – of which it’s a very small amount of the content – influenced the election in any way is a pretty crazy idea.”

On Wednesday, he wrote that he regretted that remark. Last week, Zuckerberg announced a number of initiatives to try and salvage Facebook’s reputation. Clearly he has already seen some or all of the 3,000 adverts that Facebook admits Russia purchased during the US election last year. You can see why he is moving to gain the initiative. They are toxic ads grounded in fear, racism and outward hostility.

But this is where things get worse for Facebook.

These 3,000 ads will likely be made public by any US politician who gets copies of them. Facebook has tried to prevent this happening by only showing but not making copies available – but they can’t hold out forever. And it’s highly likely more ads and more pages and more fake profiles will be found and exposed. They are, as one US politician said, “the tip of the iceberg”.

And as more is exposed, Facebook will face fundamental existential questions. Is Facebook a vector for hate? Is it a platform that warps people’s view of reality? Is it a platform that – partly down to light regulation – has allowed itself to be used by another country to explicitly seek to undermine a US presidential election and to also profit from that interference?

And a more pressing concern: how do we solve this for our own upcoming referendums?

Facebook can no longer argue that it’s too small to not fall within electoral laws. Two million Irish users spend significant amounts of time on Facebook on their phones and computers every day – far more than at any time in the past, and now rivalling or surpassing time spent watching television.

We must legislate to bring digital into line with other media, and transparency is the best place to start.

There are a number of possible ways to approach it – some of which Facebook have said they will implement voluntarily – such as: require anyone who wishes to post an ad in relation to any of the issues relating to the upcoming referendums to disclose who they are, within or beside the ad they have posted; require the details of who was targeted in each ad campaign to be published in real time; require every ad taken out in relation to the referendum issue to be published publicly – effectively banning the use of “dark” ads visible only to small targeted groups; and require that the total spend for each ad is disclosed, and that the source of the money is itself disclosed.

Similar legislation – including the storing of all ads in a centralised database accessible to anyone – has been proposed in the US recently and Congress is likely to seek passage before the 2018 mid-term elections.

If Facebook – a company with revenues of $3.3 billion a month – wants to operate in countries, it should see such regulation as part of the cost of doing business and also something it can no longer ignore.

And we would be wise to move quickly. The fabric of democracy is at risk.

Gavin Sheridan is a journalist and chief executive of Vizlega l