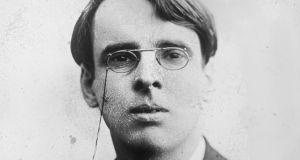 The possibility, indeed probability, that a precious hoard of materials closely associated with our greatest poet, WB Yeats, might now leave this island should be a matter of grave concern to all who cherish our cultural heritage.

The “Yeats Family Collection” is due for auction in London next week and once gone – assuming that is its fate – the treasures it includes may never be retrieved for the State and its people. In a country that valued the makers of its literary traditions, the retention of such valuables would be ensured. The “curious silence”, as historian Diarmaid Ferriter described it in this newspaper, around the disposal of these heirlooms is as alarming as the potential of their loss. It says much about 21st century attitudes to a man once canonised as a “national poet” and who, beyond the literary sphere, played a role in the shaping of post-independence Ireland.

The decision to put this collection into auction is of course a family matter, and the poet’s descendents have previously shown extraordinary generosity and consideration with donations to the National Library which, to its credit and with the assistance of State support, acquired the very significant Yeats-Joyce correspondence earlier this year.

However, the Government is implicated through its granting of an export licence. It is not that long since the issue of so readily allowing rich assets of cultural heritage to leave the jurisdiction arose in the context of the Beit paintings. Vigilance and tighter controls were advocated then and more forceful safeguards are still required.

Far too much of Ireland’s literary heritage has made its way into the archives of well-endowed American universities and the collections of private individuals abroad. It is time to stem the flow. Keeping the “Yeats Family Collection” as part of our national collection would be one answer to the call once made by his fellow Nobel laureate Seamus Heaney that we “recognise the immense contribution his work makes to our general intellectual and imaginative resource”.

1 Sinn Féin’s stand on Covid is facing increasing questions from political rivals
2 Coronavirus: Close contact numbers fall in sign restrictions may be working
3 What can we learn from ‘the best Covid county in Ireland’?
4 Seán O’Brien: Anger over my parents’ break-up has never left me
5 Love in a time of Covid: John and Mary marry over 40 years after first meeting
Real news has value SUBSCRIBE