The rise and fall of Pegida: how Islam-critical movement has changed German politics

‘Merkel’s remarks on Islam were seen as an unacceptable attempt to pawn the party’s last unique selling point: the “C” in its Christian Democratic Union’ 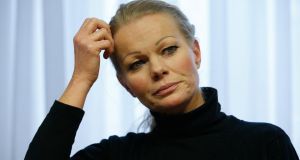 ‘Whether Pegida goes under or not is far less interesting than the effect it has had on German politics.’ Above, Kathrin Oertel, who resigned as leader of the German anti-Islamist movement Pegida days after the departure of her predecessor Lutz Bachmann. Photograph: REUTERS/Fabrizio Bensch

The grassroots Islam-critical movement appears to be imploding after a mass walkout of leading figures on Wednesday. But whether it goes under or not is far less interesting than the effect it has had on German politics.

In just three months it grew exponentially via Facebook, stripping away the politically-correct veneer of German public debate to reveal – and reactivate – the slumbering intolerance beneath.

For many it’s a worrying sign that populism is in, Islam is fair game and Germany’s race to the political bottom is on. A pertinent question posed by Pegida’s rise and possible fall is: who stands to benefit?

The nascent Alternative für Deutschland (AfD) in Saxony could offer a political home to the 25,000 people who marched through Dresden to express concern at the supposed “islamisation of the west”.

The AfD pulled in nearly 10 per cent at its first state election in Saxony last September by going beyond euro criticism to appeal to conservative voters’ worst instincts: warning of “criminal” foreigners and protesting against mosques.

After recent exploratory talks, it would be negligent of AfD leaders in Dresden not to offer disillusioned Pegida organisers and followers a new home in their camp.

An AfD bulked up with Pegida supporters, however, poses a risk to Saxony’s ruling Christian Democratic Union (CDU). Rather than sit on his hands, CDU leader and state governor Stanislaw Tillich is making a play of his own.

For weeks Angela Merkel’s CDU flailed around helplessly over Pegida, unsure of how, or whether, to respond to the upstart organisation.

In her televised new year address, channelling Yoda from Star Wars, Dr Merkel told her citizens to beware unnamed “people with hate in their hearts”.

On her second attempt, Dr Merkel challenged Pegida with a plea for tolerance and inclusiveness, telling the Bundestag that “Islam is a part of Germany”.

Instead of applauding, though, conservatives in her party sat in angry silence. At a heated party meeting days later in Bonn, senior Merkel allies openly contradicted their leader. Her remarks on Islam were seen as an unacceptable attempt to pawn the party’s last unique selling point: the “C” in their Christian Democratic Union.

Their outrage marks a new take on an old CDU blind spot: immigration. Decades after Germany welcomed the first economic migrants from Greece, Italy and Turkey, the CDU refused to accept that these people were anything more than “guest workers”. The guests had been here for 40 years but Germany, they insisted truculently, was “not a country of immigration”.

Only in recent years did the last CDU conservatives yield, admitting that these people were not going “home” because their home was Germany.

Now these same CDU conservatives have gone back to the future, splitting hairs between Muslims and Islam: a hesitant yes to the former, a definite no to the latter.

“Muslims are welcome in Germany and can practise their religion but this does not mean that Islam is part of Saxony,” said Stanislaw Tillich, CDU state premier of Saxony at the weekend.

As head of Saxony’s conservative CDU party, he is on the front line with Pegida and the AfD. Rather than wait for assistance from Berlin, Mr Tillich and his allies have decided to go for broke. If they can’t beat Pegida/AfD, they will make a play for Pegida’s angry supporters with diffuse demands, united only in their Zukunftsangst, or fear of the future.

Pegida is not dead yet but the battle for its supporters has already begun. A coarsening of German political discourse – on Islam, asylum and other migration issues, seems inevitable.

And, after years on the back foot in the CDU, Mr Tillich’s mutinous mutterings may mark the moment that the CDU conservatives begin to push back against their centrist leader.