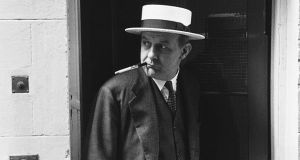 John Betjeman: his transfer back to London after three years as press attaché at the British consular mission in Dublin was front-page news. Photograph: Hulton-Deutsch Collection/Getty Images

‘The Irish Press reviews are good”, the future British poet laureate John Betjeman told the London book publisher Hamish Hamilton in September 1942. He urged him to send review copies of books to the newspaper because of its large circulation and because its literary editor, MJ McManus, “is a great friend of mine and personally friendly to us”.

Betjeman was more than mid-way through his three-year term as press attaché at the British consular mission in Dublin, where his Irish literary friends were starved of new books to read and review because of homegrown censorship and wartime restrictions on book publishing in England.

Although Betjeman initially hated his Dublin role, he established lasting friendships with a coterie of writers that included Patrick Kavanagh, Frank O’Connor (“the best writer here”), Sean O’Faoláin (then editor of the Bell), Brinsley MacNamara, Terence de Vere White and Maurice Craig. Kavanagh wrote the poem Candida for the first birthday of Betjeman’s only daughter, who was born in the Rotunda Hospital in Dublin and who edited two volumes of her father’s letters for publication in the 1990s.

Another close friend was Emily Villiers-Stuart, an American beauty who had been married to Lord Hemphill of Tulira Castle, near Gort, Co Galway. Betjeman’s Collected Poems (1958) includes Ireland with Emily, which commemorates a bicycle tour of the nearby Burren with her. It begins: “Bells are booming down the bohreens/White the mist along the grass/Now the Julias, Maeves and Maureens/Move between the fields to Mass.”

Betjeman had been a regular summer visitor to Ireland since his youth. He usually stayed with Oxford University friends Michael Rosse at Birr Castle in Co Offaly or the Pakenham/Longfords at Tullynally Castle, in Co Westmeath.

In 1938 he wrote to his mother: “I have written all that I have written which was worth writing in Ireland, and I regard it as salvation. I think it possible that should Europe collapse, Ireland will become what it was in the seventh century, the last house of civilisation in the Dark Ages”.

He designed a stage set for a Christine (later Countess) Longford play at the Gate Theatre in Dublin and he sought to purchase a house in Ireland until his wife objected. His first job after university was as private secretary to Sir Horace Plunkett, the Irish agricultural reformer and politician who spent his later years in Surrey.

Though suspected by the IRA of being a spy, Betjeman was very active socially while based in Dublin. He took Irish language classes and often began and ended letters with “a chara” and “le meas mór, do chara dhílis, Seán Ó Betjemán”. Food rationing was not as severe in Dublin as it was in England, but he wrote to one friend: “Guinness good. Sherry good. No wine. No coal. No petrol. No gas. No electric. No paraffin.”

He complained that his propaganda duties and social life were preventing him from writing poetry, but he rationalised: “One friend gained for England is one enemy for Germany and that is my job”. He told another friend: “I have to see Pro-Germans, Pro-Italians, Pro-British and, most of all, anti-British people. The German Legation here is pretty dim and repulsive. I have to see journalists, writers, artists, poets. I have to go about saying ‘Britain will win in the end’ and I have to be charming to everyone and I am getting eaten-up with hate of my fellow beings as a result”.

His mixed feelings about being offered a new job at the Ministry of Information in London in late 1943 are spelled out in a letter to Frank Gallagher, the head of the Irish government’s information service, first editor of the Irish Press and author of two acclaimed War of Independence books. “It all sounds rather like a bereavement and it is one”, he wrote. “I am very depressed at going. So many friends made, so much kindness . . . Oh dear, I am sad”.

His impending transfer back to London was front-page news on The Irish Times.

A single-column story ran almost the full length of the page under a three-deck headline and it included a photograph.

It reported: “He took the highest possible view of his duties as press attache and looked upon it as his duty not only to interpret England to the Irish, but also to interpret Ireland sympathetically to the English, and if any English pressman or visitor went away with an unsympathetic view of Ireland it was not the fault of Mr Betjeman.”