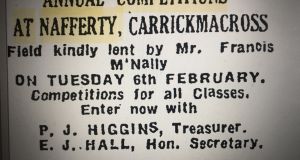 “I found a mention from 1945, in the Anglo-Celt (a Cavan newspaper, but with expansionist ambitions)”

The townland I grew up in is generally known in English as “Nafferty”, although there are variant spellings. It’s a jaunty-sounding name and becomes even more so when you consider that the people who owned the next field up from us were “Rafferty”. That they didn’t live there spoiled the joke only slightly.

As Irish scholars among you may know, however, the name has sombre origins. Originally “Na Feartaigh”, it means “the Graves”. But if there was an ancient burial place there once, there is no trace of it now. The root word is certainly ancient.  In his landmark The Origin and History of Irish Names and Places (1869), Patrick Weston Joyce says it was “originally a pagan term”, inherited by the early Christians.

He quotes the ninth-century Book of Armagh to the effect that the daughters of King Laeghaire – a contemporary and enemy of St Patrick – were buried in a “ferta”. And Joyce mentions “Nafarty” (his spelling) as one of the Irish placenames in which the word itself was now buried.

The name has endured some unfortunate translations. The earliest recorded English version, from 1630, was “Fferts”. But there followed a decadent period when that extra “f” fell away and the vowel changed from “e” to “a”.

Thus it was as “Farts” that the Irish scholar John O’Donovan found it recorded in 1835, during the first Ordnance Survey. As he rightly declared: “The anglicisation is too barbarous.” It must have been after this that locals reinstated the “e”, perhaps out of respect for the ancient departed.

Located on the northern edge of Carrickmacross, the townland is distinguished among the living these days for having both the local GAA and soccer pitches. And as I wrote earlier this year, the soccer field enjoyed national fame in 1993 when Jack Charlton’s Ireland used it as a training base.

But it’s extraordinary what you find when you go digging, especially in a place called The Graves. Searching for “Nafferty” in the Irish Press archive, for example, I was intrigued to see it mentioned in a short story from 1946, by a man named Bernard Duffy.

It turned out to be one of his characters, “James Nafferty”, rather than a location. But Duffy was billed as author of a novel called Oriel, which is an old name for Monaghan. And when I looked the novel up, I found it was set in a town called “Farney”, a thinly disguised Carrickmacross.

As I now know, Duffy was indeed born in Carrick, in 1882, before a rarefied education took him to Clongowes, Trinity College, and the Law Library.   Novels aside, he also became a successful playwright, his work regularly performed at the Abbey. And yet I had never heard of him.

Then again, he seems to have been forgotten even half a century ago. An exception in this newspaper’s archives may only prove the point. In an Irishman’s Diary of 1976, my unnamed predecessor eulogises Denis Johnston, then 75, as ranking “second only to Bernard Duffy in the hierarchy of Ireland’s senior playwrights”.

This implies the diarist believed Duffy was still alive. And if so, he would indeed have been senior: about 94. Alas, records suggest he had expired a quarter of a century earlier, in 1952.

It seems that in mentioning the 2018 Nobel laureate Olga Tokarczuk recently, I made the common mistake of assuming the translation of her book Drive Your Plow over the Bones of the Dead (the title is inspired by William Blake), used the “American spelling” of plough. Which it does, except that like many American spellings, it used to be the English spelling too, and still was when Blake was writing.

In my defence, this is not the worst misunderstanding of Blake’s work. “Drive your [cart and] plow over the bones of the dead” was one of his “Proverbs of Hell”, a more famous example of which is: “The road of excess leads to the palace of wisdom”. Taken out of context, that must have inspired many a rock star to think that Blake endorsed had living as a path to enlightenment. He did no such thing. His “Proverbs from Hell” were what the devil would advise, not him.

This takes me back, a little disturbingly, to my home townland. Because again while searching for it in the archives, I found a mention from 1945, in the Anglo-Celt (a Cavan newspaper, but with expansionist ambitions). It was from an advertisement by the South Monaghan Ploughing Association, announcing their annual competitions at Nafferty, “in a field kindly lent by Mr Francis McNally”.

Oh dear. I hope they didn’t turn up bones.