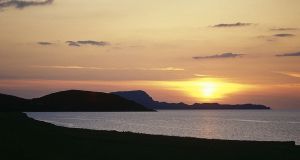 “Clare Island has been a mirage for the last four months for this coronavirus-confined granny whose solitary confinement meant that all conversations – mainly Gooh-Goohs and Gah-Gahs – with the first grandchild were through a mobile phone screen.” Photograph: Getty Images

It is Mini Madam’s maiden voyage and she is the only one onboard not wearing a mask as the Clew Bay Queen slips out of the little harbour at Roonagh pier near Louisburgh.

Clare Island has been a mirage for the last four months for this coronavirus-confined granny whose solitary confinement meant that all conversations – mainly Gooh-Goohs and Gah-Gahs – with the first grandchild were through a mobile phone screen.

Baby Ada lives a world apart in Cork, the recently reaffirmed real capital of the country, and I live in Westport, the fiefdom of former minister Michael Ring.

But here we are now setting sail for the Co Mayo island where 16th-century pirate queen Granuaile (Grace O’Malley) once tied the ropes from her galleys to her big toe as she slept in her castle overlooking the harbour. It is the island where Ada’s pirate princess mammy grew up and her Granddad O’Malley was born.

Where these days he is busy preparing to launch his boat Nora Daly, named after the mythical woman who once wandered the byways and boreens from Tormore to Capnagower, Ballytoughy to Bunnamohaun, impervious to wind, rain or snow; the woman who the Sawdoctors wrote about in their song: “Will you meet me on Clare Island.” “Gettin’ weary of the city/ Seems so many things have changed/ Let’s head off for Nora Daly’s home/ Where she’s walked/ It never rained.”

Of course Ada is only eight months old and oblivious to the seismic changes in the world around her. Her needs are simple and so now she is immersed in the mesmeric motion of the ferry boat and the warm waves of south-westerly wind blowing gently in over the horizon.

She knows nothing yet about plagues and pandemics or that her grandfather used to foot turf with a sléan and went to school across the fields in his bare-feet with a “breisín” of turf under his oxter and a thick slice of soda-bread in his satchel.

She knows nothing either about this microcosmic world where, in 1909, naturalist Robert Lloyd Praeger, of the Royal Irish Academy (RIA), brought a flotilla of geologists and anthropologists, archaeologists and botanists, zoologists and etymologists to undertake a ground-breaking multidisciplinary study of a defined place.

Or how her granny headed off on a trek up the Big Hill (Knockmore) a couple of summers ago and nearly came a-cropper during a most ill-advised crossing of the high stone wall that separates the commonage lands from the land the Congested Districts Board striped into farms in the 1890s.

As this diarist clearly recalls, my clever canine companion, Samhradh, had already found a way through a small gap in the 5ft 6in-high wall and barked a warning as this stupid human teetered on top of it before stone-by-stone it collapsed in slow motion, depositing me on my backside in a soft and stunned thud of blancmange bog.

Now as we make the seven-kilometre journey from the mainland to this outpost which has weathered so many lockdowns due to swells and storms, I think of all the generations who have eked out livelihoods in its nooks and crannies.

And as the dramatically shaped mass of land rises before us – it is often likened to a great sleeping whale guarding the entrance to the bay – I think of the Cistercian monks who created a gallery of medieval wall-paintings in St Brigid’s Abbey. It has been restored and re-roofed and now dominates the cluster of buildings – school, church and presbytery – in the centre of the village of Kille.

Founded in the 13th century, it was originally a cell attached to Abbeyknockmoy in Co Galway. Its two-phased iconographic series of imagery – harp and lyre players, a fire-breathing serpent and a double-headed eagle, a medieval knight in chain mail, spear aloft and on horseback, wrestlers and cattle raiders – is exceptional for its relative absence of religious imagery and Christian symbolism.

This significant find was discovered by conservators during the New Survey of Clare Island, led by the Royal Irish Academy and supported by the then-taoiseach, Charles J Haughey, who launched it on the island in 1991.

But this is just one small part of the unfolding cultural chronicle of this miniature world, its folktales and yarns explore the unbridled spirit of a place where land and sea enjoy an intricate interdependence.

The next chapter in the island’s story is about to be explored through the novel experience of isolation imposed by the pandemic as part of a new digital video project involving schoolchildren.

While Baby Ada is too young to participate yet, these stories and yarns will become part of her cultural inheritance.

For now we stop for a picture, after we land, below Granuaile’s castle where her mammy and sisters used to pretend they were pirates when they were children.