The Full Brontë – Frank McNally on Anne Brontë, having the craic, and the pub with no beer-ban 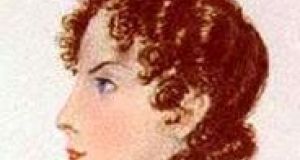 An 1834 sketch of Anne Brontë by her sister Charlotte. In The Tenant of Wildfell Hall (1848), Anne Brontë has the heroine locking a drunken husband out of the bedroom: a door-slamming said by one critic to have reverberated across Victorian Britain.

A recent letter to that bastion of British conservatism, the Spectator magazine, lamented the latter-day tendency, even there, of spelling [the]“crack” as “craic”, as if there had been never been an English equivalent of the concept.

I’ve lamented it myself in the past, God knows, while accepting that it’s a small revenge for centuries of Irish names being anglicised.

But the amusing part of the letter was that in decrying the “bogus Gaelic spelling” of a word long used in the north of England and Scotland, the writer continued: “I could quote sources from Anne Brontë to my Tyneside grandfathers – who would claim to my grandmothers that they went to the pub ‘for a bit of crack’.”

Now there was an irony. If you entered that in an irony competition, in fact, it might win a prize.

Because, of course, speaking of bogus spellings, “Brontë” is one of the more spectacular examples in the history of English.

Before he left his native Co Down and poverty, the future patriarch of the family was a mere Patrick “Brunty”, which along with the equally anglicised “Prunty” is a common approximation of an old Ulster Gaelic name, Ó Prontaigh.

He only became Brontë, complete with the exotic diaeresis, when in Cambridge University, probably thinking of a title then recently conferred on Lord Nelson, “Duke of Bronte”, from a place in Sicily that was named in turn after one of the Cyclopes of Greek mythology.

The trick worked well. Among the things Brunty had inherited from Ireland were his good looks. Those must have been Gaelic too.

But as if taking her cue from his personal rebrand, a biographer of his daughter Charlotte would describe the old man’s face as having had “all Greek lines”.

Anne Brontë was born 200 years ago today. And no more than her sisters, she is not now someone you think of as having had the crack much, however spelt. Their ne’er-do-well brother Branwell was the one who spent too much time in pubs.

She was considered the most reserved of the three and is still the least famous. But her second and final novel The Tenant of Wildfell Hall (1848) was a huge success and in ways very radical for its time: especially on the subject of alcoholism and its effects on family life.

In an era when married women had no escape from bad marriages, and few rights in general, Brontë has her heroine locking a drunken husband out of the bedroom: a door-slamming said by one critic to have reverberated across Victorian Britain.

The character ultimately flees her situation. And in this, the writer drew inspiration from similarly radical advice dispensed by her father when, as an Anglican clergyman, he was approached by a real woman in the same situation. Departing from the then usual church line, he urged her to leave.

The Brontë bicentenary aside, and speaking of the evils of drink, today is the also the 100th anniversary of US prohibition.

Which on Thursday, in one of those strange coincidences, set me rereading Joe Mitchell’s celebrated essay about McSorley’s Alehouse before, minutes later, opening The Irish Times to learn of the funeral of Matty Maher, most recent proprietor of the famous pub.

Founded in 1854 by Tyrone man John McSorley, who first called it “The Old House at Home” in reference to the place in Omagh he had modelled it on, the pub became noted for his and subsequent owners’ reluctance ever to change anything.

Writing about the founder’s son Bill McSorley, Mitchell said it “appeared to pain him physically” if things had to be altered or repaired.

For 20 years under his watch, the bar counter developed a deepening sag until it threatened to collapse. So finally, in 1933, McSorley hired a carpenter to fix it, but while the work progressed “sat at a table in the back room with his head in his hands and got so upset he would not eat for several days”.

As for the years when the Volstead Act banned alcohol sales, that was business as usual, or nearly. Yes, the pub’s supply line had to be reinvented.

An old brewer called Barney Kelly came down from the Bronx three days a week to concoct something so strong and raw that McSorley had to dilute it before selling the result as “near beer”.

But nothing else changed, according to Mitchell: “When prohibition came, Bill simply disregarded it. He ran wide open. He did not have a peephole door, nor did he pay protection, but McSorley’s was never raided; the fact that it was patronized by a number of Tammany politicians and minor police officials probably gave it immunity.”