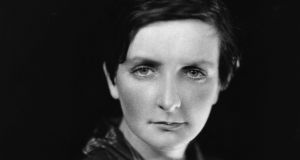 Kate O’Brien: now the subject of the first temporary exhibition in the handsome new Museum of Literature Ireland (MoLI), which has in turn risen from what used to be the exam hall of UCD’s Newman House. Photograph: Sasha/Getty Images

Coming from Limerick to start college in Dublin is an interesting experience at any time. To have done it in the autumn of 1916, as the St Stephen’s Green campus of UCD looked out on a city still in ashes from the Easter Rising, must have been a gift to the imagination of a future writer.

It also helps explain why that writer, Kate O’Brien, is now the subject of the first temporary exhibition in the handsome new Museum of Literature Ireland (MoLI), which has in turn risen from what used to be the exam hall of the university’s Newman House.

As with many of Limerick’s middle-class schoolgirls, O’Brien’s secondary education had been at Laurel Hill convent school, where in the words of a nationalist newspaper of the period, students were traditionally prepared for life as the wives of “bank managers and British colonial governors”.

The bank manager part of that jibe would have hurt the nuns more, O’Brien recalled years later. They had higher ambitions for their graduates than branch banking.

But they could hardly have aspired to producing the likes of her, either: an “intellectually informed, sexually dissident, collapsed catholic”, as a biographer put it, who also managed for much of her career to be a best-selling novelist.

Curated by Kathy Rose O’Brien, an actress and grandniece of the writer, the MoLI show mirrors the lack of convention in its subject’s life. It’s set on a floor that evokes a bullring, for one thing, reflecting Kate O’Brien’s love of Spain and her Hemingwayesque fascination with bullfighting.

Then there are the stage-style props, which include a school desk and café table. Unusually too, you can eat part of the set, or you could on Monday’s opening night at least, when fresh churros adorned the table.

The opening featured a reading of an extraordinary exchange of letters from the mid-1930s between O’Brien and her brother-in-law Stephen O’Mara, which among other things illustrated how deeply entangled she was with the independent but ultra-conservative Ireland that, to her disappointment, emerged from the Rising.

Mayor of Limerick then, O’Mara was the Clongowes-educated scion of a Limerick bacon empire. He was also a close friend of Eamon de Valera, close enough to be among those considered for appointment as governor general – the British crown’s titular representative in Ireland – when Dev embarked on his policy of ignoring the role out of existence.

But as represented in his letters, O’Mara was a man of high and severe intellect, who simultaneously considered his sister-in-law a coming genius of Irish literature while believing her then latest novel, Mary Lavelle, to be a terrible mistake.

Everything about its depiction of a young Irish governess in Spain having an illicit affair with the son of an aristocratic family was false, O’Mara thought. So over several letters, he and O’Brien batted the argument back and forth, fiercely, in mutual mystification at the other’s wrong-headedness.

They were no nearer consensus by the end, it seems, but O’Mara was closer to the thinking of de Valera’s Ireland. A few weeks later, the book was banned.

It was not short of company in those years. Since the start of the new puritanism under WT Cosgrave’s government in 1929, hundreds of books had already fallen foul of the censor, as had many newspapers and comics, mostly British.

One of the exhibits in MoLI’s general collection is a contemporary handbill listing three classes of periodical to be blacklisted. Class I – “habitually rankly immoral [or] very frequently so” – included News of the World, the Sporting Times (“known as the Pink ’Un”), and Illustrated Police News.

Class II – “extremely undesirable” – included Woman’s Weekly and Woman’s World.  As for Class III, the bill noted that officials were “examining a few dozen specimens” in this category, none named, but all said to be “of the milk-sop character”. “Milksop” was officially defined as a “spiritless man or youth”. Here, it appears to have been a euphemism for “homosexual”.

Speaking of which, a single line on that theme was enough for a later O’Brien novel, The Land of Spices (1942), to be banned too. Set in a thinly disguised Laurel Hill, the book has some spirited satire at the expense of Limerick’s bourgeoisie, nuns and all. But it was a mild reference to two male characters being found “in the embrace of love” that saw it struck down by the censor.

The MoLI exhibition, entitled “Arrow to the Heart”, runs until January 29th. And if you see that, you may also be interested in a visit to the Kate O’Brien Festival, an annual event in Limerick since 1984, which this year starts on February 23rd.

1 A vegetarian and a non-drinker visit Ireland: here’s their verdict
2 Eyewitness to Auschwitz: ‘We were held in the wagons like animals’
3 Rory Best regrets attending Belfast rape trial
4 Are there annual limits on inheritances or gifts to a child?
5 Who are Ireland’s 17 billionaires?
Real news has value SUBSCRIBE