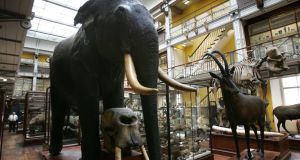 “The Natural History Museum is one of Dublin’s odder treasures and resolutely of its time – rambling, gothic and vaguely unnerving.” Photograph: Frank Miller

We peered at a baby lion, curled up, for all the world, fast asleep.

“Did people just find the baby lion dead or did they kill it?” my eight-year-old niece inquired.

Now, that was a tough question. Because of course she was right.

That baby lion, stuffed and on display in the Natural History Museum was never going to wake up from its cute, snuggly nap. Ever.

The idea of this little cub washing up on a beach or appearing at the side of the road, the victim of an unfortunate accident or even succumbing to a long, lingering illness, while being nursed over lovingly by a passionate park ranger, was almost too hard to resist. The truth is, I wasn’t sure myself. Did they actually kill this ball of fur? I knew those Victorians were a cold, mad lot, obsessed with scientific knowledge but would they really do that?

“I think they killed it”, I found myself saying, “but they don’t do that anymore.”

Young children, of course, have a far greater empathy with animals than their grown-up counterparts

The Natural History Museum is, of course, one of Dublin’s odder treasures and resolutely of its time – rambling, gothic and vaguely unnerving.

Everything about it exudes an opposition to modern life. There are no levers to pull or buttons to press, no whizzes, no bangs and no flashing lights. The only reveal, as such, involves the pulling aside of those brown leather covers to view row upon row of insects and butterflies, mercilessly pinned to a bland background.

Had they lived long, happy lives before being pinned to that board?

Young children, of course, have a far greater empathy with animals than their grown-up counterparts.

They read up about them, they draw pictures of them, they put stickers of them on their bags and posters of them in their rooms, and they will always have a list of their particular favourites on the go.

Giraffes, at that time the number one with my friend’s nephew, were on display in the actual zoo weeks later and there was much speculation over whether the smaller, younger specimen was the one seen recently on TV. There was only one way to confirm this, of course, but as the animal in question stubbornly refused to respond when its name was being called, repeatedly and at full volume, we left not knowing for sure.

As adults, we tend to have outgrown all of this. We don’t generally take to the floor to announce a list of animal preferences, one through five. My niece, on the other hand, mulled these things over at length, solemnly informing us, during that same visit, that ostriches had recently been upgraded to the detriment of their avian cousins, penguins.

Upon inquiry, it all seemed to have come down to that cute fluffiness around the mid-riff. Clearly it’s an ostrich-eat-penguin world out there when it comes to animal popularity contests.

But maybe we too should start giving these issues a little more consideration.

We are responsible for the overall demise of the animal population, after all. And for every species that zoos do manage to revive or even maintain at a chugging-along kind of pace there are, it seems, thousands of others out there disappearing fast. Or indeed not out there, as the case may be.

Turns out those Victorians were in the ha’penny place when it comes to wiping out great swathes of the animal population.

And anyway, chances are that our baby lion left behind a thriving pride of siblings and half-siblings and cousins and half-cousins, lazily wandering the savannah, when it no doubt abruptly breathed its last.

That day in the zoo, we came across a monkey that rubs urine over its skin for reasons that completely escape me now

Which, in fairness, was probably of limited consolation at the time.

I’ve begun to think a lot about my own list of late and don’t want to go down the obvious route.

Those pandas and bush babies and koalas and, yes, lions get enough of a hearing already.

That day in the zoo, we came across a monkey that rubs urine over its skin for reasons that completely escape me now, and a mammal of some sort that spends most of its time asleep in the crook of a tree.

Their gene pools, it seems, are depleting by the day.

I’m not entirely convinced that in both cases behaviour and predicament are unrelated.

After all, the smearing-your-body-in-pee option is an entirely rational response to imminent species extinction followed closely by quiet, defiant oblivion.

I’ve come to admire the approaches they’d taken and so am formally awarding them joint first place.