Gender equality is not only a moral imperative, it’s also smart realpolitik 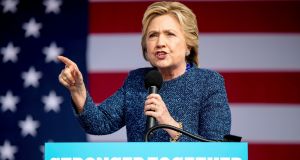 Hillary Clinton, when she was US secretary of state, proposed integrating women and girls into everything her department did. Photograph: Andrew Harnik/AP

There’s a type of foreign policy dilemma that diplomats frame as follows: should we do what’s morally right and makes us feel good about ourselves, or what makes the country better off and thus improves our citizens’ lives? In Ireland it comes up every time the government sends a high-level trade delegation to visit some autocratic regime and hapless ministers find themselves having to flatter despots who oppress their own people.

Earlier this year, the debate over whether then taoiseach Enda Kenny should visit Donald Trump in the White House for the annual St Patrick’s Day party played out in similar terms. In cases such as these, the Government position is almost invariably that snubbing world leaders would be so damaging to the State’s economic interests as to be beyond contemplation.

A senior Irish official once marvelled to me about how little Scotland sought to exploit its connection to Trump (the US president’s mother was born in the outer Hebrides). “Imagine if it was the Aran islands. We’d be wetting ourselves,” the official said. “It means they miss out on some opportunities we get. Maybe they sleep better at night.”

That type of ultra-pragmatism – the belief that when values and economic interests conflict, there will be only one winner – informs the misgivings of some western diplomats towards an important idea that has been steadily gaining traction in recent years: feminist foreign policy.

Yet the more we learn about the dynamics of global development and conflict, the more obvious it becomes that applying a feminist lens to a state’s external dealings is not only a vital goal in itself but a precondition for progress in achieving peace, making the world more secure and lifting people out of poverty.

The standard-setter is Sweden, whose Social Democrat-led government in 2015 proclaimed it would pursue a feminist foreign policy that put the advancement of women’s rights at the centre of all its overseas work. It had a significant impact not only on the choices Stockholm made about its aid spending – Sweden is one of the biggest per capita aid donors in the world – but on the way it conducted its foreign relations generally.

On one occasion, foreign minister Margot Wallström pulled Sweden out of an arms deal with Saudi Arabia over concerns about women’s and human rights.

Following Sweden’s example, Canada last month unveiled what it called the country’s “first feminist international-assistance policy”, with plans to spend at least 95 per cent of its foreign aid in a way that helps improve the lives of women and girls.

The idea of focusing on women’s rights in foreign policy is hardly new. If you read The Global Island, the Department of Foreign Affairs’s glossy brochure about what it does, published in 2015, you won’t find a single mention of feminism. But you will find references to gender equality, genital cutting, gender-based violence, forced marriage and the importance of women’s participation in peacebuilding.

As US secretary of state, Hillary Clinton proposed integrating women and girls into everything her department did, but without giving it the label the Swedes employed.

Tackling the systematic and global subordination of women is clearly good in itself. But it’s also smart realpolitik. Global GDP would increase by $28 trillion if women were to play an identical role in labour markets as men, according to the World Economic Forum (at current rates of progress that will take 170 years).

A growing body of research also suggests that gender equality not only makes the world richer, but safer as well. One UN study found that peace agreements were significantly more durable when women took part in the negotiations. Sex and World Peace, a 2012 book by Valerie F Hudson, Bonnie Ballif-Spanvill, Mary Caprioli and Chad F Emmett, presents data suggesting that the more violent a state and its citizens are towards women, the more violent that state will be overall.

“In fact, the very best predictor of a state’s peacefulness is not its level of wealth, its level of democracy, or its ethno-religious identity; the best predictor of a state’s peacefulness is how well its women are treated,” Hudson has written. The authors go even further: they suggest that, in the future, the “clash of civilisations” will be based not on ethnic and political differences, but on beliefs about gender.

So far few western countries have shown themselves willing to follow Sweden by taking this to its logical conclusion and, as with the Saudi example, confronting their own double standards in a way that carries short-term cost. But, in this case, values versus interests is ultimately a false dichotomy.

Abandoning it is essential to the social, economic and political empowerment of women – what William Hague, as UK foreign secretary, described as “the great strategic prize of the 21st-century”.