The arts are evolving and so must the Abbey Theatre 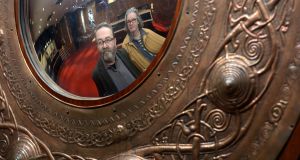 In 2015, the Abbey Theatre board appointed Graham McLaren and Neil Murray, above, as directors, with the intention they would reimagine the production model of the theatre. File photograph: Dara Mac Donaill

On Monday, as chair of the board of the Abbey Theatre, I received a copy of the letter to Minister for Culture Josepha Madigan signed by more than 300 freelance theatre practitioners, expressing concerns about the Abbey’s current production model.

Specifically, from review of the letter, I note their request that the theatre engages in a greater percentage of in-house productions, and their demand that all artists whose work is staged by the theatre are given National Theatre terms and conditions.

There is no doubt but that people working in the arts in Ireland face huge challenges in making a living from their craft.

The Government’s commitment to double the funding for the arts is both necessary and welcome.

I am pleased to have this opportunity to set out the board’s view on the current direction of the Abbey Theatre and the governance context.

The board’s most important roles are to appoint the director(s) and set strategy and overall policy for the theatre. On artistic programming, our role is to ensure the directors’ programming choices reflect our strategy, showing creativity, diversity and ambition while maintaining financial sustainability and meeting the board’s commitment to increased gender equality.

Artistic decisions and the day-to-day running of the theatre are the remit of the directors.

As the recipient of €7 million in public funding, the board and directors are committed to supporting the widest range of artists, making best use of our resources to bring our work to a growing and diverse audience.

In 2015, the Abbey Theatre board appointed Graham McLaren and Neil Murray as directors, with the explicit intention that they would reimagine the production model of the Abbey, opening it up to more diverse voices and new types of theatre making, while reinvigorating its rich canon.

The directors’ programming over the past two years, and into 2019, reflects the board’s policy and strategic direction. The programme also reflects the funding challenges facing theatre production in the wider sector in Ireland, making it paramount to collaborate with and support the wider Irish theatre ecosystem.

Recently, the board, together with the directors and Abbey staff, developed a new five-year strategy, which is published on our website. In developing our strategy, we were cognisant of Culture 2025 and of Arts Council policies. Central to our vision is that creativity should drive the theatre, developing the artists and audiences of the future.

Our mission is to engage effectively and imaginatively with all of Irish society, reflecting the theatre’s values of excellence, inclusiveness, diversity and equality, and its commitment to being “a theatre for all”.

The arts are continuously evolving and the Abbey board believes this strategy is the correct one, and that our programme will continue to respond, imaginatively, to change.

The Abbey Theatre has always co-produced and presented the work of other artists as well as self-producing its own shows. In recent years, we have increased those opportunities, while maintaining our principal role as a producing theatre. We value the benefits of such co-productions in facilitating the valuable exchange of skills and experience across the sector. The majority of these projects could not happen without the level of collaboration and enhancement the Abbey provides.

Since the letter focuses attention on the artists’ preference for employment under Abbey Theatre contracts, it is relevant to note that our data show there were 116 direct employment contracts issued in 2018, both on our stages and on tour. This is in line with 2016, the recent high benchmark year which marked the 1916 centenary.

Furthermore, the Abbey has increased its pay rates to actors over the past year and raised its allowances.

It has a collective bargaining agreement in place with Equity, and negotiates its pay and conditions with the actors’ union.

Looking at our employment data and our budgets, we can see no basis over the last year for a pay rate differential of as much as 25 per cent, as has been suggested.

We acknowledge that, in some in-association and presentation arrangements, it is possible that actors were paid less by the independent company than they would have been paid on Abbey rates, and in some cases, actors may have been paid more.

A key focus of this production model is to increase the range of plays on offer to audiences. The three-year average of 49 productions in 2017-2019, compares with the corresponding average of 36 for 2014-2016.

We on the board are delighted to see audience numbers are increasing strongly and are now more demographically and socially diverse. We are firmly convinced that young and more diverse audiences must be won if theatre in Ireland is to continue to be vibrant and, for the Abbey, this type of production model is key.

We acknowledge that this increased level of production has resulted in shorter runs for some shows. However, it should be noted that some runs are significantly longer. We recognise that these outcomes negatively affect some individual actors and freelancers, while positively affecting others.

We have reached out to the signatories of the letter, and look forward to meeting with their representatives to commence a productive dialogue.

Frances Ruane is chair of the board of the Abbey Theatre

1 A vegetarian and a non-drinker visit Ireland: here’s their verdict
2 Leaders’ debate: For one dramatic moment, the Taoiseach is like a rabbit in headlights
3 ‘I don’t know if he died . . . but I don’t want him in the Tuam tanks’
4 Are there annual limits on inheritances or gifts to a child?
5 Miriam Lord: The left limbers up to woo Mary Lou
Real news has value SUBSCRIBE