June 6th, 2018: After two days of events organised by Justice for Magdalenes former Magdalene Laundry residents felt that they finally 'got justice' and are 'believed and accepted as real people'. 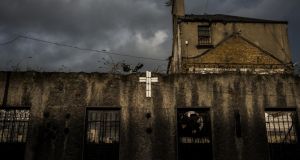 The back wall of the Magdalene laundry on Gloucester Street in Dublin, which closed in 1996. The remaining structure was demolished last year. Photograph: Paulo Nunes dos Santos/New York Times

This year, politicians must do what is right by survivors and family members of deceased victims of all forms of so-called historical abuse in Ireland.

It is a milestone year. The Mother and Baby Homes Commission of Investigation is to report next month and in May it will be 20 years since then taoiseach Bertie Ahern’s State apology for abuse suffered by tens of thousands of children in residential institutions.

It is to be hoped the Government will announce a dedicated independent archive of institutional and care-related records. It might stand at the former Magdalene laundry in Dublin’s Seán McDermott Street or at a purpose-built memorial to the victims and survivors of our tortuous history.

I hope to see legislation in 2019 that gives explicit rights of access to personal files for all those who were institutionalised in any setting; to all adopted people and others who were put into formal or informal care as children; for all parents whose children were taken from them and next of kin of those who died.

Legislation should be introduced requiring the deposit by all State, religious and private holders of records relating to institutional care, adoption and other forms of family separation in this new independent archive.

Archivists could help people access their personal information and establish public access to administrative records, so that survivors, researchers and the Irish people could piece together an understanding of how our State allowed terror reign, and to show how we could prevent repetition.

Crucially, the archive would invite the deposit of personal testimony as desired by each witness so that people could be sure they would not be forgotten and their experience could inform future generations.

The United Nations special rapporteur on transitional justice has previously advised: “Archives containing records of mass violations can contribute to prevention . . . One notable example in this regard are the Stasi files opened up by Germany after 1989. Opening files contributes directly to the process of societal reform.”

For 20 years Irish politicians and government officials have silenced survivors of so-called historical abuse and perpetuated grave and systematic human rights violations by prohibiting the release of information.

Under legislation governing the mother and baby homes commission it is a criminal offence to publish evidence given to the commission in private. The commission has refused to give any of the witnesses before it a transcript of their own testimony.

Similarly, it is a criminal offence for anyone who received money from the Residential Institutions Redress Board (RIRB) to publish information about their award that could identify an individual or institution involved in their abuse.

By law none of the evidence produced to the commission is admissible in civil or criminal proceedings. A similar prohibition applies to evidence given to the Ryan commission.

When questioned by the UN Committee Against Torture about the very low rate of prosecutions arising from the Ryan commission’s findings, the Government explained: “The provisions governing the Ryan commission’s work precluded the disclosure of the names of persons identified as perpetrators, hence this information was not available to An Garda Síochána for the purposes of initiating criminal investigations.”

It appears from the Commissions of Investigation Act 2004 and past High Court decisions interpreting the Act that the archive of the mother and baby homes commission will be sealed once the inquiry concludes.

The Department of Education plans to ensure that evidence of abuse in residential institutions will remain hidden as long as survivors live. A 2015 Bill proposes that records of the RIRB, the Residential Institutions Records Review Committee, and the Ryan commission will be deposited in the National Archives and sealed for 75 years from the date of those bodies’ dissolution.

The archive of the McAleese committee, which contains all State records concerning Magdalene laundries, is being held in secret by the Department of the Taoiseach.

Meanwhile, adopted people have no statutory entitlement to know who they are or to obtain their early life records, and parents whose children were forcibly taken from them have no clear way of accessing their own files either.

The mother and baby homes commission has also refused to disclose to individuals personal records it has gathered from the child and family agency Tusla.

Can we change the course of this history in 2019? We must.

Maeve O’Rourke is a member of Justice for Magdalenes Research, co-ordinator of the Clann Project and has been appointed lecturer in human rights at NUI Galway