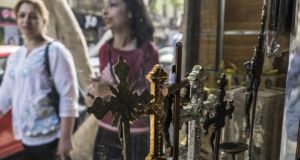 Crucifixes for sale in a Cairo shop. Christians are a significant minority in Egypt, as 10 per cent of the population are Coptic Orthodox. Photograph: Khaled Desouki/AFP

At the high point of the Christian year, Easter, the bombings of two churches in Tanta and Alexandria in Egypt are a sombre reminder that there are places in the world where simply being Christian and practising your faith means risking death and displacement.

This was a phenomenon all too familiar to Irish Catholics in centuries past.  Our landscape is dotted with Mass rocks where people risked death or imprisonment in order to celebrate the eucharist.

But however ancient our Irish Christian heritage is, the Egyptian Coptic church is one of the oldest in the world. It can credibly trace its development to St Mark, who was one of St Peter’s closest companions.The word “Copt” is thought to be simply a distortion of the word for “Egyptian”. There have been persistent rumours of links between the ancient Irish and Egyptian churches.

When a priceless artefact dating from the early ninth century, the Fadden More psalter, was found in a Tipperary bog in 2006, the leather cover was lined with Egyptian papyrus, a tantalising hint of contact between ancient Egyptian and Irish monastics.

Christianity predates Islam in Egypt by centuries. The advent of Islam in Egypt did not immediately result in persecution. Muhammad had a particular fondness for Maria the Copt (Maria al-Qibtiyya) who gave birth to his son, Ibrahim.

As a result, Coptic Christianity was allowed to exist unhindered for centuries, provided Christians could pay the jizyah, or tax that gave them protection from the Muslim ruler.

Christians are a significant minority in Egypt, as 10 per cent of the population are Coptic Orthodox, along with tiny numbers of Coptic Catholics and newer evangelical churches. However, they have minimal representation in parliament.

Their current situation is precarious, and the dangers long predate the current spate of bombings and murders.

As usual, it is not a simple tale of religious persecution but it is inextricably linked with politics. So-called Islamic State is an apocalyptic cult with an active interest in bringing about the end of the world but it also comprises corrupt thugs who enjoy the power, including the power to rape and loot, which their campaigns bring.

Christians in Egypt face more than Islamic State. There has long been a low-level campaign of harassment against Christians, particularly in rural areas, to which Egyptian police turned a blind eye

Its standard tactic, designed to destabilise a society, is to target Christians, as well as Muslims it condemns as untrue to the message of Allah. As its campaigns falter in Iraq, it seeks distraction in high-profile outrages elsewhere.

However, Christians in Egypt face more than Islamic State. There has long been a low-level campaign of harassment against Christians, particularly in rural areas, to which Egyptian police turned a blind eye.

This has escalated in recent years. In 2013 there was a wave of church burnings, and far from assisting Christians to rebuild, building regulations for churches passed under President Abdel Fattah el-Sisi’s government are far stricter than for mosques.

Last year, when Islamic rioters stripped naked an elderly Christian woman, Soad Thabet,  and paraded her through the streets because her son was allegedly having an affair, the Egyptian government did not prosecute her attackers.

However, they are prosecuting her son for alleged adultery. Soad Thabet’s house and those of seven other Christian families were burned to the ground.

Christians in Egypt have felt compelled to throw in their lot with el-Sisi because they had few other options. He has made symbolic gestures such as attending midnight mass. But el-Sisi’s regime is repressive and antidemocratic, targeting anyone perceived as an enemy.

We are familiar with the detention of the young Muslim Irish man Ibrahim Halawa for more than three years. Many feel that the current imposition of a state of emergency for three months will be used as cover for more repressive tactics, without necessarily bringing any benefit to those most in the line of fire from Islamic State.

Nor are Christians in Egypt receiving the level of international support they deserve.

While cultural elites in the West routinely condemn Islamophobia, they are also reflexively dismissive of organised religion, particularly the Christian religion, which is often painted as an enemy of progress.

If you are busy dismantling the cultural remnants of Christianity in your own country, it is hard to muster the enthusiasm to protect the rights of Christians elsewhere.

It is also true that far more Muslims than Christians are targeted by Islamic terrorism. Some of the most vicious treatment is reserved for those viewed as apostates or traitors to the true message of Islam.

However, Christians do not want to be treated as a special case. They simply want to be recognised as subjects of persecution, too, on an equal footing with others.

At the moment, they feel utterly vulnerable, unprotected and isolated.

The irony is that in Christian tradition, Mary and Joseph fled to Egypt to escape the attention of a murderous ruler. Now, Christians are being forced out of one of the most ancient Christian lands in order to escape the real possibility of murder.

Pope Francis is due to visit Egypt at the end of the month. He will obviously be a high-level target. But hopefully his presence will bring attention that is shamefully overdue to the plight of persecuted Christians there and elsewhere in the world.