On October 12th 1984, an assassination attempt on British Prime Minister Margaret Thatcher led to five deaths. MP Norman Tebbit was pulled from the debris and his wife Margaret was left paralysed. 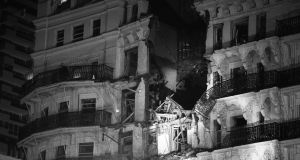 The Grand Hotel in Brighton after the IRA bombing in 1984 that left Margaret Tebbit paralysed. Photograph: PA

The death of Martin McGuinness and, in particular, Norman Tebbit’s subsequent comments raise questions about the nature of forgiveness.

Tebbit said he hoped that McGuinness would be “parked in a particularly hot and unpleasant corner of hell for the rest of eternity”.  Given that Tebbit was lifted from the rubble of a bomb set by the IRA that left his wife permanently paralysed, these are shocking but unsurprising sentiments. Five of his friends were killed the same night.

He and his wife fell through four floors, but while he was protected by a mattress, she was not. For decades, he has been a devoted carer, waking in the night to turn her to prevent bedsores, and helping her to cut up her food.

For Tebbit, who once described himself as a “fellow traveller on the Christian bus”, it is simple. Forgiveness is earned. Martin McGuinness does not deserve forgiveness because, Tebbit said, “forgiveness requires confession of sins and repentance”.

And that repentance involves making reparation by, for example, giving evidence against members of the IRA and telling grieving families exactly what happened to their loved ones.

As we know, the hot hell that Tebbit hopes McGuinness is now consigned to would have to freeze over before the former IRA leader would do any of that.

Others have chosen a different route. Jo Berry, daughter of Sir Anthony Berry, who died in the same bombing that left Margaret Tebbit paralysed, chose to forgive Patrick Magee, the IRA bomber who was responsible for her father’s death. Or, more accurately, since she believes that she used the word forgiveness too often in the beginning, she chooses to look at Patrick Magee with empathy, and to see that she might have acted the same way if she had experienced life as Magee did.

For some, that comes perilously close to excusing the inexcusable.

Patrick Magee, while now committed to peace, has never fully renounced violence or ruled it out as an option in situations of desperate oppression. Even though he says he stands by his actions, he also lives with the burden of having harmed other human beings.

He was stricken by hearing the words of Jo Berry’s daughter after one of their meetings: “Does that mean that Grandad Tony can come back now?”

And of course, he cannot. A life taken can never be restored.

Many who lost family members or friends in the violence that marred Northern Ireland would concur. And yet I keep thinking of a little masterpiece of children’s literature by Eleanor Farjeon, a short story called The Kind Farmer. At the beginning of the story, the farmer is anything but kind. He is feared for miles around because of his hardness of heart and focus on profit.

But his heart is softened by a young woman with whom he falls in love, and because she calls him “kind” he begins to do anything he can to live up to her praise. Tragically, she dies, leaving behind Little Jane, known to everyone as Littlejane, whose innocence inspires him in the same way.

No matter what motivated Martin McGuinness to enter the peace process, is it possible that he was changed by it, becoming what he practised?

Eventually, he bankrupts himself through acts of kindness and cannot provide for his little daughter after his death. But the whole village cares for her, so proud are its people of the kind farmer they once feared and despised. He became what he practised, no matter how self-serving his original motivation.

No matter what motivated Martin McGuinness to enter the peace process – and I think his motives were far nobler than Norman Tebbit allows – is it possible that he was changed by it, becoming what he practised?

The violent deaths he ordered or carried out can never be undone. But surely his subsequent actions should have a great bearing on how he is now viewed?

A high price was paid for the partial peace in the North: the willingness to forgo judicial punishment for those who committed acts of terrible violence.

One of the reasons that the peace process in the North has not progressed is because, despite the creation of new institutions, the anger, the distrust and the cynicism remain. Forgiveness has not happened.

Forgiveness does not mean excusing the past, but full acknowledgement of it, and being merciful anyway.

In any situation of terror and bloodshed, someone has to break the cycle. Someone has to reach across the divide. In his life, Martin McGuinness took that step. That will be his legacy.