Thunder Enlightening – Frank McNally on unravelling the mysteries of Finnegans Wake, with help from Marshall McLuhan and Woody Allen 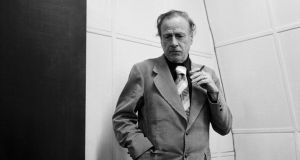 Marshall McLuhan: Not only did he read Finnegans Wake in full, it inspired one of his own defining works. Photograph: Michel Laurent/ Getty Images

To a general audience, the Canadian media theorist Marshall McLuhan (1911–1980) is now best remembered, if at all, for a few pithy phrases. He predicted “the global village”. He declared “the medium is the message”. And his visions of the future, which included something like the internet, inspired Andy Warhol’s 1968 quip that, one day, “Everyone will be world-famous for 15 minutes”.

The peak of McLuhan’s own celebrity was his cameo in Woody Allen’s Annie Hall. Allen’s character is in a New York cinema queue, passively inhaling the ideas of an adjacent bore who holds forth on various subjects, McLuhan included, to impress his date.  Finally Allen loses patience and, breaking the fourth wall, beings the real-life philosopher on set, to prove the loudmouth’s ignorance.

But among McLuhan’s lesser-known distinctions is to have been one of a still-minuscule number of people worldwide who have read Finnegans Wake in full. Not only did he read it, it inspired one of his own defining works, a book about the dangers of new technology, including electronic media, for humanity, War and Peace in the Global Village (1968).

In this, he took as his framework the 10 longest words, or “thunders” as he called them, in Joyce’s notoriously impenetrable text. These are interspersed throughout FW and appear to introduce ever-deeper cycles of sleep in the dreaming characters. The first nine are each 100 letters long, while the tenth is 101, making them an obvious reference (insofar as anything in FW is obvious) to another nocturnal saga, One Thousand and One Nights.

McLuhan called them thunder words partly because the first is a portmanteau of terms for thunder, from multiple languages. But for him, they were all loaded with meaning. They evoked the image of a “tribal man” hearing thunder as the voice of God and wondering, “What did he say that time? as automatically as we say ‘Gesundheit’.”

McLuhan believed that, in a book about the fall and rise of mankind, Joyce’s thunderclaps marked the “reverberating consequences of the major technological changes in all human history”. The first, for example, represented the progress from paleolithic to neolithic times, the beginnings of speech, and the shift from herding to harnessing animals. The third announced the wheel, transport, and the building of cities. The sixth was the Industrial Revolution, and so on.

According to McLuhan’s son Eric, who helped with the work, it took them months to “winkle out the thousands of words [implicit] in the thunders”. Even before that, he added, his father had admired Joyce as a writer of “encyclopedic wisdom and eloquence unparalleled in our time”. Afterwards, he saw him almost as a prophet.

It was my mention earlier in the week of Festy King, by the way – the Connemara name shared by one of FW’s characters and by the real-life grandfather of CNN’s election star John King – that set me reading about McLuhan.

One of Joyce’s thunderclaps occurs in the same chapter that describes the trial involving “a child of Maam, Festy King, of a family long and honourably associated with the tar and feather industries, who gave an address in old plomansch Mayo of the Saxons in the heart of a foulfamed potheen district”.

That is followed by the fourth thunder, which in McLuhan’s world-history scheme presages the coming of markets and the subordination of nature to “greed and power”.

But the Wake’s 10th and final thunder foresaw the rise of “television”, according to McLuhan. So maybe Joyce’s prophetical powers extended to hinting at the career of a real-life Festy King’s grandson.

It must be said that not everyone has found wisdom in Finnegans Wake. Woody Allen may be a case in point, although he too was inspired by Joyce to write a work of his own. His 1975 essay The Irish Genius is a less than reverent treatment of its hero, Sean O’Shawn, “considered by many to be the most incomprehensible and hence the finest poet of his time”.

That O’Shawn is a poet might suggest targets other than Joyce. Against that, his name echoes two of FW’s main characters, the bothers Shem and Shaun. And besides, the essay takes as its necessary starting point a spoof poem which Allen then analyses, with references to Joyce, Shaw, and invented others, in the literary equivalent of a drive-by shooting.

One of the fictional characters is “George Fogarty, who convinced O’Shawn to become a poet and assured him he would still be invited to parties”. But allowing for comic licence, Allen could be talking about Finnegans Wake when he adds: “Fogarty published a magazine for new poets and although its circulation was limited to his mother, its impact was international.”