Suzanne Lynch: Trump has faced down his Republican critics 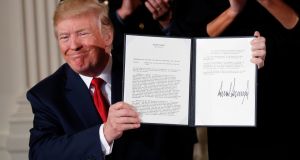 His demeanour said everything. On Wednesday afternoon, US president Donald Trump strode out on to the south lawn of the White House to board the Marine One helicopter to Dallas. As the media shouted questions, Trump stopped and spoke for 15 minutes. Even by the standards of this publicity-hungry president, his impromptu press conference was lengthy. Confident and assured, Trump took questions on a range of topics. He could have spoken all day.

Less than 24 hours earlier, an extraordinary moment in US politics unfolded when two senior members of the Republican party publicly lambasted the US president, the de facto leader of their own party. Bob Corker, the senator who holds the influential position of the foreign relations committee chair, hit out at Trump in a series of choreographed media interviews ahead of a senate lunch with the president on Capitol Hill. In calm, measured tones, the Tennessee senator whom Trump had belittled as “liddle” Bob Corker in Twitter attacks over recent months, hit back, predicting that the president’s legacy would be the “debasement of our nation”. Worse was to come when Senator Jeff Flake took to the floor of the senate and delivered a withering attack of the president as he announced he would not seek re-election. In a 17-minute speech, he said he could no longer be “complicit or silent”, as he goaded his fellow Republican senators for ignoring the president’s “reckless, outrageous and undignified” behaviour, deeming it a danger to democracy.

As most of the world looked on in awe at the fiery rebuke delivered by a senator to a president of his own party, the reaction on the senate floor was muted. Even John Mc Cain, who has been a regular critic of Trump, thanked his fellow Arizona senator for his service but did not endorse his comments. Similarly, senate majority leader Mitch McConnell praised Flake as a “very fine man” but quickly moved on to a procedural matter.

By the weekend, the silence was deafening. None of the party’s 50 other senators spoke out in solidarity with the two dissenters. The Republican leadership, including house speaker Paul Ryan has also declined to comment.

Rather than undermine the president, the episode has strengthened Donald Trump. As indicated by his comments and posture boarding Marine One on Wednesday, Trump knew he had weathered a storm.

This week’s events mark a potential watershed moment for the Trump presidency. They were the culmination of simmering tensions that have been brewing for months within the Republican party. Both Corker and Flake had been critics of Trump for some time, Flake particularly so, having written a book critical of the president earlier this year. Crucially, neither man is running for election so have less to lose than colleagues facing the prospect of future elections.

But their comments surfaced a growing divide within the Republican party that has raised questions about the future of the party itself. Ironically, while much was written in the months after Trump’s election about the future direction of the Democratic party, his presidency has also fractured his own party.

As research by Pew published this week shows, divisions within the two main political parties in the United States are now as important as the divisions between them. Just as Democrats continue to wage an unresolved battle between the centrist wing of the party epitomised by Hillary Clinton and the more left-wing ideology of Bernie Sanders, the Republican party is itself split between establishment Republicans and the new firebrand populism represented by Trump. The departure of Stephen Bannon from the White House, his return to right-wing website Breitbart News and his self-professed crusade to run anti-establishment candidates in the mould of Trump in next year’s mid-term elections has also accentuated these divisions.

The Republican establishment is worried.

The victory of Roy Moore, an ultra-conservative, in last month’s special election in Alabama over the more moderate candidate Luther Strange who was backed by the Republican leadership sent a warning to many in the party.

Crucially, the right-wing media is also behind Trump.

While mainstream US media and international outlets marvelled at the sight of a Republican senator publicly lambasting the president of his own party, commentators on the right, including the influential Fox News, backed Trump. Prime time TV host Sean Hannity denounced Flake as part of the “pathetic, weak, gutless, spineless, never-Trumper establishment” within the Republican party.

Breitbart’s three-word headline which flashed across its homepage following the Flake speech captured the conviction that, in the battle for the heart of the Republican party, the anti-establishment wing is in the ascendant: “Winning: Flake Out.”

For the moment at least, the Trump brand of Republicanism seems to have the wind in its sails as support among Trump’s base holds up.

Faced with the prospect of well-funded primary challengers from the right in next year’s mid-term elections and further down the line, most Republicans chose this week to be silent .

Flake’s speech, with its imploring message to Republicans that “this is not normal”, may go down in history as a powerful example of political independence, the moment when one Republican at least had the courage to publicly challenge Donald Trump. But it will more likely be remembered for the silence that greeted its delivery, and the failure of others to speak up against something they believe is wrong even when it may be against their own interests.

For those who worry about the presidency of Donald Trump and the corrosive impact his language and policies will have on American life and political culture, this week was a dark moment.

The prospect of a two-term Trump presidency has just got closer.

1 Further restrictions expected for Dublin if Covid-19 infection rate does not stablilise
2 Why are men still explaining things to women?
3 Three Covid-19 mistakes Ireland urgently needs to learn from
4 Teenager (14) one of five children placed in spit-hoods by gardaí
5 Dublin farmer discovers overnight rave on his land
Real news has value SUBSCRIBE