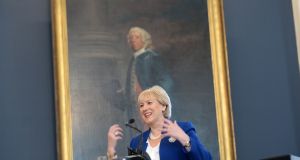 Minister for Arts Heather Humphreys: she and her team should review the newly expanded “auspices” of Creative Ireland and consider how taxpayers will respond to the creation of a secretive, parallel institution for disbursing public money. Photograph: Dara Mac Donaill

Earlier this year, the chair of the Arts Council, Sheila Pratschke, welcomed the advent of a new entity, Creative Ireland, and spoke in favour of its role in making Ireland’s international reputation for excellence and innovation in the arts a part of every government department’s planning.

Creative Ireland emerged from the Government’s broad Culture2025 (2016) strategy document, which itself followed up on the Arts Council’s 10-year strategy for developing support for artists and engagement with the arts, Making Great Art Work (2015).

In tandem with the development of the Creative Ireland initiative, the Taoiseach’s commitment to doubling arts funding promised that Ireland’s artists would be increasingly supported and enabled to make new work. The side-effects of this work in terms of events, visitor attraction, and an enriched engagement with civic spaces are as well-known to economists as they are to readers and theatre-goers and festival directors.

However, the recent budget did not consolidate these twin developments. The budget did not back the Arts Council as it had been expected to. Instead the independent arm’s-length relationship between arts funding and the Government, so vital to transparent and merit-based decision-making, has been called into question.

The budget, via the Department of Culture, Heritage and the Gaeltacht, reallocated €5 million to Creative Ireland but what is most striking is the reboot of that organisation’s role, as an alternative agency for funding the arts, that is, performing a role legislatively enshrined as the Arts Council’s.

In these pages, Heather Humphreys outlined this radical reversal of roles in arts funding in Ireland, presenting as a fait accompli the subsuming of the legislatively independent Arts Council into a newly conceived Creative Ireland. This latter might be described as part-car, part-temple, part-group-hug and part-energy-drink. But what will happen if Creative Ireland does become “the new implementation vehicle for art, culture and creativity as a whole. Through its five pillars, it embraces and strengthens our existing cultural output, while also introducing new, targeted initiatives”?

How will Creative Ireland’s largesse be distributed? What kinds of application processes, peer reviews and long-term planning will influence how taxpayers’ money is spent? We do not know. What if Creative Ireland, unknown to us, funds a select number of Arts Council organisations with no open, clear advertising or application procedure, and no transparent assessment? It would distort these organisations’ relationship with the council and be unjust to the vast number of excluded organisations, while its conscious undermining of the autonomy and independence of the Arts Council would be a step on the road towards political control of arts funding.

The work of the independent Arts Council, since 1951, has been to develop open and fair processes for the awarding of funds to our partner organisations and to individual artists. Constantly adapting to changes in the country and in the artforms it supports, the Arts Council independently makes evidence-based decisions about future planning. New schemes such as the Open Call and Next Generations programmes, which were at the heart of the successful 1916 centenary, showed that the council continues to adapt and meet the challenges facing artists and the arts in the 21st century.

Humphreys and her team should review the newly expanded “auspices” of Creative Ireland and consider carefully how taxpayers will respond to the creation of a secretive, parallel institution for disbursing public money.

They could do worse than looking at the Australian experience where a parallel funding stream with no clear processes has been quietly retired.

A crisis engulfed the world of Australian artists and arts organisations in 2015 when George Brandis set up, alongside the Australia Council for the Arts, a separate, parallel funding stream for the arts, called Catalyst: The National Programme for Excellence.

Australian writer Ben Eltham was one of many who pointed out the flaws: “The draft guidelines for the programme give final say to the arts minister himself, and peer review is rudimentary at best. The guidelines also appear to allow the arts minister to give out grants in secret. A pattern is emerging: increasing secrecy and personal ministerial control over cultural funding. No wonder artists and arts leaders are worried about the federal cultural policy direction.”

The Arts Council, currently in the middle of its painstaking, annual decision-making processes, should continue to be valued and supported in its commitment to supporting artists and engagement with the arts.

John McAuliffe is a poet, professor of modern literature and creative writing at the University of Manchester, and deputy chair of the Arts Council.

1 Coronavirus: 20km travel limit may be scrapped early as Ireland moves to exit lockdown
2 California police fatally shoot 22-year-old man on knees with hands up
3 ‘Get the eff out of this country’: Irish racism, as heard on Liveline
4 Donald Trump is in trouble, and that could spell very bad news
5 Covid-19: Wage subsidy and unemployment payment extended to end of summer
Real news has value SUBSCRIBE