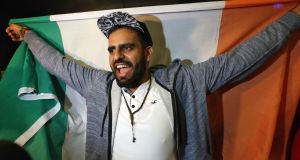 It was a day his family long yearned for – and one that, in their darkest moments, they must have feared would never come. The sight of Ibrahim Halawa beaming with happiness as he was reunited with his family at Dublin airport brought joy and relief, not least for those – family, friends, politicians, officials and activists – who worked tirelessly for his release.

After four years in jail in Egypt – most of it spent waiting for a farcical mass trial in which, it turned out, there was no evidence against him – Halawa was acquitted of all charges. That brought an end to a scandalous saga that began in August 2013, when Halawa was detained in Cairo during protests against the ousting of then president Mohamed Morsi of the Muslim Brotherhood. Aged just 17 at the time, Halawa spent four long years in dire conditions in overcrowded prisons, his physical health deteriorating and his morale dipping with each delay in an interminable legal process. The case, which required the most intensive consular operation ever mounted by an Irish government, is an indictment of Egypt under President Abdul Fattah al-Sisi.

The scenes of jubilation at Dublin airport yesterday are vindication for all those who argued Halawa’s case, who joined rain-sodden protest marches, who highlighted his case in the Dáil and European Parliament, visited him in prison, lobbied Egyptian authorities, ran campaigns, wrote letters of solidarity and did what little they could to stop the world forgetting about him. Above all, the happy conclusion is a tribute to Ibrahim Halawa’s own fortitude in the face of unspeakable hardship.

He now faces a difficult adjustment. When he was arrested in 2013, Halawa had just sat his Leaving Cert. His friends have now gone through college or taken different paths as adults. Ibrahim will never retrieve the life he had as a carefree 17-year-old. Nor can he seamlessly pick up the life of the 21-year-old he would have been had his ordeal never happened. But at least now he will have the space to begin to put his Egyptian nightmare behind him and carve out a new life for himself.